‘Completely out of the blue’: Canadian commander back in charge in Afghanistan

“I have commander’s intuition on this, but I am a little bit new on the ground to say it for sure, so I’ve challenged my staff to figure this out,” he said.

“It is important to us because we want to make certain we use the right techniques in the right places so that we don’t jeopardize our capacity to hold and produce the right counter-insurgency effect where good governance can take root or where there is a heavy weight of out-of-area fighters that need another method.”

Marc Courtois, chairman of the Board of Canada Post, is pleased to announce the appointment of 6418 Stewart Bacon (CMR) as interim President and Chief Executive officer of Canada Post. His appointment is effective July 15, after the departure of outgoing President and CEO, Moya Greene, who recently accepted the top position at Britain’s Royal Mail.     Read the entire article Here 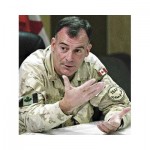 While its combat mission in Afghanistan will end in 12 months and military success in the country is not yet in sight, the senior general overseeing Canada’s war against the Taliban said the “legacy” that his troops will leave is that “we held the ground here for 5 1/2 years.”

“There was no way that Afghan forces could have held Kandahar City without us,” Lt.-Gen. Marc Lessard told reporters Tuesday at the end of a five-day visit with front-line troops and with top NATO commanders in Kabul.

A Kingston native has been asked to be part of an inquiry investigating Israel’s attack on a flotilla heading toward Gaza.

Brig. Gen. Kenneth Watkin, who retired earlier this year after completing a four-year term as the Canadian Forces’ judge advocate general, was born and raised in Kingston.

The former top military lawyer has been asked by Israel to be one of two international observers — along with Ireland’s David Trimble — of the internal inquiry. 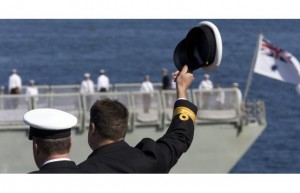 Commodore Ron Lloyd of the Pacific Fleet, right, takes his hat off to the crew of Australia’s HMAS Newcastle FF G 06 – Adelaide Class Guided Missile Frigate as it makes its way out of the harbour.