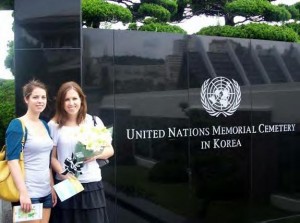 Justine Brown (left) and Lauren Schultz stand beside the United Nations Memorial Wall in the United Nations Memorial Cemetery in Busan, Korea. It lists the names of nearly 42,000 servicemen and women from 21 United Nations allied nations (excepting the brave ROK servicemen and servicewomen of the Republic of Korea) who lost their lives on Korean War service. Lauren is the granddaughter and Justine is the step-granddaughter of H2951  Ramsey Withers (RRMC RMC 1952), Canada’s former Chief of the Defence Staff. They carry flowers and cards to place on the grave of 2996 Lieutenant Arthur Herman (RRMC 1948), a close friend and former classmate of Ramsey Withers, who was killed in action with Ramsey’s Regiment, le Royal 22e Régiment, in August, 1952. It is the second year in succession that Lauren has handled this mission for her grandfather. He reports that he is proud and thankful for the remembrance and kindness of both of his granddaughters. Lieutenant Arthur Graham Herman left Royal Roads after his first year and completed his degree at Acadia University before being commissioned in le Royal 22e Régiment du Canada, in 1951. He was posted to 1st R 22e R and proceeded to Korea with the battalion in the spring of 1952. He was killed in action along with three members of his platoon, by an incoming 122 mm shell, on Hill 210, on 19 August, 1952. He was 24 years old. Had he lived, Lieutenant Herman would be 81 in 2009.

When he was a young lieutenant serving as signals officer with le Royal 22e Régiment du Canada, Ramsey Withers visited with his good friend, Lieutenant Arthur Herman, who was commanding an infantry platoon in the same regiment. Lieutenant Withers had just graduated from the 1952 Class of the Royal Military College of Canada and like most graduates immediately volunteered for service in Korea. Lieutenant Herman had been a member of the class in its first year at Royal Roads Military College in Victoria, British Columbia. Instead of moving on to RMC in Kingston, Ontario, with his classmates, Arthur Herman enrolled in another university and graduated with a civilian degree. He, too, enlisted for service in Korea and thus they met once again, but this time in action. Lieutenant Herman and three of his men were killed by shellfire on Hill 210 a few days after the last time that Lieutenant Withers met with him. It is noteworthy that Ramsey Withers stayed with the Canadian Army, rose in rank to full general, and retired as Chief of the Defence Staff. Lauren Schultz (left) and Justine Brown place flowers and memory cards at the grave marker of Lieutenant Arthur Herman, who has been buried in the United Nations Memorial Cemetery in Busan these past 57 years. His comrades and classmates from the Royal Military College of Canada have never forgotten him. Two of the men who were killed in action beside him rest in graves by his side. Rank did not separate them in life, nor does it where they rest. The motto of the R22eR is “Je Me Souviens,” We will Remember! Ramsey Withers’ granddaughter, Lauren Schultz this year returned to Korea for her second tour of duty as an English language instructor at a Korean university. Early in August, when General Withers’ step-granddaughter, Justine Brown joined her, they went to the United Nations Memorial Cemetery in Busan to place flowers on Lieutenant Herman’s grave.General Withers and others from the RMC Cla ss of 52 had Lieutenant Herman’s name engraved on the Memorial Arch at the Royal Military College in Kingston. A Monument in his honour and memory was also placed outside Royal Roads Military College, which has since become a civilian university. The years may go by, but Comrades are not forgotten. Here is what General Withers’ granddaughter, Lauren, wrote to him by e-Mail: “As last year, when I visited with my Korean friend Juni Shin, there was rain for the length of our visit to Art’s grave. I kneeled and said a prayer for Arthur and gave thanks for his sacrifice, and for yours, and for the blessing that it has brought to the people of South Korea. Afterwards, we all toured the memorabilia hall, and we also had the chance to watch a video outlining the history of the war, the cemetery, and the meaning of both for the Korean people.” Photos and article reprinted from the Korean Veteran’s Newsletter