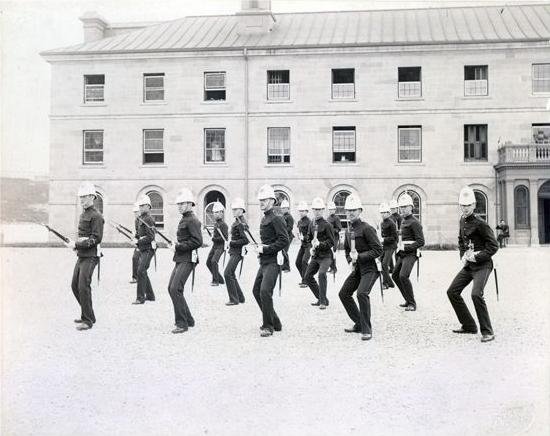 While the college’s first year class was engaged in a lengthened morning of wholesome FYOP activities, Wednesday saw the second years, out on the parade square reviewing parade drill in preparation for the upcoming first year graduation parade. The four cadet wing divisions were led by their peers through a series of standing and marching drill movements, culminated by a couple of brave volunteers from the division to try their hand at calling drill commands for themselves. The session was a review as most of the actual teaching had taken place while the second years were on their Basic Military Officer Qualification course over their summer in St. Jean sur Richelieu. A review was necessary as most second years had had two weeks of break from any kind of foot drill, and as a result the session started off with the cadets being rather rusty but quickly picked up as the second years got back into the swing of things, motivated by a possible early dismissal if their performance warranted it. By the end of the lesson, the second years had come together and started performing some acceptable foot drill although more practice, specifically rifle drill, will be needed before graduation parade rolls around.

The third year class had a briefing concerning how to properly teach a class and putting together a training plan. The briefing was given by Lt. (N) Durand, and the goal was to make sure that the third years will be able to teach a class to their peers and future subordinates in the standardized way used across the Canadian Armed Forces as well as put in perspective how course training plans (such as the one we follow here at RMCC) are put together. After graduation each third year will be posted to their first unit, and will be thrust into a training role, being expected to teach classes to men and women of varying ranks and ages. Therefore it is important for all OCdts, not only the third year class to be able to comfortably and confidently put together and deliver a lesson to both large and small groups. Beyond this, the third years learned that lesson and training plans could be used in order to allow us to prepare for future courses that we will take by reading the learning expectations that will be bestowed upon us. Perhaps the most important thing that the third years learned was to be able to say “I don’t know” if you do not have an answer. It is better to come back to the class with a definitive answer rather than a vague, incorrect answer.

After the September 11th commemorative parade, the college’s fourth years spent the morning learning and refreshing their knowledge of some of the administrative measures of the Canadian Armed Forces and the College through thorough and comprehensive presentations, covering topics such as medical categories, leave allowances, corrective measures and college sanctions. As many of the fourth years are senior barmen, the understanding of punitive and corrective measures is crucial for their development as junior officers. After a series of lectures were presented about some of the basic knowledge of the Canadian Forces. In the future, lectures will be presented on the Air Force, Army and Navy, respectively, to broaden the cadet’s range of knowledge about other branches. More on Professional Military Training The Commando Challenge, a yearly competition that is run out of the CFB Kingston as part of a wider military-civil outreach program. In this competition, several teams representing different civilian institutions will compete for the much vaunted “boot”; all proceeds made from donations and team contributions then go to United Way.

This year, 12 teams participated in a difficult course that was designed to test both their physical endurance and their ability to work as a team. The challenges each team had to face were a marksmanship challenge using C7s on a 100m range, a confidence course, a combat simulation, the evacuation of wounded soldiers, the setting-up of a bivouac and an activity that involved teams donning military kit as fast as possible. Most activities were designed to give each team a glimpse into military life by allowing them to perform tasks that soldiers would perform in combat scenarios or everyday situations.

Each team was assigned a pair of guides and, in the interest of offering a fair representation of NCMs, Officers and Officer-Cadets, half of the guides were provided by RMC. Thus, Officer-Cadets from the college were able to interact and share their experience with members of the general public while acting as mentors during the obstacle course.

The challenge wrapped up with a tug-o-war competition. The competition then ended wand was followed by an open-air BBQ. To note was the participation of our DCdts, LCol Pat Lemyre who led his team along the College Chief, CPO1 Keith Davidson and Warrant Officer Desjardins. Naomi’s warriors, homage to LCol Lemyre’s young daughter, came in hard fought 5th place.

All in all, the event was a success with many participants being very impressed at the professionalism displayed by the RMC guides. These sentiments were echoed by both the base commander, Colonel F.J. Chagnon as well as LCol Lemyre. The wrap-up for the 2013 edition was an excellent reminder that the excellent civilian-military relationship that Kingston enjoys are the result of a continued effort by the military to reach out and interact with the local population in a positive way while making a difference.