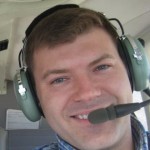 22259 Adrian Travis joined the Reserve Entry Training Plan at RMC in 1998 with a view toward studying aviation and entering a career as a pilot with the Primary Reserve Force.

“I always had an interest in aviation and generally gravitated towards the Air Force,” Travis recalls. “I was a good fit there; it was the only thing on my mind for university.

I had originally intended to go through the pilot track, but I think at the end of first year [I] sort of jumped out and said, Hey, you know, as much as I like aviation— I see that as sort of a part time passion rather than a long-term career option,” he explains. “I’m still active in aviation right now— I’ve been flying since I was seventeen— renting airplanes occasionally just for fun. But I thought a career in business was probably going to be a bit more lucrative. And probably keep me more mentally busy, I guess.”

After graduating from the College in 2002, Travis began a Masters degree in Management at the London School of Economics in 2003 while working as a part-time reservist at 400 Tactical Helicopter Squadron at CFB Borden. Over the course of the next several years, he would continue his work with the Reserves while also beginning his foray into the business world, including a stint in Tokyo.

“I spent a good chunk of my time living in Tokyo, learning Japanese, and was turning around businesses in Asia,” Travis says. “I finally quit that job after three years, and then in 2008— you know it was funny, the month before the stock market crash I went out on my own and started my own company, a management consultancy.”

“It was, at least on paper, a terrible time to do that kind of thing, but the company flourished,” he continues with a note of . “It started out just myself and a laptop, but it’s actually grown now— we just made the Profit 500 list of fastest growing companies in Canada. It’s kind of been a remarkable Canadian success story; a terrible time to launch a management consultancy but a rare success story there.”

Today, Travis excels in a business development role at the firm, Trindent Consulting, acting as what he calls the “chief cheerleader” for his staff and bringing in new business from across Canada and beyond. Choosing their clients carefully, Trindent works mainly in the fields of oil and gas, healthcare, and financial services.

“I spend a lot of my time in Toronto sort of charting the strategy for the firm and training and hiring,” Travis explains. “When I started out I was basically doing all the work, and then you sort of transition into managing the people and management teams, and then you start thinking about business development, knowledge leadership, and all those sort of higher order functions where now I’m basically like the chief cheerleader in the organization. Responsible for strategy and keeping everybody aligned.”

Looking back on his time at the College, Travis credits his experiences there with preparing him mentally for the high-stakes world of business, especially in a time of economic downturn.

“Starting a business is a bit gut-wrenching, but I think the time at the College absolutely prepared me for maintaining sort of a cool head under fire. That’s really what’s needed cause there’s some mornings you wake up and you go to work and you just want to puke and there’s lots of bad news, but being able to keep a positive outlook so your staff and your team doesn’t drop anchor [is really important]…” the ex-cadet explains. “I think managing people, managing morale, managing stress… [with] all those things, the College was excellent preparation for business. Because I think that in the business world, at least the one I’m operating in, there’s a lot of unpredictable situations and being able to respond to that confidently and without losing your head, I think that’s probably, in retrospect, the one big thing that the College left its stamp on [for me].”

Not content to rest on the laurels of his company’s impressive success, Travis continues to look ahead to the next horizon, the next hill to be taken.

“We’ve got a very aggressive and ambitious growth trajectory here that we want to maintain,” he explains. “It’s a hard thing to do to grow a business that fast and keep it out of the red.”

Apart from his admittedly busy life of maintaining a growing business, Travis continues to fly recreationally and keeps an active lifestyle along with being the proud father of a two-year-old son. As his company reaches new levels of self-sufficiency he also finds himself able to begin to reconnect with his military roots.

“The first five years of starting the business were certainly a big challenge and took a lot of my focus, but now that things are calming down and getting more into a routine corporate structure, I’d love to become more active in the Foundation, more active in Kingston,” he says. “I’ve made a lot of great hires into the company of ex-military personnel [too,] that— they’re excellent critical thinkers, and they take the hill— they don’t let you down when you give them something to do.”

Jen Ochej is a journalist and freelancer in the music industry, currently completing an internship at Eggplant Entertainment in Toronto as part of the Government of Nova Scotia’s Emerging Music Business Program. She is most often found wherever live music is being played and dreams of one day working as a Tour Manager. She is a regular contributor to e-Veritas and has also contributed an article which was published in the RMC Club Veritas magazine.