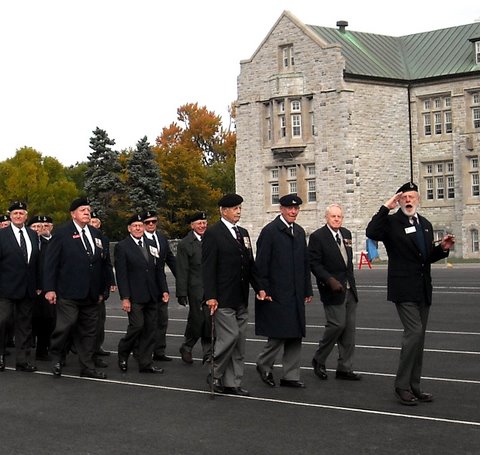 Reunion Weekend -2008: Three members of the RMC Entry Class of 1938 marching slightly ahead of Old Brigade Squadron #1 with eyes right as they pass the reviewing stand en route to the Memorial Arch. They are 2652 Brit Smith (see article at the end of this article), 2660 Edwin Peto and 2639 Lloyd Kenyon (gentleman with no beret) under the command of the Old Brigade Adjutant, 3918 Al Roberts. The reviewing officer was another member of the Class of 1938, 2618 Norman Bayley. 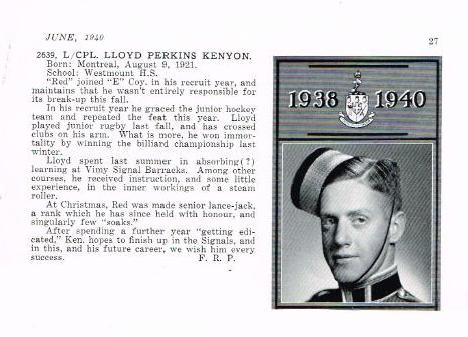 He departed the college as a War Graduate in June 1940. He served with the RCE within Canada until 1942. He went to North West Europe and served there (see write-up below) until early 1946. He released from the army in 1947. He completed a BEng (Civil)  from McGill University. He married his wife, Winnifred – 17 April 1949. 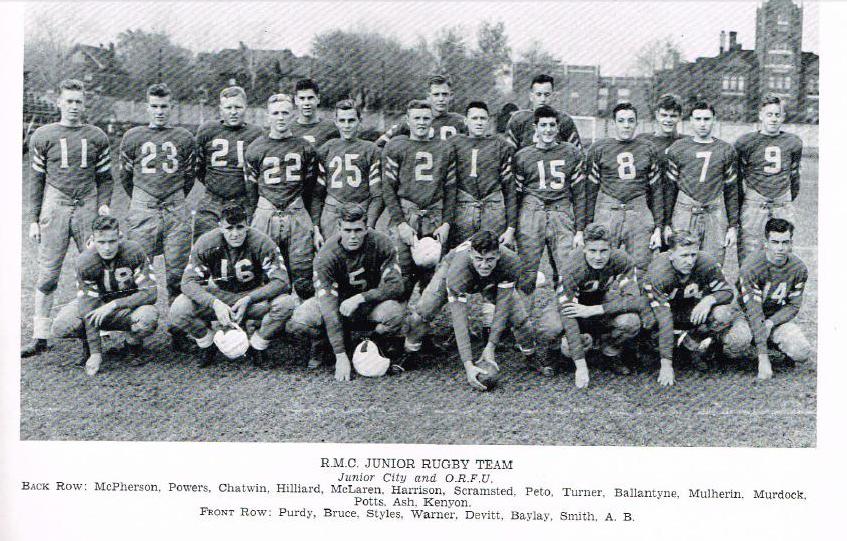 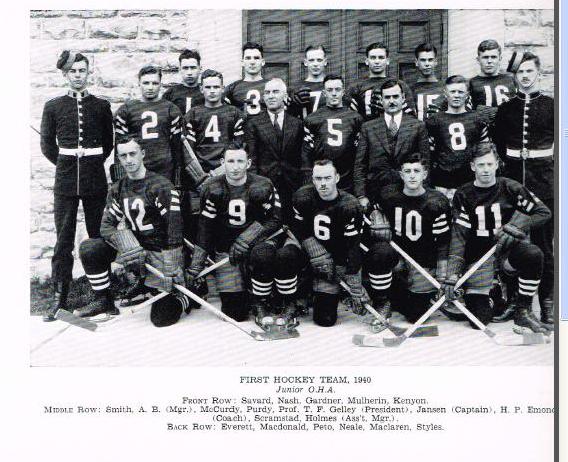 Lloyd, has been awarded the rank of “Knight of the French National Order of the Legion of Honour”. He is now 93, living in the KWing at Sunnybrook Veterans Centre (which he literally built during his career in the construction business) and up to now, has been in relatively good health. Lt Lloyd Kenyon landed with the 16th Field Company RCE in the first few minutes of D-Day on NAN beach as part of the 3rd Canadian Infantry Division. Lt. Kenyon commanded 3 Platoon and was in support of the Régiment de la Chaudière. The platoon’s initial job was to clear mines and obstacles on the beach in order to allow the 8th Infantry Brigade, i.e. The Queen’s Own Rifles, Le Régiment de la Chaudière and the Canadian Scottish Regiment to move inland. The 3rd Division held the record of making the greatest inroads in the first few days of D-Day. Caption: D-Day Beach is from his trip to Normandy on the 60th anniversary of D-Day. This is the original taken by Andy Clark of Reuters which was featured in the Globe and Mail. He is standing with RMC classmate, Bud Peto, looking out over Juno Beach.

The battles at Falaise are also well known, but the involvement of the 3rd Division, the 8th Brigade and, therefore, the 16th Fd Coy RCE at Tron are not well known. This group was part of the “cork in the bottle” that helped avert a full fledged escape by the remnants of the German V and VII Armies. This was the decisive battle of Normandy and therefore the decisive battle in France.

Within days, the fight advanced to the Seine and the liberation of Paris in late August, 1944. The 16th Fd Coy were part of that battle as well.

Lt. Kenyon was promoted to the rank of Captain on December 20, 1944. He was awarded a MiD (Mentioned in Despatches) on 5 October 1945. Later on, he held the rank of Major of the 9th Fd Sqn (part of the 4th Canadian Armoured Division) and brought them home to Canada in January 1946.

Lloyd Kenyon ( Lieutenant, Captain & Major) led portions of the 16th Fd Coy, RCE from the first beach assaults on D-Day through to the liberation of Paris. He represents the 200 men of that Company that fought for the liberation of French soil and they all deserve the “Ordre national de la Légion d’Honneur”.

A note from son, Tom to family & friends:

Unlikely known to you is that France has chosen to honor 300 former soldiers from each of Canada, Great Britain and the United States who participated in D-Day and the liberation of the country in the 2nd World War. To our surprise, on February 5th we were thrilled to learn that Dad had been awarded the rank of “Knight of the French National Order of the Legion of Honour”, by order of the President of the Republic of France. This distinction is France’s highest national order, and is on par with our country’s Order of Canada.

This medal was awarded in recognition of Dad’s “professional involvement in the liberation” of France during the 2nd World War and in particular, the efforts starting with the D-Day offensive through to the liberation of Paris, over 70 years ago. This award is meant to not only honour Dad, but through him, the sacrifice of thousands of Canadians in the campaign to liberate France, many of whom lost their lives.

We are very grateful to Mr. Malcolm Hamilton, a member of Dad’s legion, for patiently pursuing the application process with the French government. Malcolm learned of Lloyd and his involvement in France through their mutual friend Bill Milhausen, a 97 year old Royal Canadian Engineer who fought in Italy with Malcolm’s father. Malcolm took it upon himself to interview Dad in the winter of 2014 and make application to the French Government on his behalf. He only learned of the positive decision by the French in late January, at which point he passed the information on to us.

As we are sure you know, Lloyd would never consider himself a hero. He is a proud Canadian who, like so many other brave Canadian men and women, fought for their country because that was what they were called on to do. At the age of 93, this award is a timely recognition of a life well lived by Lloyd and those he fought with.

More than 70 years past the end of the Second World War, Dad and thousands of Canadian veterans in their late 80s and 90s are watching as hundreds pass away each month. We are eternally grateful to have had them all go before us, as it will not be too much longer before all we will have will be the memories of those loved ones and their awards left behind.xxx 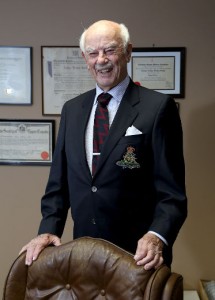 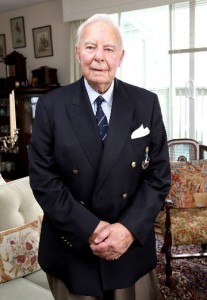 Two other Ex Cadet recipients of the “Knight of the French National Order of the Legion of Honour” : 2652  A. Britton Smith and 2816 William Turner   – Kingtston Whig Standard article Here