“I have to concentrate pretty hard on a stiff straight face because these recruits are obviously scared as hell on their first charge and I can’t get over the fact that it’s not me in their boots.” 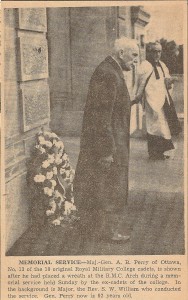 As we’ll see , the beginning of October ’52 was rich in events. One of the highlights of that month was the attendance of Major-General A.B. Perry, No. 13 of the original class of 18, at a memorial service held at RMC during a weekend that would also see the largest parade in the college’s history,  parade which would be reviewed by Brig. J.M. Rockingham.

It was a long sleepy day for the 4 above mentioned cadets – too much weekend. Pete Chisholm + I hold our first orderly room cases. I have to concentrate pretty hard on a stiff straight face because these recruits are obviously scared as hell on their first charge and I can’t get over the fact that it’s not me in their boots. All our recruits are pretty keen with three or four exceptions.

Another wing drill parade after classes. We have only had two now and badly need drill for the opening ceremonial parade. The worst flight from the standpoint of spirit, will to make a good show, or whatever you want to call it, is the third year flight. They’ve had little or no drill all summer I suppose, little responsibility on parade. Recruits have what they lack but just haven’t got the drill experience.

With the arrival of the RCR Band, we have realized that tomorrow is really going to be the opening day. The “dress rehearsal” after classes showed that we could stand a lot of improvement. Mr. Coggins was there too in his inimitable way. His wife who we all know has been a helpless invalid for years now died two days ago and her funeral was yesterday. I’m sure he’ll lose something of that strained look he used to have at times. After the parade I got a working party of recruits and we started putting down the lines on the rugby field. By 1900 it was pretty dark so we stopped. This morning early we found that some of the lines we put down last night were in the wrong places and some terribly curved. So the lime had to be whisked away with brooms. We finally got the field well laid out. Parade was at 1100, a two hour one. Tony Hampson made several slips, but it’s his first big parade. The whole show was much better than yesterday’s practice. Brig. Rockingham had muttered an “inspiring” address after the prize giving. He cuts quite a swath with his long crooked cane. Mother & Dad arrived in time to see the parade and came out for the rugby game with McGill Indians in the afternoon. There was a tremendous wind blowing which our team took advantage of to win 21-2. Donny played a very good game and no doubt will go to Halifax. We had dinner at the Fort Henry Hotel with Mr. & Mrs. McDougall and then Dad wanted to see Don so we came back to the College & I buzzed off to our class wiener roast. It’s really been a full day!

Church parade this morning was very good – Col. Bannister gave one of the best sermons I’ve ever heard him preach – on intolerance. The ex-cadets fell in and marched up to the arch with perhaps 30 from the class of ’52 at the extreme end of the column. Then Fritz, Rev & I went in for a feast at McDougall’s where we gorged ourselves. Tonight we saw some shots from the movie they were making here last year. It was so badly cut there was no continuity or story and a lot of the part remaining was pretty horrible. 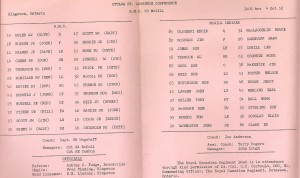