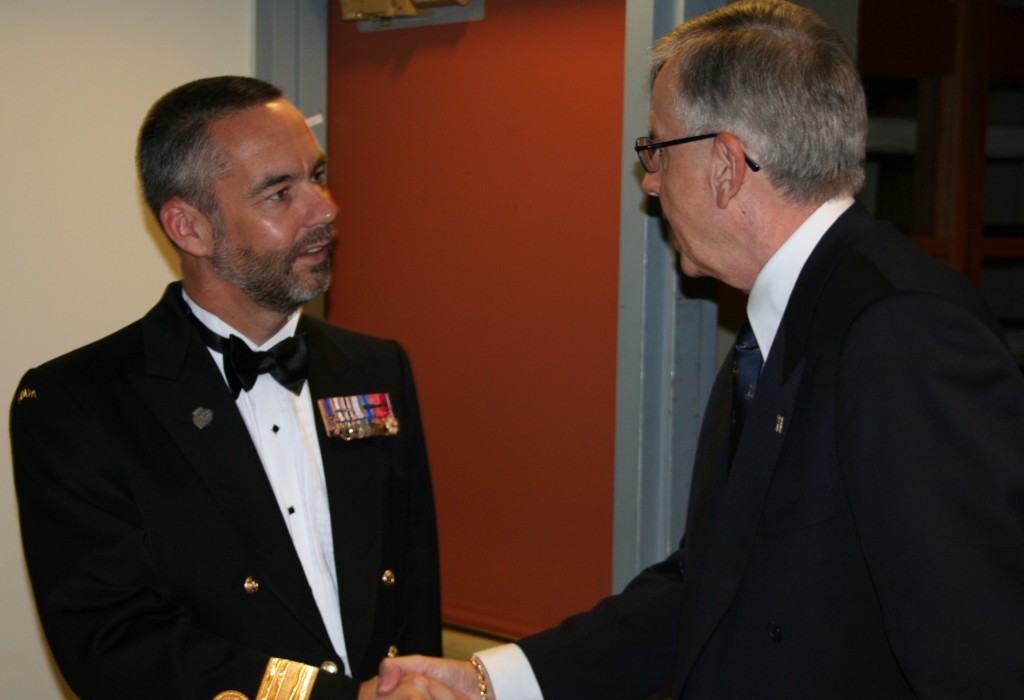 On Friday evening, the College was very pleased to host 6513 Capt(Ret’d) John (RMC ’65) and Mary Bart for the annual Bart leadership award. Mr. and Mrs Bart are tremendous supporters of RMCC and their generosity enables a broad range of Cadet activities. At the dinner, Capt Bart recognized the individual leaders in each of the flights and also “Tango” flight, winners of the 2010 obstacle course.

In his brief remarks, the Commandant noted the critical role that Alumni, such as Capt Bart, play in supporting the College through their generosity. He stressed the fact that the Bart Award is focussed on the key product of RMCC – trained and educated Leaders. He also highlighted the tremendous work of the RMC Club and Foundation in supporting the College in keeping Alumni connected and in achieving the “Margin of Excellence”.

On behalf of the entire College – thank you very much to John and Mary for their strong commitment and generosity – it is valued and appreciated!!! You are making a direct and significant contribution to the training and education of RMC cadets.

“The dinner was a great opportunity to share stories and insights on FYOP, with our fellow flight leaders, but also about our future careers with all the officers that were present. It also allowed me to feel even more like I am part of this great team – RMC”

A group of happy and justifiably proud I Years reaped the benefits of their efforts through First Year Orientation Period (FYOP) and in particular, their individual and team efforts through the Obstacle course that was run four weeks earlier.

6513 John Bart (RMC ’65) established two Endowments with the RMC Foundation for the purpose of recognizing excellence in leadership and teamwork back in 2001. On the surface, it was a “no brainer”. There was no better way to acknowledge leadership and teamwork at RMC than through the annual obstacle course race held at the end FYOP.

John Bart had this to say about the 2010 Dinner. “The entertainment this year was terrific. In addition to demonstrating notable dancing talent, it highlighted the strong camaraderie among senior and junior cadets in Tango Flight. I don’t recall such an embracing environment when I was there; it’s much better today.” He also added. “Mary (his wife) shared with me that she thought last evening’s event was the best yet, and I am in full agreement.”

“The Captain Bart Teamwork Prize” is awarded to the First Year Team that wins the College Obstacle Course Competition. As the 2010 Champions, Tango Flight had the honour of making a donation to the Commandant’s Discretionary Fund, enjoy a private dinner, and also receive a memento (as selected by the Commandant) to reflect their significant accomplishments.

“The Captain Bart Leadership Award” is awarded to the first-year OCdt in each Squadron that demonstrates the highest level of leadership during the College Obstacle Course Competition.