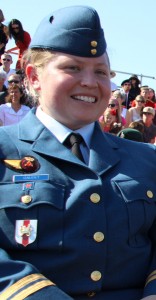 Before arriving at RMC, Captain Gaudet served at 1 Wing, managing maintenance for the Griffons. “It’s similar to managing the Cadets,” she said, smiling. “83 Cadets – 83 helicopters, each with their own administrative needs, qualifications and applications.” Hoping to get posted to Gagetown, she is nonetheless enjoying her position as a Squadron Commander. Specifically, the opportunity for mentorship – a hands-on experience with the third- and fourth-years that will soon be leaving the College to manage units of their own.

Like many of the other SCs, Captain Gaudet’s path through the Forces is wildly varied with the familiar story of the cadets at RMC. She began as a Direct-Entry Officer, immediately going through Basic training and progressing into her occupational phase training. As one who did not have the RMC background, she came to the College fresh to many of the campus’ traditions, an experience of which she has come to especially enjoy. Indeed, she enjoys a special bond with 3 Squadron, encouraging a friendly talking policy that invites Cadets of all years to visit and share their problems – or successes. Captain Gaudet explained that having the ability to share those concerns before they turned into real problems was a crucial preventative measure officers must be prepared to shoulder. Not only did it provide a bond of trust between superior officers and their subordinates, but it helped clear issues before they began snowballing into other areas of College life – a very real threat in the fast-paced schedule of the cadets.

At the end of the day, Captain Gaudet is a friendly, open SC seeking to provide the example of officership she herself would follow.

– 2000 Hang out with puppy and Gilmore Girls on Netflix

– 0900 walk through and candy delivery of sqn

7 Days in the Life of a Squadron Commander – Pt I

7 Days in the Life of a Squadron Commander – Pt. II