Badging Ceremony: A Most Welcome Tradition

The Obstacle Course parade on Friday was a riot of color, noise and excitement – and now Saturday would reflect the solemn commemoration of the Class of 2018 joining RMC’s ranks.

In this tradition, RMC is alone. Few other universities of Canada have initiation periods, and none require their first years to develop as isolated units within each fraternity – in this case, the twelve squadrons making up the College’s student population. Even more remarkable still, there is a powerful sense of pride in being a member of the RMC community, a sense that is denied to all first years until they complete the nightmarish First Year Orientation Period, commonly known as FYOP. 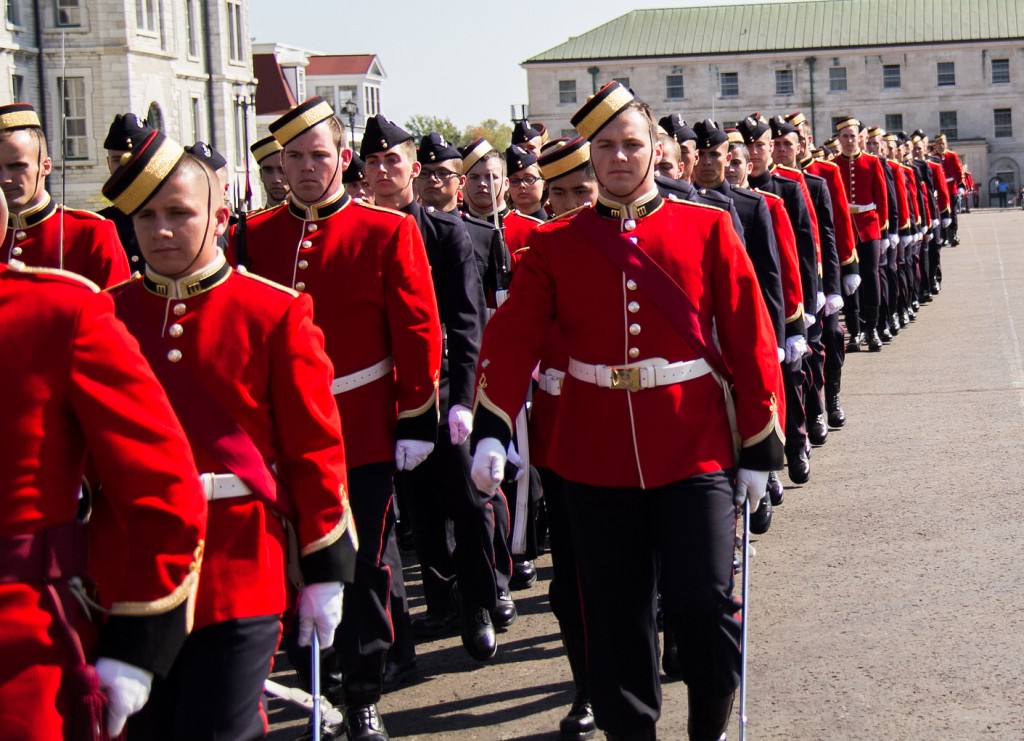 Unlike other schools, where the first day marks an entrance into the university’s history, first years are required to prove themselves and more importantly their common identity as a team of thirteen to fifteen individuals, and only after they have done so will they be recognized as members. This formality is marked by the Badging Ceremony.

It has become tradition that the first years, wearing their dark blue formal uniforms, stand off to the side of the parade square as the College makes its rounds in the familiar scarlet 1800s-style tunics. While the College demonstrates its drill and deportment to reviewing officers of the highest brass, they are made to stand quietly, wearing the Canadian Forces cap badge (referred to by senior years as a ‘cornflake’), and watching the proceedings. Halfway through the parade, the Class is marched on, standing in front of the silent College procession. It is at this point that one of the College’s favorite traditions takes place; Ex-Cadets and members of the Old Brigade come forward, bearing the coveted RMC cap badges, and go one by one to each Cadet. After speaking to these graduates of RMC, the newly initiated are permitted to switch out the badges (whereupon the cornflake will be buried as deeply as possible in the closet while still being grudgingly accessible, just in case). It is this link between the former and the new Cadets that marks what RMC cherishes – remembering.

As the Forces move on and each generation of new officers arrives, it is a critical lesson to remember and befriend the past, understanding where it comes from so past mistakes may be avoided and past triumphs acknowledged. This is the burden that first years of RMC take on, having met and exceeded what the College expected of them. It is this that makes them different from any other university of this country. As they turn, welcomed into the sea of red, the Badging Ceremony will ensure that this is the start of what will inspire them to become the best of themselves.