Cadets have their say about the Canadian flag 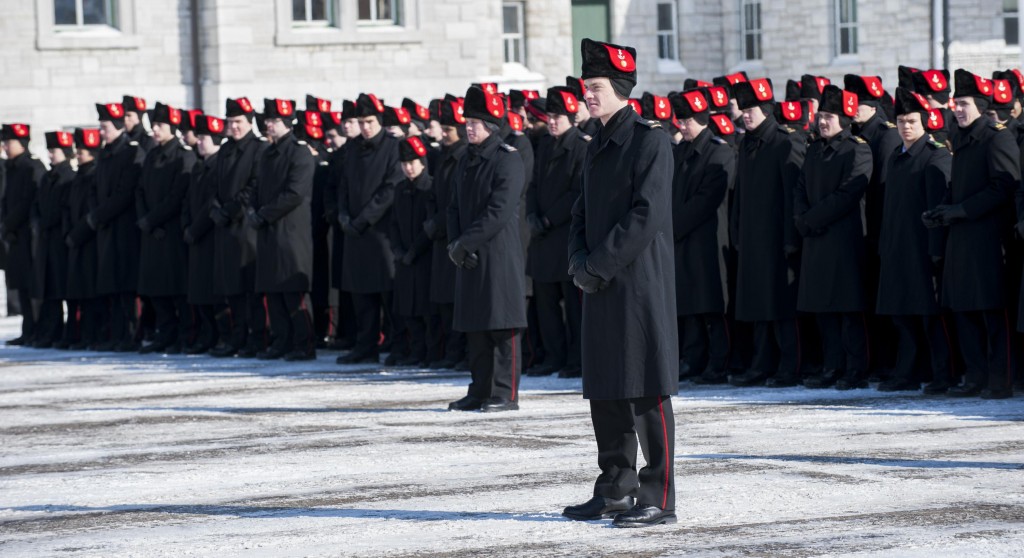 On Feb 15, 1965, a new appearance of flags were raised across our nation. This was not just any old flag; indeed, in the 98 years of Canada’s history, this was the first time an official national flag for Canada was raised.

On Friday, the Officers Cadets (OCdts) of the Royal Military College of Canada participated in the commemorating ceremony of the 50th Anniversary of the flying of our national flag. Over the past years, the flag, though one, has meant different things to different people. This is what it means to some of our own at RMCC:

A country’s flag is often revered as representing the values and traditions held by its citizens, ergo the 50th anniversary of the Canadian flag marks an important point of reflection for all Canadians. This is a time to appreciate what exactly being Canadian and living in Canada entails.

As I was raised in Vancouver British Columbia, I have realized that being Canadian is extremely unique and that our culture is a shared culture; people can travel from around the world and settle in this place knowing that they are accepted for who they are and where they come from. Therefore whenever I see the Canadian Flag I see a country that prides itself in multiculturalism and by doing so has formed its own mélange of celebrations and practices. This is what sets Canadians aside from our southern neighbors and other countries of that matter: for we are a welcoming nation, a homogenous body of people all sharing cultural experiences and contributing to a greater country.

Coming from an Asian-Caucasian background I have been witness to this cultural concoction and I can say with confidence that I am grateful to live in a place where this is accepted. In a world where freedom is limited and culturally exclusive, it is important to take the time to recognize just how fortunate we are to live under the maple leaf.

When the new Canadian flag was adopted 50 years ago, my great-grandfather felt betrayed. He would claim for years 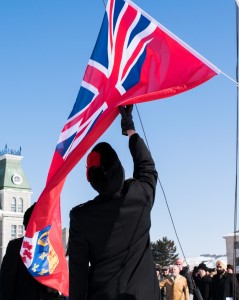 that this was not the flag he and his friends had paid for in blood on battlefields around the world during the Second World War. For him, like many, the Red Ensign was the symbol of Canadians, representing our colonial roots with the Union Jack, the Lions of England and Scotland, the Fleur-de-lys of France, the Irish Harp, and three maple leafs; losing it was devastating.

Today, our new flag shows just one Canadian Maple Leaf that, like the past, rallies Canadians in times of peace and war. The change unified Canadians under a single symbol, unlike the cacophony of symbols that existed on its forbearer. This new flag, though initially resisted by some, has earned its place and represented a unified Canada, distinct from Britain. Over the years, this new flag would be carried to new fields of battle and become the symbol that the world associates with Canadians from all backgrounds, as well as the humanitarian and peacekeeping missions for which we are known.

I would like to think that people like my great-grandfather and those before him helped shape our national identity, which led to the need and the opportunity to adopt a new national symbol. Our sense of nationalism has grown over the years from Confederation, to our new flag, to Patriation and will continue to do so. Both our new and old flags represent our morals, history, and the sacrifices made before us. I am proud to wear the new Canadian Flag on my shoulder and be a member of the organization which helps safeguard the flag and everything it represents. 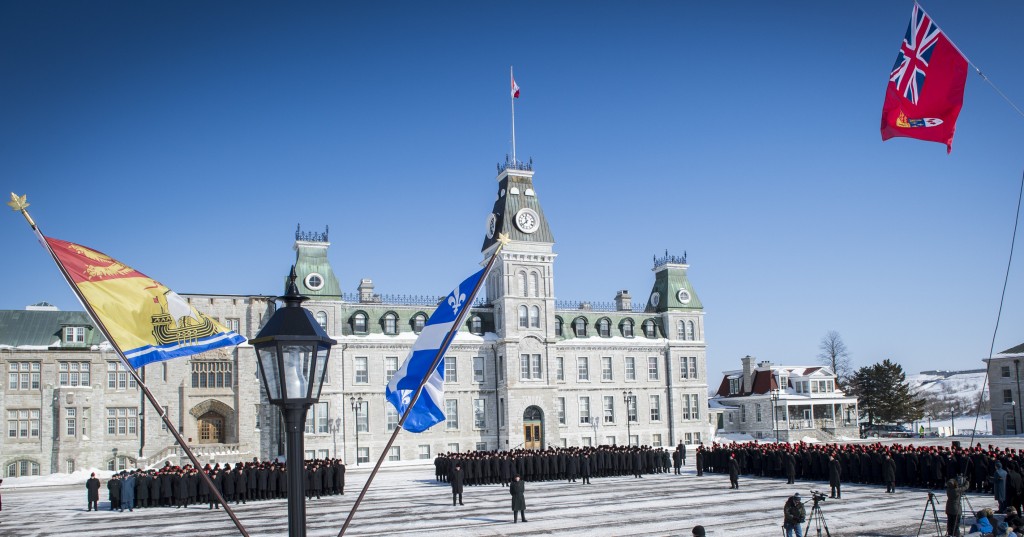 In addition to the maple leaf, the Canadian Flag is composed of two main colours: red and white. Red represents power, energy and blood. These three components together are to me, especially as a member of the Canadian armed forces, the rendering of the sacrifice of the men and women that fought to defend the democratic values and the freedom of our great nation. As for the white, it represents liberty and peace. Both are two very fundamental values not only in Canadian heritage, but also in my life. Our nation is open to multiculturalism, offers a safe haven for those oppressed in foreign countries and offers opportunities to its citizens to become the best that they can be.

When in an English speaking country, I am always proud to say that I’m Canadian, not American. Always be proud of where you come from.

This past Friday, the 13th of February, the entire cadet wing formed up and fell in on parade to celebrate the 50th anniversary of the selection of the current Canadian flag which symbolizes Canadian pride. After three speeches outlining the rich history of the selection of the Canadian flag, the cadets stood tall and saluted the Canadian flag as it was raised over the parade and flapped proudly in the wind. It was the perfect send off for the cadets leaving on reading week and a touching homage to the great Canadian maple leaf. 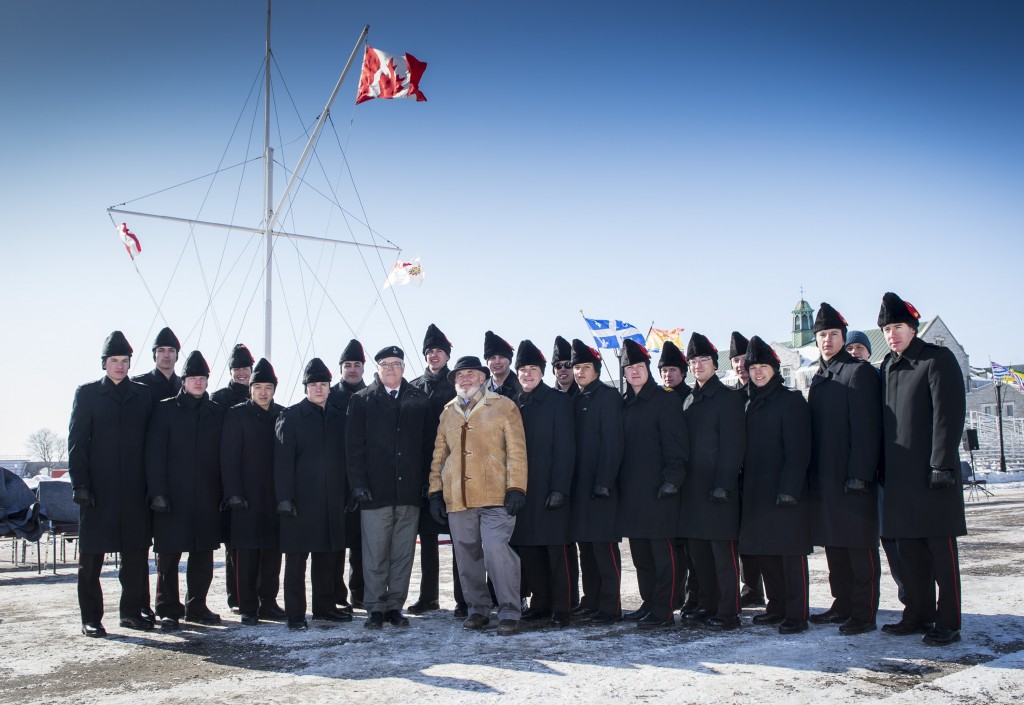 When I was asked to write about what the Canadian flag means to me, I had to stop and think for a few short moments. Our flag isn’t something that I think about every day, or that I’ll ever sit down and contemplate. The thought comes instead in flashes that have a surprising depth of emotion. I’ll see our Canadian flag when I travel and I’m far away from home, on a colleague’s shoulder, or flying high in the wind. I’ll get an uplifting feeling of interconnectedness, of belonging, and of pride. This proud flag is a symbol of my country, of its people, and our shared values and unity. When the flag is raised and “O Canada” is sung, my pride in Canada is strengthened and my resolve to uphold its values is hardened; and this resolve is echoed in my peers across the parade square.

As I stood on the parade square today, celebrating the 50th anniversary of the Canadian flag, I realized two things. The first is how much I love the sound of our flag blowing in the wind. I am not sure exactly why, but it makes me happy. Perhaps it is because for me it represents the sound of freedom. Coming from a war-torn country many years ago, to live in Canada is to live in a country of opportunities, where all humans are acknowledged as intrinsically valuable, and we are afforded rights and freedoms. The second thing I realized is that I love the Canadian flag. It is simple and modest, but to me it represents an understated strength and elegance, of a country I am proud to call my home.