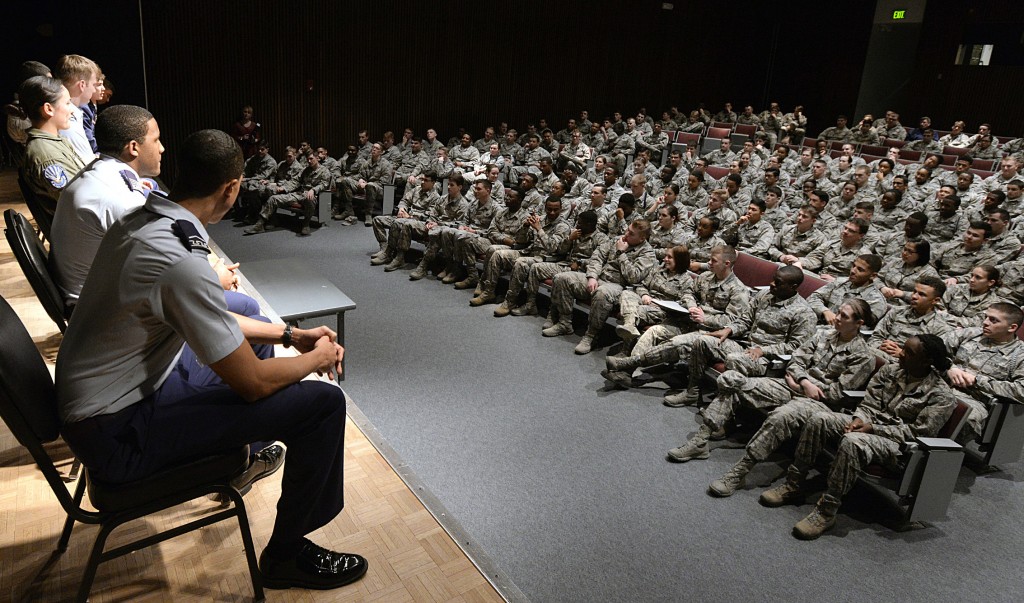 Seven former preppies, now cadets, spoke to over 200 cadet candidates, answering their questions and emphasizing how teamwork, hard work and the right attitude can get them through the Academy.

Cadet 1st Class Will Gustafson, who has served as an element leader and assistant course commander in Basic Cadet training here, said he wanted to be a part of the panel to encourage cadet candidates to always do the right thing.

“A lot of students who come to the Prep School are behind academically,” he said. “I hope the stress of Academy academics doesn’t overwhelm them and force them to make bad decisions. I’ve seen a lot of friends and fellow preppies face honor situations that for some, have gotten them kicked out. I didn’t have stellar credentials going into the Academy but with the right attitude and effort, anyone can get through it.”

“Discipline is about doing things you don’t want to do but know you’re supposed to do because it’s your duty,” he said. “At the Academy, you will be given certain orders. Some will be meaningful and others, not so much – but you need to follow all of them to set an example.”

Nicholson said devotion is about focusing on someone or something bigger than you, such as your faith, family or friends, when the going gets rough here.

“Find something outside of yourself that will make you push through when things are difficult at the Academy,” he said. “You’re going to have times here when you don’t see the light at the end of the tunnel. It’s a part of developing character – who you are and who you are going to be. The sum total of your life will be comprised of your choices. The choices you make at the Academy are who you are – not who people say you are. Be the person you want to be and give it your all because that’s what integrity is all about. It is what is going to make you a great officer.”

“If you want something bad enough, you’ll make it happen,” said Cadet 2nd Class Charlene Blair, Wings of Blue member. “I put school first. I finish my homework and then head to the airfield to complete trainings and duties. You can do anything you want here as long as you get your priorities straight and make time for it. It’s about time management.”

The quickest way for a cadet to get kicked out of the Academy is if their integrity is comprised, according to Cadet 1st Class Garrett O’Hanlon, Cadet Wing Honor Chairperson for Education here.

“You will get through academics if you seek help and surround yourself with encouraging people,” he said. “The work is doable if you work at it.”

“Charlene was able to visit Japan on a summer immersion trip and I was able to visit Istanbul,” he said. “I’m able to fly and visit different places about once a month because I can.  None of my friends at other schools get travel opportunities like that.”

Don’t let laziness be a factor to failure, Gustafson said.

“If you do the right thing, your professors will bend over backwards to help you,” he said. “I’ve received a lot of extra instruction. Although last semester was my hardest, it’s the highest GPA I’ve received here.”

The bonds cadet candidates make at the Prep School will last the next four years, Gustafson said.

“You see fellow preppies at the Academy and you rely on each other,” he said. “Garrett was my neighbor at the Prep School. The next year, during the morning of Basic Cadet Training, I saw him standing across the hall from me and my squadron. We ended up being roommates (during) freshman year and have remained good friends ever since.”