(Another in a series of articles coordinated by 26659 Danielle Andela – e-Veritas Sr. Correspondent) 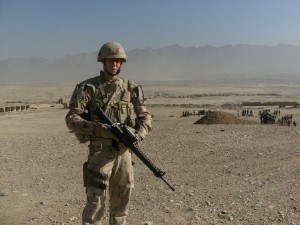 I enrolled in the Canadian Forces in 2005, as an RMC student and I completed my degree in Psychology in 2009. Later the same year, I completed artillery officer training and was posted to CFB Shilo.

I served the guns of the 1st Regiment Royal Canadian Horse Artillery (1 RCHA) since 2010. My first position at the regiment was as a Gun Troop Commander.

When C Battery, 1 RCHA re-roled as a Surveillance and Target Acquisition (STA) Battery, I volunteered to be one of the first officers at 1 RCHA to be trained in that stream. I was employed in the STA battery as a Sound Ranging Troop Commander, Radar Troop Commander, and as the Battery Captain (BK).

In 2011, I had the opportunity to participate in both Op LUSTRE, the military contribution to flood relief efforts in Manitoba, and Op ATTENTION, the NATO training mission in Afghanistan. While on Op ATTENTION, I was employed as a mentor with the Afghan National Army’s School of Artillery.

After my return to Canada, I was employed at 1 RCHA as a Forward Observation Officer, as well as Adjutant.  I held the position of Adjutant during Op LENTUS 1402, the military response to flooding on the Assiniboine river in Manitoba, in 2014, and was responsible for the coordination of administration across various elements of the task force. I have recently taken a position as Plans Officer in the Regiment’s Operations Cell, and am currently attending the Army Operations Course at the Canadian Army Command and Staff College at Fort Frontenac in Kingston.

What I remember fondly about the college:

The bonds that you form as you live in close proximity, go through the struggles of RMC and your trade training

together, and stir up trouble here and there, are not broken once you walk through the arch. They’ll endure throughout your lives.

The friends I made at RMC are people I will cherish as friends for the rest of my life. Every few months I seem to bump into someone that I haven’t seen in years, or even since graduation, and it always amazes me how, as we catch up, it feels like almost no time and space has passed between us.

A side benefit to this is that almost anywhere I go in Canada and even abroad, there always seems to be an old classmate nearby. They’re always game to join me for a pint and catch up, and willing to lend a hand if I ever need one.

My advice for graduating OCdts: 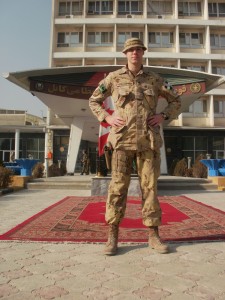 Never stop learning. It’s important that you take initiative to improve your skills. You need to study your job without being told to do so. That’s how you’ll become the person that your subordinates, peers, and even superiors see as an expert in your field.

Find balance. It can be easy at times to let your work life consume you. If you’re motivated to do well, you might be tempted to spend long hours at work trying to “get ahead”. Don’t fall into this trap. Take time to enjoy yourself, and spend time with family and friends.

Be fit. It doesn’t matter what your MOS is, being fit will serve you well.

Enjoy your work. This is the most important piece of advice I can give you. You’re about to begin an incredible, exciting, and important career, but there will be aspects of your job that you won’t enjoy, and times when you’ll be bored silly. The great thing about being a junior officer is that you’re expected to be full of piss and vinegar, and your CO will likely support that. So if there are things you enjoy that you can integrate into your job, do it. Do you enjoy rock climbing or rugby? Ask your chain of command for their support in forming a unit team. You’ll likely get it. Want to be a SOF operator, or work at an embassy? Make sure your chain of command know your career goals so they can help you get where you want to go. These things will keep you motivated on the dull days.