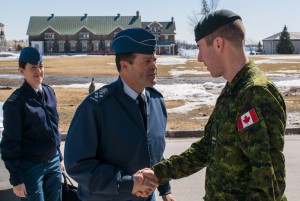 General Tom Lawson current Chief of Defence Staff (CDS) and a former RMCC commandant paid a surprise visit to the college – 1st April. A surprise for two reasons – April 1st is the birthday of the RCAF which one would assume would keep the former RCAF CF 18 fighter pilot busy with a whole lot of air force related formal & social events.

Second, the Class of 1979 graduate had (and still has) a reputation for enjoying and even participating in a well executed skylark. What is a better time than 1 April than at his old stomping grounds?

At any rate, the commandant, BGen Al Meinzinger was happy to greet “the boss”. A surprise for the Cadets,  the CDS, himself had lunch with some of the top cadets.

He attended the 4th Year Aeronautical and Mechanical Engineering Capstone Project Presentation which was held at Currie Hall. 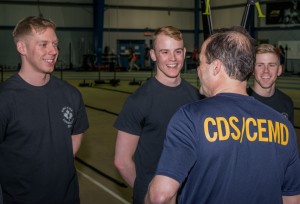 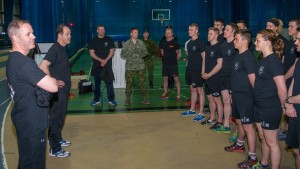 A big time supporter of the Sandhurst competition team since his time as the college commandant; he worked up a sweat by meeting and ‘training’ with the team.

The team is off to West Point later this week for the annual high profile international military skills competition.

The Class of 1964 is the the major sponsor for the Sandhurst as they have committed $16,700 this year to cover costs that are not available from public funds. The Class of ’64 funds are administered by the Foundation.

During the evening the soon to be retired CDS eventually took part as the guest speaker in a special RCAF 91st birthday celebration hosted by 1 Wing.

He stayed overnight as guest at the residence of the commandant.

Prior to departure on the 2nd – both BGen Meinzinger and the former varsity cross country runner were seen jogging in and around the peninsula including a sprint up Fort Henry Hill quite early in the morning.

Quite the experience for a whole lot cadets who had the opportunity to interact first-hand with the Chief of Defence Staff.