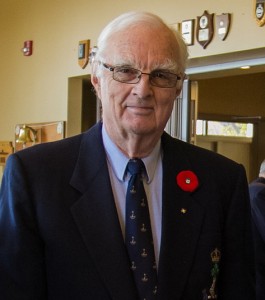 Former RMCC DCdt & DAdm, 5300 Bob Thomas (Class of RRMC RMC 1962) had a cycling accident while cycling with his family is Ottawa on 11 Oct. The doctors decided he should have the surgery in Kingston so he was tranferred to KGH on 14 Oct. His femur was badly broken so he has had a plate inserted and pinned to the pieces of the bone. This is the same leg that has the replacement hip, done last year. He was transferred to St Mary’s (in Kingston) on 21 Oct. We will provide updates when available.

Please mark your calendars: M0737 Major Andrew Belyea of the Department of English, winner of the 2015 Class of 1965 Teaching Excellence Award will be giving his public lecture at 19h00 on Monday, 16 November 2015 in Currie Hall. The title of the Talk is “Here Today, Gone Tomorrow Transhumanism, Ecocide, and the Zombie Apocalypse: Surviving the Age of Evolution” and will be given in English.

Chad Bush (son of 8100 Wil Bush RMC ’69) leads the Canada West in shutouts, wins, goals against and save percentage.

Another Impressive Class of ’65 …

Hi Bill & Rolande: I am mailing to you the newspaper Obituary for Bill Barry – I have not been well so am a bit late.

His high school years were in a small community – Carrot River , Saskatchewan – which is half way between Melfort and Tobin Lake .on the East side..

My wife’s family homesteaded about 20 km. from town on some beautiful land in the dirty 30’s. They built and had a one room school until 1956 then the kids were sent to “boarding” in town.for high school – so they all knew each other from the area. Thus all of her family knew Bill Barry and were anxious to trade stories this past weekend.’

During Centennial celebrations the Ladies Auxiliary had a large display of local history and that is where I found a picture of Bill in full RMC Dress Uniform plus a story about him.. Subsequently I met up with him at several Remembrance Day ceremonies – I was wearing my blazer so he recognized it., and I was fascinated with his books about Saskatchewan and the stories behind the scenes of geography and coming of trains and wartime training etc.,

We look forward to saying hello. Many thanks for your efforts in Everitas – the College news is always welcome – sincerely