After RMC and Queen’s, 4840 Dr. Peter Ashley (RMC, ’60, ‘B.Sc Chem Eng ) spent three years at Air Material Command Head Quarters before returning to Queen’s for his PhD in Chemistry. Following a career at the Alcan Research Center in Kingston he began a new career with Norton Company in Niagara Falls. Shortly after he joined Norton they were bought by the French Glass giant Saint Gobain. He then transferred to Huntsville, Alabama to continue product development work there but soon was moved to the Research Center in Worcester Mass. Less than a year he was back in Huntsville to head the Quality Program, the Chemistry lab and to participate in Process Engineering.

He retired in 2005 and has been in Huntsville ever since. In 2006 he took the Master Gardener Course and since then he has volunteered with the Gardener organization in both administrative and gardening roles. In addition to his own gardening activities he is a Board member, chairs the Workshop Committee, assists with the two Master Gardener classes each year and runs the Soil pH Testing program. He is also a Docent at the Huntsville Botanical Garden giving tours of the garden to many different groups. In addition, he drives the Garden shuttle in the Garden once a week over the spring, summer and fall months.

Other activities include assisting a friend on his Christmas tree farm, and belonging to a reading club reading books he would never have chosen on his own (good for the mind). He also belongs to the Huntsville Photographic Society and participates in their monthly competition. Yearly he participates in the Church Lobsterfest – Maine Lobsters cooked to perfection and he knows how! He also consults with refractory industries on an intermittent basis.

To be able to keep up with this he works out at the local Wellness center 4 times a week.

Since all the family are in the Kingston area, he and Robin visit twice a year to see them along with other relatives in the Toronto-Burlington region. They also try to take a VACATION trip once a year; last year was the Yorkshire Dales, and this year will be a Viking cruise on the Danube. In the past they have visited Australia, New Zealand, Jamaica, Scotland, Norway, Italy, and Paris as well as Nova Scotia, New Mexico, San Francisco and other North American Locales.

With the family in Canada they are planning to return within the next two years, and they would welcome advice on downsizing. 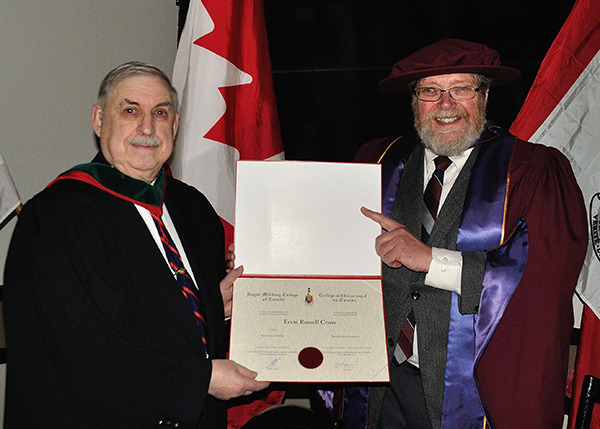 Better Late Than Never! – Comox resident 3895 Ervin Cross (Class of ’57) was presented with his Bachelor of Science degree from the Royal Military College of Canada (RMCC) in a ceremony in Courtenay on Monday, February 24.

He graduated from RMCC in 1957 in Chemical Engineering, two years before the college was empowered to grant degrees. In recognition of the full university program he completed, he was granted a degree retroactively at the RMCC Convocation in November 2013, but was unable to attend the ceremony in Kingston, Ontario.

As a representative of the Senate of RMCC, Dr. Joseph Buckley, Dean of Graduate Studies and Vice-Principal Research came to Comox for the presentations. He brought words of congratulation from Brigadier-General Al Meinzinger, Commandant of RMCC, and Dr. Harry Kowal, Principal of RMCC, and then gave Mr. Cross his degree and gifts from the Commandant and the Principal. Local members of the “Old Brigade” – RMCC alumni from classes at least fifty years ago were also in attendance to celebrate the event. Following the presentations, Mr. Cross addressed the audience of family and friends with words of reminiscence and thanks.

Reading Week From a Different Perspective 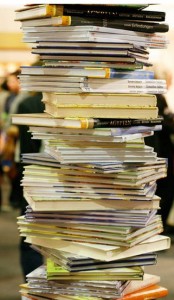 As a cadet who stayed on campus during Reading Week, I had the unique opportunity to see the College in a very different light than the usual hustle and bustle of a thousand cadets marching across campus to class, populating the mess hall and running amok in the corridors.

With most cadets either going down South or returning home for the week, the Cadet Wing shrank to less than 10% its usual size. The usually busy Cadet Dining Hall had very few tables occupied, it was for once possible to nap without being woken up by noisy first years and most campus services were either closed or reduced their hours. The usually vibrant community became quite peaceful and relaxing.

Last Sunday, when cadets started to return to campus, some of my fellow “Reading Week warriors” and I (although happy to see our friends again) lamented the loss of our quiet oasis. The last day of the break also brought the guilt of “I definitely should have done more reading” to even the most studious cadet.

The first week back was not at all forgiving, especially because some cadets enjoyed themselves so much over their week off than they needed a vacation to recover from their vacation, yet returned to midterm week – a week of cramming, essay writing and thoughts of “20% really isn’t that much…..).

Luckily, Personal Military Training was cancelled this week to provide a much-needed academic morning for cadets to study, consult their teachers or catch up on some much-needed sleep.

With the arrival of March, suddenly the end of the semester does not seem that far away, making these next 8 weeks a final push for the class of 2014 before their graduation and commissioning in May.