At 92 years of age, Herb Pragnell died peacefully at the Almonte General Hospital on Thursday, May 22, 2014 after a short illness. Herb was born and raised in Portage la Prairie, Manitoba as one of four boys of the late Alice and Walter Pragnell. He was a loving husband to Helen (64 years) and proud father of Ian (Nancy), Scott (Eileen), David (Heather) and Richard (Charlotte). Beloved Gramps to seven grandchildren and one great granddaughter. He will be greatly missed by the family and Donata, his caregiver and friend. A member of the Wartime RMC class of 1940-1942, Herb served overseas with the Royal Canadian Engineers in England, and then with the Princess Patricia’s Canadian Light Infantry (PPCLI) in Italy and during the liberation of Holland. Post-war, Herb completed his Civil Engineering degree at McGill University and spent most of his career with the Defense Research Board in Ottawa. He and his family moved to Almonte in 1959 and put down strong roots. Herb enjoyed singing in the Almonte United Church Choir and worked tirelessly for his community in the Lion’s Club, Almonte Legion, town and county councils as well as many volunteer groups. As an amateur historian, Herb was also a founding member of the Mississippi Valley Textile Museum. He will be remembered as an avid golfer and life member of the Mississippi Golf Club. He played his last game at 89 but continued to coach until the end. Donations to the Mississippi Valley Textile Museum or the R. Tait McKenzie Scholarship Fund. God Bless.

On Monday, May 26, 2014 from 2 to 4pm and 7 to 9pm. A Legion Service will be on Monday at 6:45pm with a Lion’s Club Ceremony to follow. Funeral Service to be held at the Almonte United Church on Tuesday, May 27, 2014 at 10am. Reception to follow in Church Hall. Private Family interment at Auld Kirk Cemetery. 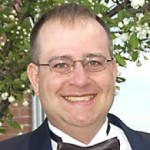 LIEUTENANT RIEL BISSON After a courageous co-existence with Acute Myeloid Leukemia, Riel, aged 34, passed away peacefully on Sunday, May 25, 2014 at the Health Sciences Centre. Riel is survived by his loving spouse of 11 years, Bianca Gagné of Metabetchouan-Lac St-Jean; parents Ronald Bisson (Claudette) of Ottawa, Gayle Johnson of Brandon, and his extended family to include Michel, Julie, Riley, Layton, Jill, Logan, Taylor, Dyron, Ursula, Tyler, Cara, Kurt, Sean, Stephanie, Eva, Louis, Marc, Isabelle, Yannick and Kevin. Riel was adored by Bianca’s family which includes her mother Linda (Michel), Denise, Pauline, Richard (Claudette), Daniel, and especially her grandmother Florina Miron, all from Quebec. Born in Winnipeg on September 19, 1979, Riel’s life journey led him to many different parts of Canada which began with his enrolment into the Canadian Armed Forces in 2001. It was on his first posting to Bagotville QC, where he met the love of his life, Bianca. After graduating from the Royal Military College of Canada, with a Bachelor of Engineering (Aerospace Engineering), Riel was posted to 1 Canadian Air Division/Canadian NORAD Region Headquarters in Winnipeg. Services were held in St. Marguerite Bourgeoys Roman Catholic Church, 2235 Silver Avenue at Whytewold Road, on Thursday, May 29, 2014, Rev. Fr. Léo Couture presided.

The family wants to express their gratitude to the staff and volunteers at CancerCare Manitoba and GD6 Ward at the Health Sciences Centre. Riel was very appreciative of the world class care he received during his nine month illness from the Manitoba Health Care system.

The family would also like to thank the Canadian Armed Forces for their ongoing support and caring for Riel and Bianca throughout this challenging period. In lieu of flowers, donations in Riel’s name can be made to the GD6 “Leukemia Care Ward” Patient Comfort Trust Fund, c/o Health Sciences Centre Foundation, 820 Sherbrook Street, Winnipeg, MB R3A 1R9. Wojcik’s Winnipeg Funeral Chapel & Crematorium, 2157 Portage Ave., 204-897-4665, is in care of arrangements. wojciksfuneralchapel.com 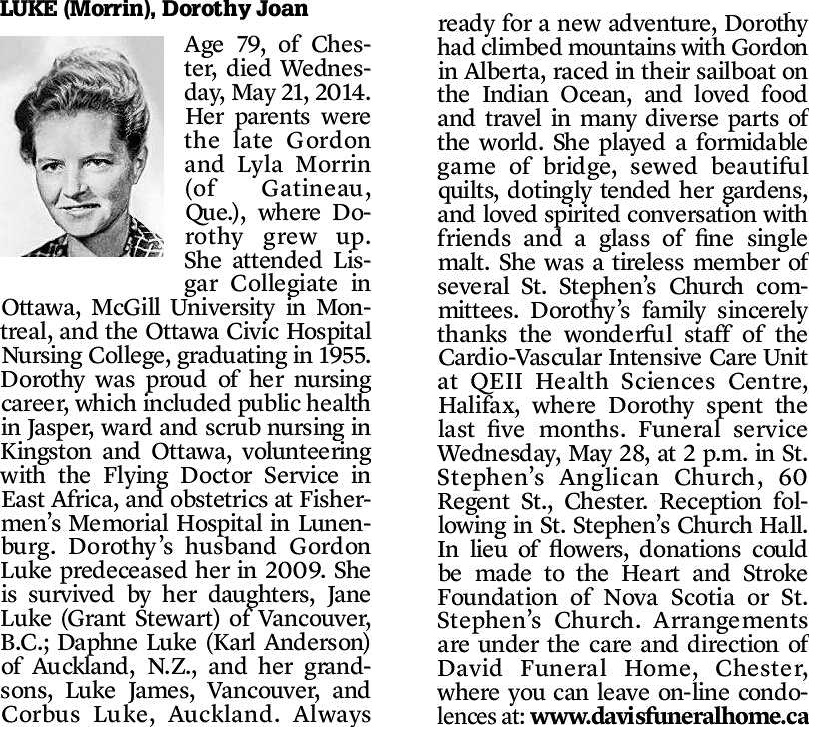 Neil John Carscadden passed away suddenly on Monday, May 26, 2014. He will be sadly missed by his wife Diane, children Christina (Fred) and Scott, and treasured grandsons Fredrik and William Eaton. He is also survived by his mother-in- law Kay Chown, of Brantford, and siblings Barbara (Les), Gary (the late Margie), Keith (Margaret) and Lorne (Mary).

Born in Manitoba in 1942, Neil was educated at Royal Military College and Ohio State University (MSc). After graduating from RMC, he served as a Captain in the Canadian Air Force at Wright Patterson Air Force base in Ohio during the Vietnam War. Neil started his business career in computer software at IBM. He became a partner of DMR Consulting, and eventually founded his own software consulting company, working on major software projects for the Canadian banks, and other institutions around the world. His modesty, drive anddiscipline set a positive example for everyone around him.

An avid sportsman, he enjoyed hiking, biking, sailing and skiing until the end. An active billiard player, he will be missed by his friends from the billiard club. He was an early member at the Georgian Peaks Club, a former member of the Royal Canadian Military Institute, and an active member of Rotary Club in Thornbury. Neil’s pride and joy, above all, were his grandsons Fredrik and William. He spent many happy days with them, playing at the park, skiing, listening to music, and building LEGO.

Cremation has taken place and a memorial funeral service celebrating Neil’s life was conducted at St. George’s Anglican Church, 166 Russell Street in Clarksburg, on Saturday, May 31, 2014.

A private family disposition of Neil’s ashes will take place at a later date.
www.fergusonfuneralhomes.ca

Peter was born to Gilbert and Maura Chisholm in London, Ontario on September 28, 1929.  He received a B.S. in Engineering from the Royal Military College, a Masters from the University of Toronto and attended Stanford for his Doctorate. Peter married Grace Barry of Stouffville in 1957, settling first in Toronto and later in Guelph, and were very happily married for almost 57 years.

Peter was a Professor of Engineering at the University of Guelph. Known by his students as ‘smiling Pete’ he was passionate about making a difference in his students lives He was active with the local chapter of the APEO and Engineers in the Classroom where he brought his joy of teaching and science to classrooms throughout southwestern Ontario. An avid outdoorsman and nature lover, he caught many trout that got bigger with every story told.

Peter is survived by his wife Grace; his children Scott and Karin (nee Kaarsoo), of Calgary, Meaghan, of Tappan, New York, and Ted, of Oakville. He is also survived by seven grandchildren who loved him dearly.

A visitation will be held at Wall Custance Funeral Home, 206 Norfolk St., Guelph, from 2-4 pm and 7-9 pm on Thursday, June 5th. A funeral service will be held at 4:30 pm on Friday, June 6th at St. James Anglican Church, 86 Glasgow St. North, Guelph. A reception will follow at the reception centre at the Arboretum at the University of Guelph.