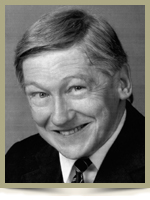 Dr. John Michael Gilliland died at home in Victoria on Wednesday, May 5th, 2010. Born on April 13th, 1939 in Victoria. He is predeceased by his first wife Margaret and survived by his second wife Corinna. Archivist, scholar, lecturer, actor, magician and clown – all were facets of John. He studied at Vic College, UBC, Cambridge University and Memorial University in Newfoundland where he received his PhD. He returned to the west coast and eventually to Victoria in the mid 1970’s. He taught physics at Royal Roads Military College.

A celebration of John’s life was held at Langham Court Theatre on Saturday, May 15th.

17482 Kristian Maris (RRMC 1991) writes “I first met John when I was a student at Royal Roads Military College and he taught me Physics. A few years later I had the privilege of acting alongside John in Arcadia (1996, I think). I really respected his love for Langham Court. I recall my own silly pride in being able to tell John that I was leaving Victoria to study at Cambridge. And I think this pleased him. But I mentioned it in the middle of a conversation about nuclear fission, or fusion, or that collider in Texas. I think he was more thrilled to unpack for me all the science of the collider than tell me about Cambridge.” http://www.mccallbros.com/john-michael-gilliland/