After a career outside of politics 8475 Rem Westland had an opportunity to run for the Conservative Party of Canada in the 2011 federal election. In his book – Running for the People – he likens the experience to running the recruit obstacle course at RMC.

While his eye is focused upon the structures and machinations of the Party he represented, the book is a critique of democracy from the perspective of a novice candidate.

Running for the People?: How Canadian Elections Favour the Career Politician –

e-Veritas: How did you end up at RMC?

8475 Rem Westland (RMC 1970): My family immigrated to Quebec City from the Netherlands in 1954. Growing up, I was involved in the cadets at high school and then the militia. A dutiful son, I went to military college and then joined the Canadian Forces because that is what my father and a favoured uncle had done, in the Netherlands. At the time I was not sure I wanted it for myself, but I am now very proud of my RMC (Royal Military College) background.

8475 Rem Westland (RMC 1970): I studied political science at Royal Military College. I served four years as a logistics officer in the Forces and then left to study political science at graduate school at Carleton University. This was followed by a stint as executive assistant with a minister in the Trudeau government, and then twenty two years in the federal public service. My public service career included time with the departments of Aboriginal Affairs, Privy Council, and then eight years as a civilian back with National Defence responsible for real property. Those last eight years were easily the most enjoyable. When I left the public service I became associate vice-president with the Corporate Research Group where my division was responsible for projects involving both Aboriginal and real property issues . There is a tremendous overlap in those issues because Aboriginal claims typically challenge historical and contemporary federal and provincial actions regarding land and other resources.

e-Veritas: Was running for parliament on your bucket list for things to do?

8475 Rem Westland (RMC 1970): It was always at the back of my mind, but my work after leaving the minister’s office required me to be a-political and, besides, my political affiliation changed! When the chance came to represent the Conservative Party of Canada I could not turn it down. Running for Parliament required me to put aside my income as a senior consultant and to add my 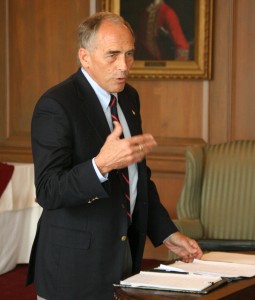 own funding to the cost of an eventual campaign. It was an expensive venture. I believed, however, that I should do my part to try and restore vibrancy to democracy in Ottawa-Vanier. I had deep personal and professional roots in the riding, I was able to speak knowledgeably about issues both national and local . The campaign went well, but in the end I came third, pulling 27 per cent of the vote — about what Conservatives usually get in a riding that’s voted Liberal forever.

e-Veritas: You kept a diary from nomination to after election day and recently had a book published.

8475 Rem Westland (RMC 1970): I wrote “Running for the People?: How Canadian Elections Favour the Career Politician”, which was published on April 15, 2015 . The book draws from an overview of my experience and my diary (www.runningforparliament.com) . I wanted to keep a record of my nineteen months as a candidate because I suspected I might have something useful to say about the experience. In the book I describe the weakness of electoral district associations, the presumptions of party headquarters, the intricacies of campaign financing, and contemporary data-based systems that depersonalize politics at ground level. I am candid about how running for Parliament can damage professional and personal relationships. I pose questions about the future of democracy given how tough it is to step up to the plate – and stay there – if you are not a career politician or aiming to be one. I argue that the electoral process is akin to a gauntlet of tests. Running the gauntlet is especially hard for novice candidates who have had a successful career outside of politics. Career politicians, I argue, have a tremendous advantage but they do not run for the people. Career politicians run for the political party they represent. When the chips are down they have trained themselves to do what the party wants them to do and that could be dangerous one day . I crack open an aspect of the political system that relatively few experience and that even fewer ever speak or write honestly about.

e-Veritas: As a father of 5 children, did you pick up any insights about politics and family life?

8475 Rem Westland (RMC 1970): In my book I highlight seven tests in the gauntlet of tests. At least two of them (the tests of commitment and of isolation) require a budding or serving politician to engage family and friends. In my case the personal costs were high. I believe this is true because running for public office takes a person from his or her private space and moves that person into a public one. After even a short while in the public space the time to deal with private matters falls away. Being a mother or father often requires a person, especially as children mature, to give undivided attention to the challenges they face. I say in the book that I am not sure being a good parent and being a good politician are compatible. In my case I lost the election and I could patch up damage in my private life after only a few months away. I was lucky.

e-Veritas: In your book you compare running for public office to the recruit obstacle course at RMC.

8475 Rem Westland (RMC 1970): There are many cultures and many lines of engagement in which aspirants for membership must undergo tests to prove their mettle. I observe in my book that the tests in the recruit obstacle course are physical and those confronting aspirants for public office are metaphysical (tests of privacy, values, endurance, and others), but both can exhaust a person and can sometimes hurt. What makes running for public office so hard for novices is that the people imposing the tests are spouses and partners, immediate family and relatives, neighbours, electoral district association executive and members, political party representatives, and the residents in the candidate’s riding. Whereas the seniors who line the obstacle course want each and every recruit to succeed, in the run for public office sometimes even those closest to you want you to lose. Most of my extended family are staunchly Liberal, for example. 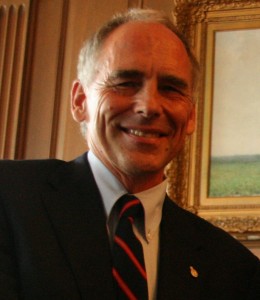 e-Veritas: It appears from what you say that your time at military college has been important through much of your life.

8475 Rem Westland (RMC 1970): Absolutely. For me my opportunity to contribute to Canada’s military when I joined National Defence as a civilian felt like a homecoming. I have a deep admiration for what young people who join the military today and especially RMC are knowingly taking on. We graduates of the college owe those who are still there the very best examples we can be. Throughout my working life I have regularly asked myself if my conduct was becoming for that of a military college cadet. In some ways I have never entirely left the place.

e-Veritas: I cannot let you go without asking your views about the Aboriginal Leadership Opportunity Year. You have an extensive background in Aboriginal issues and claims.

8475 Rem Westland (RMC 1970): That’s a tough one. I was closely involved in the evolution of Aboriginal relations for over twenty years. I have been a contributing part of some astounding successes, such as the 2004 settlement of Quebec Cree claims that delivered structural changes, policy changes, and a federal payment of over $1 billion. Yet, overall, the socio-economic indicators for life among people of Aboriginal descent have not improved. Opportunities such as that offered by RMC are very important. The key is to always ask graduates of the course if they got from it what they hoped and, if not, to then make the adjustments that graduates are asking for. It is also extremely important to maintain regular, ongoing, lifetime contact with each and every graduate. Too often we non-Aboriginals reach out from our positions of authority or friendship to exchange gifts, share experiences, shake hands, and then we walk away. The problem with treaties in Canada, for example, is that governments and citizens forgot about them shortly after they were signed. Aboriginal leaders ask that treaties between us not be forgotten. Parents ask us to remember their children.