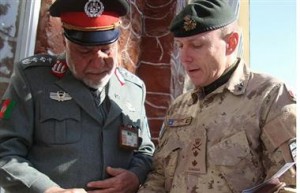 “The ANP is still a very fragile institution and it carries the highest consequence of failure,” Ward said during a visit to the Afghan Police Academy in Kabul. “That is why there is an emerging recognition that we must focus our effort on the police.”

“There’s much more to be done but we have over 1,400 soldiers, sailors and airmen on the ground here in Haiti and we’re working together jointly, working very well to make a difference as one taskforce to save lives and mitigate human suffering,”

“We’ve been the lucky ones who have been able to complete the delivery,”

With the addition of the 71st Cavalry, Menard will oversee almost 6,000 troops. Menard’s “super brigade,” as Maj.-Gen. Marc Lessard, who commands all Canadian Forces overseas called it several months ago, also includes about 2,850 Canadian troops.

Was it a missile, or a hoax?

Dr. Allan called it “a subsonic something or other,” that may well be a hoax.

Military wants to know why torture report was hidden