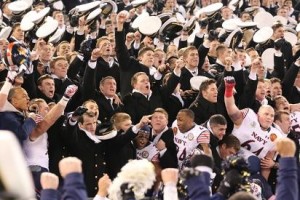 By: WJO with some help from the Class of ’87 FB page 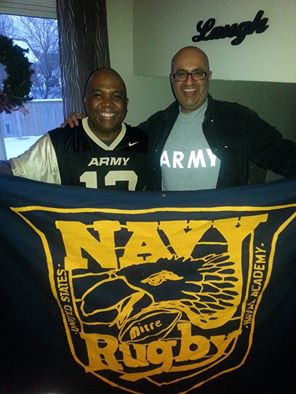 Back in the Spring of 1987, the RMC Redmen XV paid a visit to the United Sates Naval Academy to play a friendly rugby match.

As was the custom in those days following rugby matches; a great deal of partying took place.

In the course of the post-game frolicking – two cadets from RMC thought it would be a good skylark to liberate an elaborate banner from the Navy Rugby Club House.

All in good fun, of course.

After several failed attempts to ransom it back to the USNA, it was finally packed away by one of the culprits – always with the intention of returning it – ransom or no ransom.

16115 DS (Pal) Mann – Class of ’87 (photo, right with glasses) who happened to be a part of the rugby trip 27 years ago returns to watch the classic football game. His partner in crime that day 16110 Rod MacIntosh could only wish that he was there too.

What a great opportunity to return the banner.

27 years later, like a long lost relic unearthed by Indiana Jones, Pal handed it over to his compadre in the hope that it will finally make its way back to the Mothership after almost 3 decades.

Rod was still interested, “What was the final ransom?” Not an unexpected reply, “Not sure what will come from it. …. my man Butch will negotiate it out on his next visit! I’m imagining it might be Navy bling and something beer-ish!”

For those interested in the result of the 115th Army-Navy Football Game – 17 – 10 Navy for their 13th consecutive victory.