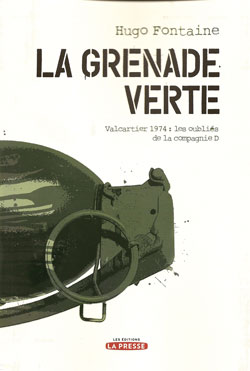 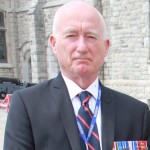 military history. On 30 July 1974, during a routine lesson on explosive and pyrotechnic safety, an M-61 grenade exploded in an improvised classroom crammed with over a hundred teen-age boys at the Valcartier Summer Cadet Camp. When the smoke cleared, six youngsters lay dead or dying; over 50 boys had been wounded, many seriously.

The author, Hugo Fontaine, is a well-known business reporter with Montreal’s La Presse.  He is a skilled writer, with a flair for painstaking research, and an obvious passion for military history. He has written a praiseworthy work of narration and analysis, based upon rigorous primary source research, including interviews with survivors, military police reports, the board of inquiry, and the coroner’s report. The author takes us back nearly 40 years to investigate that long-forgotten moment. His purpose is two-fold: to recount in frightening detail how and why a deadly powerful live grenade made its way into box of dummy explosive devices which was passed around in a crowded room filled with adolescents naively unaware of the imminent danger. More to the point, Fontaine shows us how the explosion changed forever the lives its victims. For many survivors, their wounds remain physically and mentally debilitating. In this, his first book, Fontaine’s agenda is refreshingly unblemished by ulterior motive.

In his research, Fontaine’s draws tough conclusions. First, it is clear that there was “a climate of negligence and carelessness” in the handling of explosives in Valcartier at the time.  His description tells us how officers and NCOs responsible for the safe handling and detailed accounting of explosives failed the moral test of leadership. Had the men in the chain of responsibility applied the regulations and procedures in place at the time, this grenade would have exploded harmlessly on one of Valcartier’s ranges. During its journey from the base ammunition depot, via a grenade range, and finally, into the crowded classroom, there is a trail of shocking disregard for safety. Fontaine’s second conclusion is that the victims did not receive the follow-up support or care to which they had a right. In contemporary interviews, many survivors tell a story of neglect – being sent home after camp with no follow-up. Months and years later, victims continue to suffer.

The last and best conclusion is that despite the horror of the moment there was valour as well. For the survivors, there is a hero in this tragic tale. His name is Charles Gutta. As the NCO responsible for the cadets in that classroom, he was one of first on the scene, directing first aid and evacuation. In the days and weeks that followed, he dedicated himself to the welfare of each victim. Decades later, he is still seeing to his flock, keeping track of survivors, and continuing the fight for compensation.

This is a great book artfully written and thoroughly researched – a splendid example of good military history.

Major (ret) Michael Boire, CD, MA, a former Armoured Corps officer, is an academic counsellor and PhD candidate at the Royal Military College of Canada, and is the Editorial Advisor of the Canadian Military Journal.