Bill & Brenda Truelove are ‘arms up’ in celebration for the Class of 2011!!

Commandant and ‘College Mom’ Message to Class of 2011

Well, while the weather may not seem that way, we’re at five days and counting until the Class of 2011, an exceptional group of young leaders, will receive their degrees and commissions, and march off the parade square and through the Arch for the last time as ‘Cadets’. While each of the graduates has had his/her own unique challenges and accomplishments over the four years, collectively; the incredible success of this class has been shaped by the many dedicated members of the RMCC team along with the families of each of the graduates. We want to thank the entire staff and faculty for their great support and commitment to the Cadets and the College. You have each played an important role in preparing these CF leaders to succeed in their challenging careers through the outstanding training and education that you have provided them over their time at the College. To the families of the graduates, thank you for your trust and confidence in the College and the Canadian Forces. As the Class of 2011 marches off the square on Friday, be proud of your important contributions and know that they will be forever appreciative of all that you did for them!

We wish to acknowledge and thank the RMC Club of Canada and the RMCC Foundation for their ongoing strong commitment and generosity to the College. The growing involvement of the Alumni in supporting all the activities of the Cadets, while also ensuring that the College history and traditions of the past are captured for the future, is greatly appreciated. We also cannot overstate the importance of the ‘Margin of Excellence’ opportunities provided to the Cadets by the Foundation. Ranging across all components of the College program, the Foundation has directly contributed to the success of the Class of 2011. We encourage all Alumni, both individually and as Classes, to continue to reflect on how you can enable the success of future classes through your support to the Club and Foundation.

Finally to the Class of 2011, we are very proud of all of you!! You are ready to transition to your new units and to lead with distinction. Be confident in your abilities, humble in your actions, and proud of your accomplishments. This week we will celebrate your success confident that you will carry with you the College motto of “Truth, Duty, Valour” throughout your careers. We wish you continued success and thank each of you for your commitment to the College and your dedication to serving your country.

It has been an honour and privilege to have been your Commandant and ‘College Mom’ !

During the week of 28 March, the Colombian Military Academy “General José Maria Cordova” in Bogota, hosted the 3rd International Symposium on the Development of Military Academies (ISoDoMA). ISoDoMA is an initiative of the Korean Military Academy bringing together military academies from around the world to discuss common interests in formation processes, education and training. The theme of this year’s symposium surrounded the Challenges for Military Academies in the Training of 21st Century Officers. Representing the college at this international event were the Commandant Cmdre Truelove, Director of Cadets LCol Wigg, and myself (photo left). Attended by 20 other nations, it was a tremendous venue to showcase the Royal Military College of Canada as we were invited to present our views of the process of competency-based training in military academies. 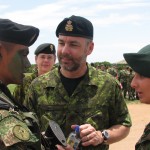 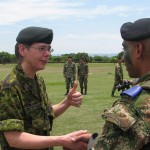 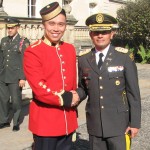 The Commandant had the honour of being the first panel speaker of the symposium, emphasizing the value of integrating our four component qualifications with the unit experience gained through Cadet Wing operations and training. Cmdre Truelove demonstrated how RMCC’s tried and true methodology follows true competency-based training that instills the necessary “know-how” and experience to ensure graduates step off the parade square duty ready.

The exchange of ideas with the other nations at all levels has confirmed we are on the right track. It was interesting to discover that despite the differences between the 21 participating countries, the approach to officer development at military academies is more similar than one might think. In fact, in discussing the status of competency-based training with each of the delegations, it became evident that each institution was following the same path, only at different stages of the development process. It is recognized that allowing cadets to exercise leadership within the boundaries of a training institution is a crucial step in their development. It is not enough to simply teach skills and challenge the mind. Leadership must be practiced in order to develop the competencies required of a future officer.

On the RMCC peninsula, we are able to practice the fundamentals of leadership by being empowered to lead the cadet wing, gaining experience in essential unit tasks and processes. Supported by a staff of mentors and coaches, mistakes can be made without significant career implications in a safe training environment. This is the value added for graduates of the RMCC who arrive at units practiced and ready to lead, equipped with experience and lessons learned over four years at the college.

As we prepare to bid farewell to the graduating class of 2011, the class of 2012 is taking their place as the new leadership of the RMCC. They, like many others before will be challenged to use all the “know how” they have gathered over the first three years to lead the wing. Their counterparts at academies around the world will also be following a similar path validating the competency-based training model that we, in Canada, have relied upon for over 100 years.

To the class of 2012 and beyond, embrace the opportunity to exercise and develop your leadership capabilities to the fullest extent. Recognize that the responsibilities entrusted to the cadet leadership at RMCC are far greater than many other military academies and represent a unique opportunity for officer development. I challenge you to develop the RMCC cadet wing unit identity through professionalism and discipline and to ensure that the members of this institution continue to exemplify the qualities expected of future leaders in the Canadian Forces. I look forward to following your successes with great anticipation.