Club Elects its first Board of Directors!

The Club achieved another major and indeed historic milestone in the implementation of the recently approved new Club governance model. Arguably the most significant recommendation emanating from the Strategic Review, the governance review and modernization has preoccupied the Club for the last two years. During this period, the Club completed an in-depth governance review which culminated in the approval of the new governance model and a significant revision to the Club’s venerable constitution which has served the Club very well since 1884. The on-line voting saw almost a 1,000 votes cast with an overwhelming 97% endorsement of the new model on 17 December 2014.

On Thursday, 26 March 2015, the Club held a Special General Meeting which was focused on the election of the nine directors. As this is a transition step of sorts, the terms for all nine members will expire with the election of a new slate during the 26 September 2015 AGM. As AGMs are the vested election authority for Board Directors, the new slate will be elected with varying terms of one to three years so that there will be future continuity.

In the opinion of many, the restructure of the Club’s governance model is the most significant in the history of the Club to date. Without doubt, the new Board of Directors will serve to enable the Club‘s governance to be harmonious with the best practices of Not-for-Profit organizations.

As a result of the Special General Meeting, the Club now has a Board of Directors comprising 14 Directors. Five of these directors are standing members of the Board and as such they are appointed or selected by other means. Of the remaining nine directors which must be elected, five of them represent classes from various decades while the other four Directors are members at large. 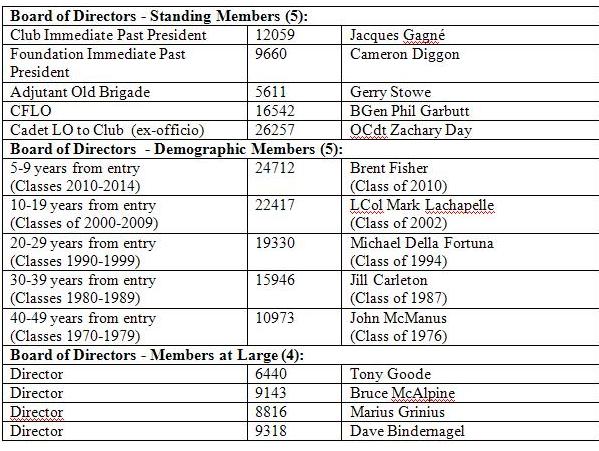 During the meeting, it was noted that the Board will elect its own President, Vice President, and Treasurer and that these three, along with the Club’s Past President, will also serve as the Club’s new Executive Committee. The term for Presidents will be two years with an option for a one year extension. This is specifically designed to provide greater stability as Board Presidents previously served one year terms. The first Board meeting will be convened in early April following which the Club President, Vice President and Treasurer will be formally announced.

On behalf of all Club members, I would like to convey our profound and most sincere appreciation to the retiring Executive Committee members; Glenn Allen, Bernie Laliberté, Michel Reid, and Tony Battista. Finally, we also owe a tremendous debt of gratitude to the architects of the Strategic Review and to the highly experienced and dedicated volunteers of the Governance Committee which spearheaded the significant restructure and refined the new Board Policies and Procedures document.