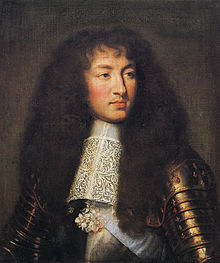 “There is little that can withstand the man who can conquer himself.”

“First feelings are always the most natural.”

“Every time I create an appointment, I create a hundred malcontents and one ingrate.”

Louis XIV was born on September 5, 1638, in Saint-Germaine-en-Laye, France, and christened Louis-Dieudonné—French for “Gift of God.” His mother was the Hapsburg Spanish queen Anne of Austria, and his father was Louis XIII, king of France. Louis XIV had a brother named Philippe, who was two years younger.

On May 14, 1643, when Louis XIV was just 4 and a half years old, his father passed away. Not much more than a toddler, Louis XIV succeeded his father to the throne, becoming the leader of 19 million French subjects and a highly unstable government. Over the course of his childhood, Louis XIV was primed as a leader, receiving a practical education rather than a scholarly one. Louis XIV’s godfather, Italian-born Chief Minister Cardinal Jules Mazarin, was responsible for tutoring the boy in history, politics and the arts. Louis XIV’s governor, Nicolas de Neufville, was appointed to keep watch over the lad, but incidents like young Louis XIV’s near drowning indicate that the monarch was overlooked as a child, if not as a ruler in the making.

In 1648, when Louis XIV was still shy of 10 years old, the Parlement of Paris rebelled against his chief minister, Mazarin. In an attempt to overthrow the crown, they waged a civil war, called the Fronde, against its supporters. Throughout the long war, Louis XIV suffered many hardships, including poverty and starvation. To Louis XIV’s relief, Mazarin finally achieved victory over the rebels in 1653. After the civil war ended, Mazarin began to build an elaborate administration as Louis XIV stood by and observed his mentor. By then, Louis XIV had come of age, but he was still afraid to question Mazarin’s authority.

A few years later, Louis XIV fell in love with Marie Mancini, Mazarin’s niece. Ultimately choosing duty over love, in 1660 he married the daughter of the king of Spain, Marie-Thérèse of Austria, instead. The marriage ensured ratification of the peace treaty that Mazarin had sought to establish with Hapsburg Spain.

Although Louis XIV’s mother, Anne, had become his regent when he took the throne as a child, Chief Minister Cardinal Jules Mazarin held the true power throughout Louis XIV’s early reign. It wasn’t until Mazarin died in 1661, when Louis XIV was in his 20s, that the young king finally took control of the French government. Upon assuming full responsibility for the kingdom, Louis XIV quickly set about reforming France according to his own vision.

His first goal as absolute monarch was to centralize and rein in control of France. With the help of his finance minister, Jean-Baptiste Colbert, Louis XIV established reforms that cut France’s deficit and promoted industrial growth. During his reign, Louis XIV managed to improve France’s disorganized system of taxation and limit formerly haphazard borrowing practices. He also conveniently declared members of nobility exempt from paying taxes, causing them to become even more fiscally dependent on the crown.

In implementing administrative reforms toward a more orderly and stable French government, Louis XIV forced provincial nobles to relinquish their former political influence. In so doing, he constructed a more centralized administration with the bourgeoisie, or middle class, as its foundation.

Along with his changes to the government, Louis XIV created a number of programs and institutes to infuse more of the arts into French culture. In this vein, the Academy of Inscriptions and Belle-Lettres was founded in 1663, followed by the Royal Academy of Music in 1666. Louis XIV also had Colbert oversee the construction of the Paris Observatory from 1667 to 1672.

Louis XIV is notorious for his overbearing approach to foreign policy. In 1667, he launched the invasion of the Spanish Netherlands, deeming it his wife’s rightful inheritance. The War of Devolution, as the conflict was named, lasted a year and ended when the French surrendered and gave the land back to Spain. France’s only conquest was to occupy a few towns in Flanders.

Dissatisfied with the outcome, Louis XIV engaged his country in the Franco-Dutch War from 1672 to 1678, during which France managed to acquire more land in Flanders and the Franche-Compté. The victory promoted France to the status of a dominant power. This status, coupled with Louis XIV’s campaigns to continually expand territorial claims through the use of military force, positioned France as a threat to other European nations.

Near the end of the 1680s, those nations, including Spain, England and the Holy Roman Empire, responded by banding together to form the Grand Alliance. A war between France and the Grand Alliance broke out in 1688 and waged on for nearly a decade, leading to its becoming known as the Nine Years’ War.

By the 1680s, Louis XIV had begun to generate public hostility, due, in part, to his efforts to establish religious uniformity throughout France. The king was a devout Catholic, and his persecution of the Huguenots came to a head with his 1685 revocation of the Edict of Nantes, which had formerly granted the Huguenots rights as a religious majority. Under the Edict of Fontainebleau, Louis XIV orchestrated the destruction of Protestant churches and schools throughout France and forced all children to be educated and baptized as Catholics. The revocation and the new edict served to alienate Protestants, prompting many to leave France and seek religious freedom elsewhere.

After the war against the Grand Alliance, France still held most of its original territory, but the country’s resources were significantly drained. The War of the Spanish Succession, from 1701 to 1714, further hastened Louis XIV’s decline as a leader. In this conflict, Louis XIV appeared to many of his subjects to place his personal interests above his country’s, as his goal was to defend the right of his grandson, Philip V, to inherit the Spanish Empire. The long war was so costly for France that it prompted famine and placed the country deep in debt. The public went from hailing Louis XIV as a hero to blaming him for France’s financial devastation.

On September 1, 1715, a few days before what would have been his 77th birthday, Louis XIV died of gangrene in Versailles, France. Following Louis XIV’s death, his 5-year-old great-grandson, Louis XV, who was the last male heir of the Duc de Bourgogne, inherited the throne.