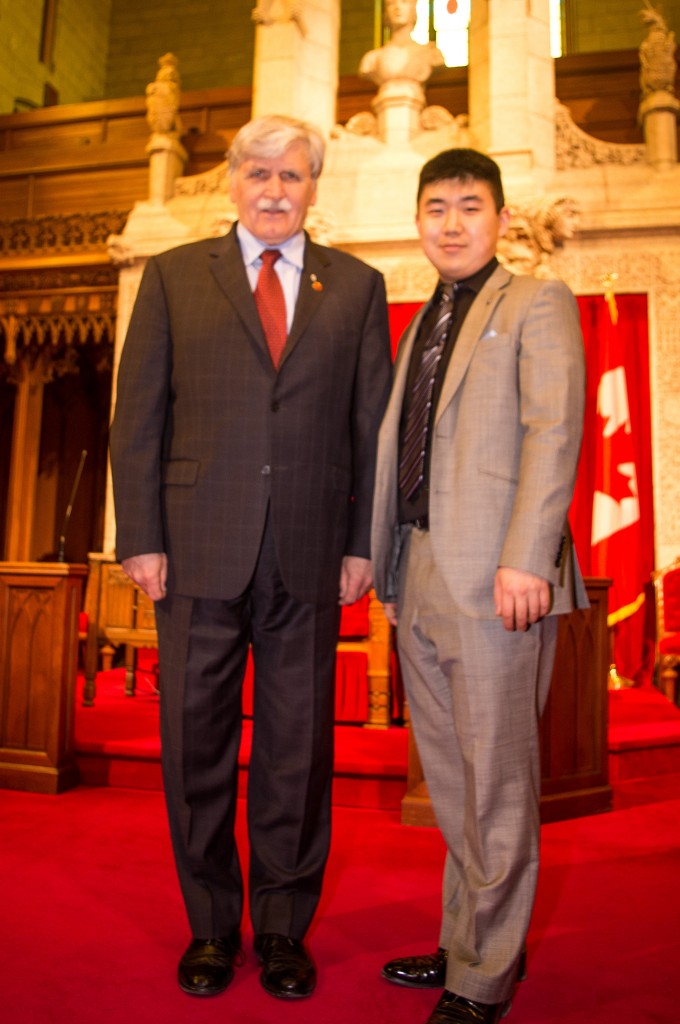 In first year, I was once told that, “Your experience at RMCC will be what you make it to be.” Not only was this quote memorable, but it has proven to be absolutely correct. In my first year, I had to opportunity of being the 2/IC of the RMCC expedition to Ecuador. In my second year, I spearheaded the creation of the photography club at the College, directed the RMCC Gangnam Style parody video which was watched by over 120 000 people online, and became the manager for the Men’s Varsity Hockey Team. Now, in my third year, I’m proud to add an internship in the office of the Honourable 7860 LGen (ret.) Senator Roméo Dallaire to my resume.

The application process for the internship was long, although not difficult. Essentially, I had to prove to both the academic and the training wing that I was a good candidate to be sent away from the protective environment of the College.

Back in December, I found a sublet in a well-priced downtown condo online and registered for courses at the University of Ottawa. When I arrived in Ottawa just after the New Years, I was able to quickly unpack and start the new semester. On my first day, I met the team I would be working with for the next four months. My cubicle was located in the Victoria building, just across the Parliament in downtown Ottawa. My immediate supervisor was Éloge Butera, a Tutsi Rwandan-Canadian graduate of McGill Law School. His family escaped the genocide just before it began. Two of my other colleagues were Allison and Nadia, possibly the most dedicated and brilliant people I have ever had the pleasure of working with. Allison handled the binders, speeches and policy analysis of the Senator while Nadia was the coordinator for the All Parliamentarian Group for the Prevention of Genocide as this organization was chaired by the Senator.

As a special assistant to the Senator, my work was both exciting and fast-paced. My range of duties was more diverse than I could ever have imagined, from public policy analysis to event management. In the office, I was responsible for the Senator’s daily news readings, organizing the massive archive of articles and documents and coordinating upcoming events and drafting briefing notes for events and issues. Outside of my cubicle, I acted as both host and escort for visiting dignitaries, an event photographer and a representative of the Senator at meetings and conferences. Off the hill, I helped to mentor local grade 12 students to plan for their Annual Conference for Commemorating the National Day of Remembrance and Action on Mass Atrocities. This event featured guest speakers from both the House of Commons and NGO’s such as Oxfam Canada and had an audience of over 300 students. I was very glad to have just completed my summer of SLT at CFLRS in St-Jean because having a French language profile of C-B-A ensured that I could handle office work in both English and French.

From my work on team Dallaire, I had gained valuable insight in public service. More specifically, I had achieved a much greater understanding of the issues both domestic and international that faces Canada. These range from defence and veteran affairs to arctic sovereignty and Canada’s role within NATO. As an aspiring pilot for the RCAF, the knowledge gained during this internship will help me to understand my role within the CAF, within NATO, and within the context of what it means to be a Canadian.

Academically, this semester has also proven to be an eye-opener. Unlike my predecessors, I opted to take in-class courses at the University of Ottawa instead of directed readings from RMCC. This move ensured that I can complete all the critical courses to my program at the same time. During my internship, I was able to complete my last English credit, an Economics credit and coincidentally, a politics credit from Introduction to International Relations. In this last course, I was able to fully apply the insight I had gained working in the Senator’s office to the class discussions, the research essays and ultimately the outcome of the course. This semester at the University of Ottawa has also helped me to gain appreciation for the academic programs at RMCC; the dedication of the professors and size of classes have a direct effect on the success of the program.

Finally, I would like to give thanks and acknowledgement to everyone who has helped to make this internship possible. For all the behind-the-scenes support that I have received, I’d like to thank both Dr. Christian Leuprecht and Captain Trevor Marryatt for their endless patience in serving as my point of contacts for the academic wing and training wing respectively. I also would like to thank the RMC Foundation for granting me a bursary to help cover the expenses incurred while on this internship. I would like to thank Senator Dallaire and all the members of his team for the amazing mentorship they have given me during this period.