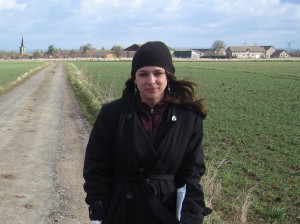 By: Avery Burns (PICTURE ABOVE)

When I applied to complete my Master’s at RMC in War Studies, I had no idea that in one year I would be standing in ankle-deep mud overlooking the great battlefields of the First and Second World Wars.

For several years now, a group of cadets from RMC are given the opportunity to travel to Northern France and Belgium to bear witness to the battlefields of the First and Second World Wars. Prior to the trip, we attended weekly briefings on the battles that took place on the very fields we were to visit. The classes were very informative and they provided detailed insight on strategies, operations, and tactics of the battles which coincided with narratives of heroism, tragedy, defeat and victory.

The tour provided the opportunity to visualize the battles as they played out. We learned of the great military blunders that took place. We learned what made good leadership, and what made bad, what weapons worked, which ones did not. Guided by LCol (retired) Delaney, Major (retired) Boire and Dr. Hennessy, we were provided professional insight on not only how each battle took place, but which tactics and weapons were used. We were able to see the results of RMC disciplines such as engineering, infantry and armored warfare. To honour those who died, at most of the cemeteries Dr. Lukits read a poem or a other tribute that either honoured or was written by those who had fought and died on those blood soaked fields.

The battlefield tour is important for RMC students to remember some of the greatest moments in Canadian history. Particularly for officer cadets and those studying military, the tour gave us the opportunity to experience the battles of those times. Dr. Jack Pike who also accompanied us on the tour reminded us of the important role RMC played in the war, as he knew every detail of RMC graduates who fought in the wars. It was a very somber but meaningful experience to find the words Truth, Duty, and Valour inscribed on some of the graves.

The weather during the tour was typical for the region; completely unpredictable. For the most part, it was cold, wet and muddy, but not uncomfortably so. We were constantly on the move and completely mesmerized. There was no time to think about weather. It is one thing trying to visualize the wet and muddy battlefields typified in photos, books, and movies. Feeling the weight of the mud on your boots and trying to envision carrying a one hundred pound pack whilst being under fire is another.

I was fortunate to have been able to have this experience. My grandfather fought in Normandy in the Second World War. He only started talking about his experience in the war a few years prior to his death, which was one year ago. Being able to see the very towns where he stayed and where he fought provided not only some closure, but also gave me opportunity to pay my respects to that very formative period of his life.

Canada played such a tremendous role in both wars there are no words that can adequately describe the overwhelming feeling of gratitude one gets when you see the maple leaf on those fields. No one was happy to be missing the great Canada versus US gold medal game for the Olympics and to be missing the intense Olympic fever back home. But I think we can all agree that we experienced an unmatched feeling of patriotism overlooking those fields where our forefathers fought and died.

As a civilian Master’s student, this tour was a phenomenal experience. It provided great insight into some of the greatest moments in our military’s history. It also allowed me the chance to get to know the cadets and learn about what life is like for the typical cadet at RMC. I was so fortunate, and this trip will stay with me forever. It was clearly one of the most memorable experiences of my life, and it truly made me believe that I have chosen the right path for my studies.

“We, as Canadians, have much more to be proud about, along with an Olympic Gold medal in the Men’s hockey.” Our flight had finally touched down in Toronto on Sunday, February 28, 2010. As we climbed onto the bus, we immediately tuned the radio for the Men’s Gold medal Olympic hockey game; it had gone into overtime. Despite our exhaustion, everyone was naturally excited at the broadcaster’s announcement of Sydney Crosby’s goal, only 7:20 into the overtime period. I’m sure I was not the only one from the 2010 Battlefield Tour who was thinking the same thing as I reflect on the events from the past week: “We, as Canadians, have much more to be proud about, along with an Olympic Gold medal in the Men’s hockey.”

Beginning Sunday, February 21 a number of Officer Cadets, faculty and post-graduate students like myself, started traveling throughout the north of France visiting sites of Canadian sacrifice, honor and bravery from the Great War and the Second World War. Respectively, we visited various sites on the battlefields of France and Belgium: Somme, Vimmy Ridge, Ypres/Flanders, Dieppe, Normandy and finishing at Caen and the Falaise Gap. One did not need to be a scholar of history or politics to recognize these names etched into Canadian history. It is however, a truly overwhelming experience to visit the sites that I have read so much about during my short career as a student. With maps in hand, and lead by the expert guidance of Lt Col. (Ret’d) Doug Delaney, Maj. (Ret’d) Michael Boire and Dr. Hennessy, it was not difficult to visualize the battlefields as they were up to 90 years ago. It only took a few days before I realized that not even the perfect picture was going to capture the experience, emotion and spectacle of each site. Instead, I opt to try to live in the moment; embracing my muddy boots, rain soaked jeans and the wind (sometimes Sun) on my face while listening to the narrative of battle. The days were long, but they never felt long. From stepping through the Canadian trenches at Vimmy Ridge or wandering the beaches of Dieppe and Juno, I always looked forward to dismounting from the bus and getting my boots dirty at the next site.

My lexicon increasingly developed over the course the tour. Terms and phrases that were initially foreign to a student of strategic studies, I had begun to scrape the surface of tactical considerations like ‘defilade’ and, ‘enfilade‘ and ‘forward facing slopes‘ and, ‘reverse slopes’. I also learned of an emotional perspective of each battle as well. These historical battles were fought by individuals, with individual families left behind and individual experiences. Sometimes this would be expressed through biographies supplied to us from the tour’s leaders, familial historiographies or the epitaphs written on each soldiers grave. At one of the Allied cemeteries for the fallen soldiers of Dieppe, Dr. Lutkits (English Dept. Head), read a poem entitled “To My Brother” In simple prose, the poem describes the character of a brother who left Canada to help liberate a continent. The silence that followed the reading illustrated everyone’s emotion and thought of all the brothers and sisters who had fought and continue to fight in foreign lands.

Of course, when people spend so much time together, naturally new friendships are forged and existing ones solidified. As a civilian, post-graduate student I quickly felt comfortable and was welcomed into the fold of faculty and cadets. The evenings provided us with a time to reflect and discuss the days events. The evenings also allowed us to relax with a good dinner and familiarize ourselves with the local sites and scenes of the city we were staying in that night.

Canada’s armed forces and the men and women that it is made of, will always be a point of pride and appreciation for myself. After the 2010 Battlefield Tour, it is something I can appreciate much more. The memories and lessons will be difficult to divorce from my continued studies, causal reading and even a national victory at the Olympics games.