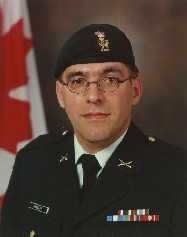 e-veritas: What was your background at the Military Colleges?

Col Guy Maillet: I enrolled in the Canadian Forces in 1979. I spent two years at College Militaire Royal de Saint-Jean. As a member of Tracy Squadron, I lived in Cartier Block. I graduated from the Royal Military College of Canada in Kingston with a Bachelor of Arts degree in Commerce in 1983. Since then I have also obtained a Masters in War Studies and a Masters of Strategic Studies from RMC.

e-veritas: What were the squadrons at CMR? Who were they named for?

Col Guy Maillet: It was 30 years ago, so my memory may be rusty. I recall that each of the Squadrons at CMR were named after famous French Canadian soldiers, politicians or explorers.

* Preston Squadron (3) was named for Lord Frederick Arthur Stanley of Preston, the Canadian governor-general who presented the Stanley Cup.

* Jolliet Squadron (4) was named for Louis Jolliet, who explored the Mississippi River.

* Montcalm Squadron (5) was named for Louis-Joseph de Montcalm, the commander of the forces in North America during the Seven Years’ War.

e-veritas: I understand that you struggled mightily in first year at CMR.

Col Guy Maillet: Yes! Since I had attended high school in Cape Breton, Nova Scotia, I skipped the pre-university program of studies in preparatory year at CMR. I struggled mightily as a first year B.A. studying Business Administration. Not really sure what BA stood for but it was the term used to describe the few of us that entered CMR in first year instead of prep year. I not only had to catch up the academic courses I had skipped. I also had to catch up on the military skills such as drill, and in particular, swimming. My schoolwork would have benefitted from the problem-solving and leadership skills cadets acquired in prep year to become more organized, better able to focus and they learn to work in a team.

e-veritas: As an Acadian, were you bilingual when you entered CMR?

Col Guy Maillet: I was raised as a Francophone. My parents spoke French all the time at home. They knew a little English – just enough to get by. At CMR, because I opted to take my classes in English, I was considered to be an Anglophone. Consequently, I was tested in French as my Second Language. I got a real good score. By the time I graduated I had perfected both languages and managed to lose some but not all of my Acadian accent.

Col Guy Maillet: When I was a cadet, there wasn`t a lot of diversity at the Military Colleges. There were one or two Aboriginal students at RMC/CMR. I am looking forward to learning more about the ALOY program. [Since 2008, 30 + students have been selected annually for the ALOY program based on academic potential as well as cultural community involvement. Students selected in the ALOY competition receive a conditional offer to attend the Royal Military College of Canada to complete a preparatory university year. With tailor made tutoring plans, military leadership training, and cultural programming, ALOY is a useful tool for success and opportunity.]

e-veritas: Outline your key postings after graduation from RMC.

Col Guy Maillet: As an officer of the Armoured Corps, I served with the 12e Régiment blindé du Canada where I commanded at all levels, eventually becoming its eighteenth Commanding Officer in 2001. As a regimental officer, I served on missions in Cyprus and Bosnia and a six-month tour of duty in Germany when seconded to the Royal Canadian Dragoons. I also occupied a number of key staff appointments to include a year as aide de camp to the Army Commander, two years on the Joint staff at NDHQ, three years as senior Military Staff Officer within the Office of the Minister, two years on the Land Staff as the Director of Strategic Concepts and one year as the Director of the Armoured Corps.

e-veritas: You have considerable experience as a trainer and teacher.

Col Guy Maillet: While at the Royal Canadian Armoured Corps School, I was responsible for training standards for officer training within the Corps. While on a two-year assignment at the École d’Application de l’Arme blindée et Cavalerie in Saumur, France, I was responsible for peacekeeping training within the French Armoured Corps. Recently, I spent two years as a visiting professor on the faculty of the United States Army War College where I taught the theory of war, the formulation of national security policy and strategy, as well as elective courses on understanding state failure and public speaking.

Col Guy Maillet: I was promoted to my current rank in 2003 and assumed my current duties as the Director General Canadian Forces Grievance Authority in July 2008. It is a fantastic job. Under the Vice Chief of the Defense Staff, the DGCFGA is responsible for the management and support of the grievance process and resolution of individual grievance cases. I have the chance to learn something new every day. The DGCFGA leads, manages and supports the Canadian Forces Grievance System (CFGS) and prepares grievances for final decision.

e-veritas: How do you stay fit?

Col Guy Maillet: I am a decent runner, and work out regularly. My favourite team sport is pick up ball hockey. At CMR and RMC I played on the intramural ball hockey teams. Ball hockey is very popular in the CF as we recently saw during the international ball hockey tournament at Kandahar, Afghanistan.

e-veritas: Do you play a musical instrument?

e-veritas: Do you come from a military family? Do you have any children?

Col Guy Maillet: I don`t come from a family with a long history of military service.

My wife and I are parents of one adult daughter. We are the proud grandparents of two granddaughters who are five years old and a year and a half old. The Mega on the horizon!

On April 7, the officer cadets of the Royal Military College Saint-Jean had the privilege of welcoming Lieutenant-Colonel Whelan to their mess. LCol Whelan is the Commandant of the Canadian Forces Leadership and Recruit School (CFLRS), where the officer cadets complete their Basic Military Officer Qualification (BMOQ).

From the start of his presentation, LCol Whelan was able to put the audience at ease with his warm enthusiasm and interactive approach. The aim of his visit was to inform the officer cadets about the BMOQ they will be completing this summer at CFLRS. LCol Whelan spoke frankly about what the officer cadets should expect while on course, and how they should prepare for their training. For many in attendance, LCol Whelan’s main message was that we must first be warriors, and that we must be prepared both physically and mentally for the challenges that lie ahead.

LCol Whelan’s presentation was very interesting and educational. CFLRS represents a difficult and stressful phase in the life of an officer cadet, and to be advised by such an experienced person did much to reassure us. Details: At the same time, members of the Vieux Mess will be holding their monthly Chef’s Dinner Special in the Portage Room.

WHAT: TGIF INVITATION TO THE MEMBERS OF THE RMCS CLUB OF CANADA FROM THE OFFICER CADETS OF RMC ST-JEAN

Details: For those who attend the Cmdt’s luncheon as well as the TGIF, there will be a museum tour to bridge the time gap between these two events. See th link http://www.museedufortsaintjean.ca/EN/index-en.htm, followed by a guided tour of the RMC St-Jean Campus highlighting all of the additions and improvements made since the re-opening. 1400hrs – 1600hrs, departing from the Vieux Mess.