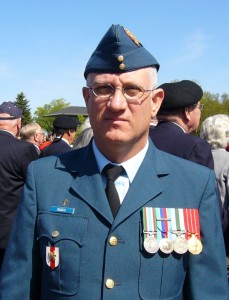 Major Denis Bujold is the Roman Catholic Chaplain at the Royal Military College of Canada.

A CONVERSATION WITH VICTORIA EDWARDS

Describe your training? Were you ordained?

I have a Bachelor of Theology from Universite de Montreal and a Masters degree in Pastoral Theology from Laval University. I was not ordained. As a lay minister, I was mandated the Roman Catholic Church. The Direct Entry Officer is the usual plan of entry into the Chaplaincy. As an applicant, I had to meet Canadian Forces medical standards and successfully complete a Canadian Forces and Branch selection process that included tests, interviews and approval by an acceptance board. Upon selection into the Chaplaincy in 1991, I enrolled in the Canadian Forces was commissioned as a Captain. I completed the Chaplain’s Basic Officer Training Course (Ch BOTC) at the Canadian Forces Chaplain School and Center (CFChSC) in Borden, Ontario. During my basic training in Chilliwack, I was 25 years old while the average recruit was 18-20 years old.

This is true. I am married and my wife and I were very blessed with three daughters. Military chaplains and their families face separation, family turbulence, educational disadvantages, the dangers of armed conflict, should that arise, and all its associated conditions. When I served in Val Quartier, I served on the family violence committee. Family violence is one of the most difficult challenges for a chaplain to deal with. 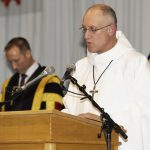 Padres offer spiritual ministry and pastoral support to soldiers and their families in a range of challenging environments. How does the Military College compare with other tours?

I have 12 years of operational environments serving in a wide range of challenging environments including Hospital, School and University Chaplaincies. The Royal Military College is a University Chaplaincy with a difference since the goal of the RMC is to educate and train the future leaders of the Canadian military. As a chaplain, my role is to provide a ministry of presence and offer spiritual teaching programs. At RMC Ceremonies typically require the chaplain to offer prayers. After this interview, for example, I will attend a rehearsal for the graduation ceremony, where I will offer a prayer at beginning and a blessing at the end. My previous posting was a mental health chaplaincy with the 5th field ambulance. I performed church services in public and unit parades, for example as assistant Pastor, Saint-Jeanne D’Arc Chapel, CFB Valcartier. I served with the 2nd Battallion Royal 22nd Regiment (2e R22eR) and 2e Batallion Royal 22e Regiment (3e R22eR). Prior to joining the Canadian Forces, I served as a High School Chaplain.

The military chaplain must provide spiritual ministry to all members of the Canadian Forces, regardless of faith or denomination. Explain.

Yes. As a Chaplain, I work within a multi-faith team that ministers to all CF members and their families, regardless of rank or position. Liaison with other spiritual leaders in the civilian community is expected. My role is not to impose my vision and faith to the world. I respect all beliefs of others and I don`t feel threatened by people who do not share my own faith. Like many chaplains, my academic training focused on Christian, Hinduism, Buddhism and Jewish faiths and traditions. At the Royal Military College in Kingston, chaplains have responded to growing numbers of Muslim personnel. Although I don`t have the answer to every question, I see my role as helping find resources to answer questions. I feel that God chooses to reveals himself differently to different cultures. The better we understand each other, the less likely that conflicts over religious issues will escalate into violence and war.

I don`t have a role in the recruitment of cadets. I have never tried to convince a cadet to stay at the college. I have counseled cadets who were considering leaving with a view to find out why they want to release. Is the desire to leave spontaneous and passing? Does the cadet have plans for life after College? Will the cadet return back to study or take a job? Will the cadet get an apartment or return to mom and dad`s home? I haven`t counseled families of potential cadets so far. I have made a few phone calls during the academic year to reassure parents of cadets.

Do you have a role in academics e.g. teaching ethics, peace and conflict studies at RMC and/or Queens?

I was invited to lecture to cadets in a history course about my experiences as a chaplain serving in Haiti in 1997. Through the study of ethics, we seek to address fundamental questions about the nature of ethics or morality; the determination of moral values; the achievement of moral outcomes; and the development of moral capacity. Although I see myself as a practitioner rather than an academic, I welcome opportunities to share my experiences, to dialogue and have informal discussions with cadets and staff. As a practitioner, my counseling is grounded in ethical principles: think about it before acting; trust your conscience.

Do you have a role in research?

Although I don`t see myself as a researcher, I have worked on a few research studies. At graduate school, I looked at a psychospiritual model for Post Traumatic Stress Disorder based on my experience as a mental health chaplain in a field hospital from 2002-2008. PTSD is not just as a stress and anxiety disorder. An adaptation is required since the trauma impacts the client`s sense of time, place and person and one may never be the same again. I advocate using traditional approaches combined with theories and treatments based on belief systems and life`s deeper meanings found in world`s mythologistes and religion traditions. In a traditional approach, a client`s identity is relegated to that of a survivor or as victim suffering from a disorder, as opposed to emphasizing their capacity for heroic trancendence and transformation. In a previous research project, I looked at the main ethical and phylosophical issues in the abortion debate: comparative rights, question of person-hood and the sanctity of human life.

Do you have a role in helping cadets who are struggling with any of the 4 pillars at RMC (bilingualism, leadership, athletics, academics)?

Since I don`t have good statistics, it would be interesting to do research on what cadets struggle with. In my experience, Cadets struggle to juggle all of the pillars at the same time; some pillars appear far heavier than others. I have counseled several first year cadets who are struggling with the athletics pillar, specifically with the PF test. I made a point of being there at the fitness test this year, and would like to attend sporting events in future. Some cadets arrive at RMC in poor shape and find the active regimen of physical exercise, sports, running and working out challenging. In an academic setting, counseling consists of helping the cadets de-dramatise the situation and find practical solutions to their problems.

How do you keep fit?

At 54 years old, I go to the gym 6 times a week. On Sunday, I do not exercise. I try to do physical activities every day, for example cycling, swimming, and power walks. I don`t necessarily feel fit enough to challenge the young, healthy cadets in athletic competition, but I try to take care of myself.

Do you have any tips for good services?

I like to share the stories of my experiences in East Timor and Haiti. The use of storytelling helps bring the scriptures alive. I try to convey that the scripture is not just words in a book; it means something. I like to dialogue with cadets and show how they can apply the scripture readings into their everyday life. I try not to sermonize. I see every day as an opportunity to reflect about life through scripture. Rather than turning to prayers written by others, I recommend letting the Spirit inspire you with new prayers about those life on campus, mid terms, as well as thoughts for those serving our nation, especially in security and peace keeping missions.

The Army chaplain is to provide spiritual ministry to all members of the Army to foster those high qualities of faith, character and conduct, which inspire courage and self-sacrifice in adversity. Do you have any (other) tips for developing good leaders for the Canadian Forces?

Although cadets may be shy to do so, self-reflection is an excellent quality in a leader.

You explained that your role is to provide a ministry of presence. How do you reach out to cadets?

At every service, 12-30 cadets pray at the RMC chapel. Sometimes, cadets will visit me at my office on campus. I reach out to cadets by walking around. I have informal discussion with cadets in the dining hall over lunch. I am not shy, I say… hi, how are you? I recognize that there is a generation gap between myself as 54 with the young cadets of 20. Our understanding of things is not the same. Many cadets are physically stronger than I am (and have better computer skills). On the other hand, I have knowledge of the spiritual aspect of things and I bring experience of life. In talking with cadets, I keep an open mind. Perhaps we can learn from one another.