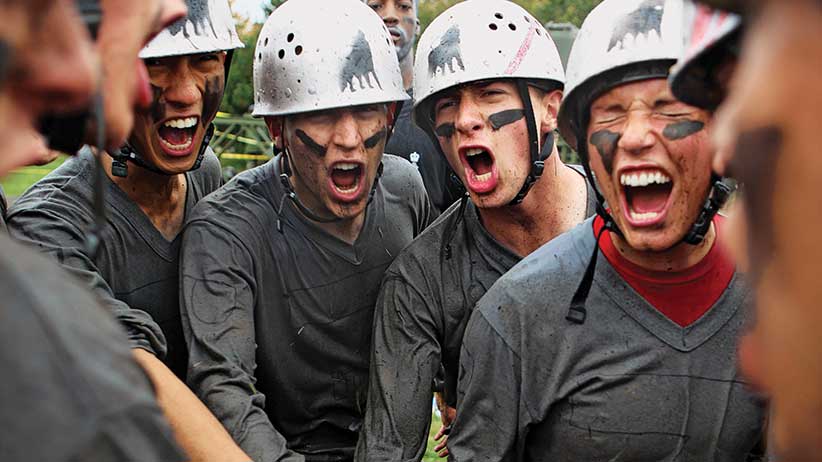 My physical and symbolic arrival at the college began with a march through the Memorial Arch. At that moment, I felt I had stepped into the pages of a history book. I knew, as so many who had taken those same steps have known, that several years of hard work lay ahead before I could march through that archway again as a graduate. The mentally and physically strenuous five-week first-year orientation period showed me what skills I would need to succeed at RMC. Although shoe-shining comes a close second, teamwork was, and continues to be, the single-most important quality. Without it, I could never have scaled a 12-foot wall, silly-sprayed an entire hallway at 3 a.m., or “borrowed” the commandant’s car.

Great emphasis is placed on tradition at this institution, which aims to produce the well-educated and capable officers the Canadian Forces need; however, the exceptional liberal education provided to all students also allows RMC to remain as competitive and modern as larger universities. Small class sizes prove incredibly beneficial, and projects to revamp several academic buildings are currently under way. Life at RMC can be demanding, but the opportunities the school offers make the challenge worth meeting.

Extras
RMC’s dual nature as a military and academic institution creates a unique blend of extracurricular opportunities. The Model NATO team is a formidable competitor at the international level, while the Precision Drill Team thrills audiences with perfectly choreographed sequences and rifles soaring through the air. It is not uncommon to see members of the thriving Scuba Club bobbing in the waters of Lake Ontario, or the Sandhurst Military Skills team rappelling down the side of your dormitory. A surprising number of activities are offered, allowing individuals to explore their interests, whether artistic, military or anything in between.

City Vibe
Kingston lies just across the water from RMC, easily reached by a short, often windy walk across the LaSalle causeway. The vibrant downtown core is populated by superb restaurants and cafés, which offer a welcome escape from typical university fare. An intriguing mix of past and present greets those who explore the Limestone City; landmarks such as Fort Henry serve as reminders of Canada’s history, while a stroll up Princess Street reveals an eclectic and modern cultural hub. An evening walk or jog along the shores of Lake Ontario often provides spectacular sunset views. Those seeking a pastoral setting can take a 20-minute ferry ride to Wolfe Island, which features pristine parks and biking trails.

The Skinny
Tourism.KingstonCanada.com: This site is the most complete guide to the sights, sounds and tastes of Kingston.