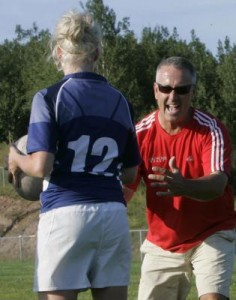 Instead of asking the sport’s largest players to trudge across the pitch to catch fleet-footed backfield players in the open field, McDonaugh has a different thought process.

He feels that once a scrum or set piece ends, players should be responsible for zones on the field and that chasing outside of those areas only adds to fatigue and ultimately, increases the chance to lose.

“Instead of running across the field as a forward, you are going to stay in your spot and be responsible for an area and the ball will come back to you,” McDonaugh said in Saint John Wednesday, prior to the second of three rugby clinics he is conducting in the city.

“That is a lot less running that the forwards do and if the other team plays the traditional way, it is a lot more running for them.”

McDonaugh is the head coach of the varsity rugby program at the Royal Military College in Kingston, Ont., and is also involved with the Ontario provincial team program.

Earlier this month, he coached the Ontario under 17s to a gold medal at the Eastern Canadian championships in Truro, N.S., – that in the under 18 division.

He was contacted by officials with the Saint John Trojans during the off-season about the opportunity to develop both players and coaches in the club.

“My approach is to be more efficient,” he said. “We try to move the ball as opposed to moving the people and we try to focus our energies in a specific spot, rather than blanket the entire the field.”

Despite the hot conditions Wednesday in Saint John, more than 50 male and female players and coaches assembled at Millidgeville North Field to participate in a variety of drills aimed at making life easier for all.

He says some of his approaches and philosophies raise eyebrows but most are quick to catch on.

“It’s nice to have that fresh approach.”

Canada is ranked 14th in the world in men’s 15s, 11th in sevens and later this summer, the women’s national team will compete in the World Cup championship.

McDonaugh says for the Canadians to advance higher in the world rankings, tweaks to their overall development approach will help.

“Canadian athletes have never been excused of not working hard,” he said. “There is no difference in Saint John. Everybody works awfully hard and they will all run through a brick wall. My focus is to get away from the running through a brick wall and work more efficiently and effectively with less energy.”

He said that many players with football backgrounds are attracted to rugby, but he feels players from other sports may be better suited to the game.

“Rugby is not a contact game, it is an avoidance game,” he said. “I think basketball players are more in tune to be successful at the start as rugby players than football players. While there is that collision aspect that there is in football, that is not what we are looking for in rugby.

“We are looking to move the ball, avoid contact and those two-on-ones and three-on-ones you see in basketball are what you are trying to have in rugby.”