Captain Mike French is a 5-year veteran of the Snowbirds and graduate of RRMC, Class of 1994. 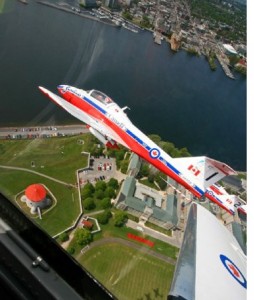 “It’s great to see RMC is vibrant and well and that Officer Cadets are still going to get to experience the exciting career opportunities I’ve had. Military College has been a great foundation for all I’ve been able to and still aspire to accomplish in my career.” 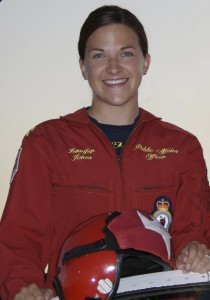 Capt Jones flies with Capt Steve Thompson, one the team’s two advance and safety pilots, in the #10 jet. They fly out to each show site approximately two hours ahead of the main formation, ensuring that each location is prepared to host the team. They flew over RMC as a two-ship at approximately 10 a.m. on May 26th.

“I can’t believe that it’s already been eight years since my RMC graduation and its amazing to see how many changes have taken place in such a short time. Tuesday (May 26th) was the second time I had the opportunity to fly over RMC in the Tutor and it always feels like coming home in a way. I feel extremely privileged to be enjoying such an exciting career and it’s great to be back where it all started for me. ” 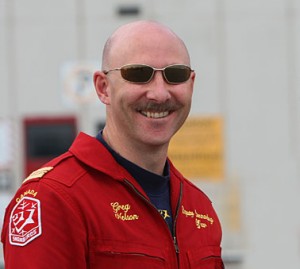 The snowbirds were in Kingston last week. Unfortnuately, the weather did not cooperate and the show had to be cancelled – much to the regret of the majority of Kingstonians.

All was not lost, as the team had a good day of training (the day before the scheduled public event) which included a fly-over of RMC.

More on the Snowbirds Here