Can Mathematicians  Spot The Winning Team Better Than Sports Commentators? Science Daily (June 2, 2009) – Jack Brimberg and Bill Hurley of The Royal Military College of Canada, Kingston, Ontario, point out that sports commentators will often argue the importance of scoring the first goal and often suggest that a team improves its chances of winning considerably by scoring it. This kind of punditry more commonly arises during playoff games which tend to be played more defensively.

However, although the total number of goals scored in a soccer or hockey match is usually small, Brimberg and Hurley wanted to find out whether that first goal is all important or not. They have done this by calculating the probability of the first-goal team winning at discrete points in the match after the first goal is scored based on the number of minutes remaining in the game. They also take overtime into account to adjust the weighting on their formula appropriately.

Team X is playing team Y. Team X scores first and there are T minutes left in regulation time. They then assume that goal scoring follows the law of statistics known as a Poisson distribution, which for hockey and soccer it does. Scoring in other sports, such as tennis and baseball follow a different set of statistical rules as there are different scoring factors and more “goals” scored in a match.

Therefore, the number of goals scored, N, follows the Poisson pattern and has a probability of a certain number being scored in total by both sides of “lambda”. If both teams are playing hard, to win, then there is an equal chance of them scoring after that first goal. However, there are factors such as league position and seasonal performance to take into account, so each of those has a parameter in the final formula.

The formula breaks down as follows: From the first whistle, team X has a 50:50 chance of winning. However, if the team scores at just 5 minutes of play, with 55 minutes left to play in the first period of a hockey match, then the team’s chances rise to 7 to 3 (70%). However, if they score the first goal much later in the game, with say, 25 minutes remaining in the second period, then their chances of winning the match rises to 4 to 1 (80%).

Of course, probability and statistics are notoriously difficult to pin down in real life, so it is best to take any such mathematical punditry with a pinch of salt when watching the fortunes or misfortunes of your team. That applies whether you’re catching the Toronto Maple Leafs in hockey or your flight of fancy is The Newcastle Magpies in soccer.

The researchers’ ultimate aim is not to see sports pundits out of a job, but to provide an interesting example of how statistics problems might be taught in the classroom. The current example requires explanation and understanding of several important topics in statistics, they explain, including the exponential, Poisson, and binomial distributions, probability trees, and the use of conditioning to calculate complex probabilities.

For a quick look at their actual thesis, click HERE 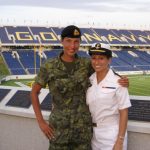 -Marsalie  graduated as part of the class of 2009 with a Honours English degree. She is a MARS Officer and is presently at RMC doing post-grad work. Here she is pictured with one of her friends while on exchange at the US Naval Academy in the fall of 2008.

0400hrs, Wednesday September 3rd, 2008.
I am awoken by the most obnoxious sound I have ever heard: The US Naval Academy fire alarm (a device that happens to be located just inches away from my head, roughly a foot above my bunk). Panicked, confused and more than slightly disoriented, I stumble out of my bed in search of my three roommates, my purple terrycloth housecoat and a pair of running shoes. As I’ve only been at Annapolis for two weeks, I’m unsure of where I’m going, but given what I understand to be the nature of the Academy, I reason that it will probably involve running. In hindsight, the housecoat was probably overkill given the balmy Maryland weather, but if my experience with fire alarms in LaSalle has taught me anything, it is to dress for the worst and hope for the best.
As I round the corner of our room, grabbing my RMC toque as I go, I spot my roommates– all in matching Naval Academy PT strip, two sitting by their computers, one leisurely brushing her teeth.
“Where on Earth are you going?”
I stop just as I grasp the door handle and catch a glimpse of myself in the mirror: striped pyjamas, purple robe, RMC toque (bauble intact) and running shoes. Who said that fire safety had to be fashionable?
I wheel around to face Jenn, who is in the process of checking her e-mail. “I’m trying to avoid being burnt alive! Let’s go!!”
The girls burst into laughter. “That’s not the fire alarm, silly!”
Suddenly, I become aware that the bell has stopped, though the ringing in my ears has yet to do the same. As my heart rate returns to normal, I collapse in my desk chair, take off my toque and wipe the sweat that has started to form on my upper lip. Is it possible that in my state of exhaustion I had imagined the entire thing?
I crawl back into bed, not bothering to remove my housecoat so as to conserve as much of the hour of sleep remaining to me before morning formation as possible, my tiny foam mattress looking oh-so inviting…
“Canada! What are you doing? Get up! It’s not time to go back to bed!”
Too tired to argue and certainly too groggy to think logically, I give what can only be described as the most helpless look at my disposal.
“I thought you said it wasn’t the fire alarm…?”
“It’s not.”
I briefly consider burying my head under my pillow and going back to bed, weighing the consequences of disobeying direct orders against the potential of regaining some of the sleep that I so desperately lacked. I cock my head to the side and stare at my roommates, desperately wishing that they would stop being so vague; in fact, as my mind begins to wander, I can’t help but feel that there should be a rule making all conversations had before the ungodly hour of 0600 absolutely explicit in nature. Jenn hands me a tiny brown bag.
“Like I said, it’s not a fire alarm. It’s mandatory urine analysis screening. Go pee in the cup.”
She gives me an exasperated look, as if she cannot possibly understand why any rational person could not make the connection between the fire alarm and a 4am wake-up for surprise drug testing. Silly Canadians, always needing an explanation.
I don’t bother to argue; after all, this is all part of the exchange experience.

Welcome to the surreal life.