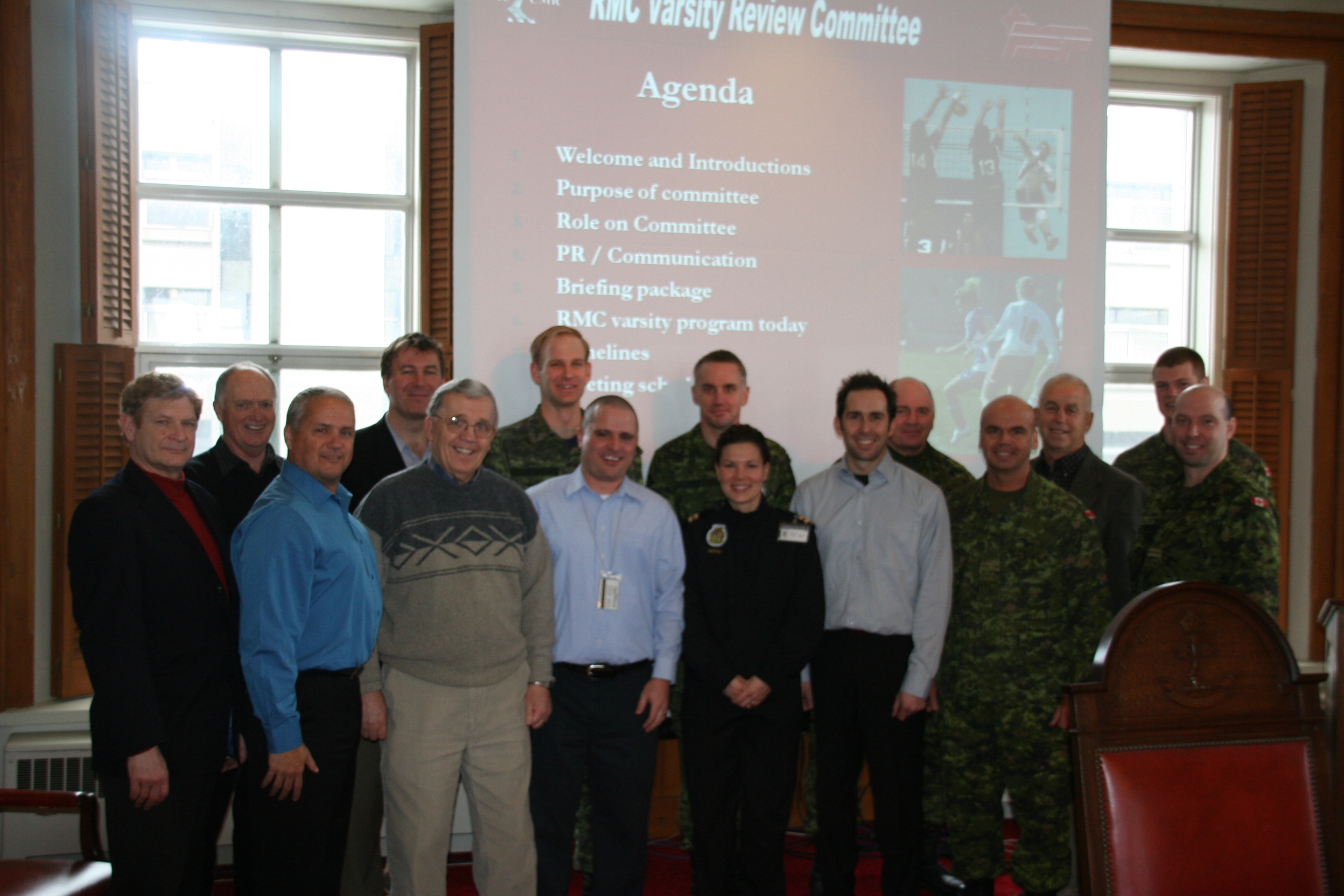 The varsity review committee held their first meeting last week.  We asked Director of Athletics, Darren Cates what he thought of this meeting and what was the way ahead.

RMC along with community sponsors will be hosting a multi-sport conference called “coaching the coaches” aimed at amateur coaches all the way up to university level coaches. The main goal of the weekend is to help coaches with any experience level learn how to better manage and train their teams. I had a chance to speak with RMC Men’s soccer coach Victor Mendes (photo left) about the soccer clinic from February 12th-14th.

eVeritas – Who are the main instructors?

Coach Mendes – There are many high profile international soccer coaches instructing for the weekend, including:

eVeritas – Who can attend? How do they register? What is the deadline for registration?

Coach Mendes – Any athlete or coach (of any level) can attend. Register online www.coachingthecoaches.ca

The Deadlines are as follows:

Feb 1st (Rugby and Soccer), April 16th (Basketball, Volleyball and Football), and May 15th for Hockey.

eVeritas – Is this the first year that this clinic is being held locally?

Coach Mendes – No, there have been 8 CTC conferences since 2007, and over 2000 coaches have attended.

eVeritas – How many visiting coaches do you expect to register and attend?

Coach Mendes – There were over 200 last year, and we are expecting as many or more than that this year.

eVeritas – What involvement does your varsity players have with this clinic, if anything?

Coach Mendes – The RMC men’s soccer team will be used as demo models for the clinics.

eVeritas – Does the RMC exposure give visiting coaches a better understanding of the college and what the RMC varsity soccer program is all about?

Coach Mendes – The clinics are great promotion for RMC. All participant coaches eat at RMC mess and get to see campus and our excellent facilities; this is priceless recruiting exposure for RMC. Along with newspapers, flyers and online the clinics are advertised on the Team Canada website. This weekend will expose RMC to top coaches who represent approx 10,000 youth athletes, who are also the potential future cadets of RMC.

eVeritas – If any of our readers have questions concerning the clinic – who should they contact?

The RMC Women’s Volleyball team played against the Queens University Gaels with a final score of 17-25, 19-25 and 13-25. The girls worked hard and forced the Golden Gaels to make mistakes. (I) Brianne Baum had 14 set assists and was named the Player of the Game.

The lady Paladins then went on to play the York Lions the following day. The SAM gym was filled with a competitive atmosphere when the game began in the early afternoon. There was a lot of communication on and off the court and it showed through the way the Paladins set up and executed their plays. Again, (I) Brianne Baum was selected as Player of the Game, helping her teammates with 17 set assists. Brianne was optimistic about the improvements that the girls have been making, saying that the RMC lady Paladins “are starting to come together as a team. Hopefully, we will take a game off one of the teams coming up at the end of the season”.

This past weekend, the RMC lady Paladins volleyball team played the University of Ottawa Gee Gee’s on their home court. The final scores of the match were 27-25, 16-25, 9-25 and 20-25. There was a certain excitement in the air when the Paladins stepped onto their home court for the beginning of the match. The match began at a fast pace and the Paladins were trailing 7 points behind the Gee Gees at 18-24. They began to fight and caught up to the Gee Gees with the help of (II) Melissa McCoy. The set was taken by the Paladins’ strong defensive and offensive plays. A competitive spirit and high hopes brought the Paladins onto the court for their second set. The Gee Gees responded in a quick and competitive manner after the first set was taken from them. The lady Paladins were forced to fight much harder for their points. (I) Norah Collins, number 16 in the OUA Top 20 ranking, aided her teammates with 6 kills and 13 digs in her team`s fight. Even with the loss of the last two sets, the women still went out onto the court with their heads held high, and smiles on their faces. The final set score showed that the Paladins had changed their game strategy and that they were not handing any points over to the Gee Gees for free. (I) Nicole Shingoose and (I) Kelsey Chang helped the team effort with 14 digs each. (IV) Kim Hymers had 5 stuff blocks of her own. (II) Melissa McCoy was named Player of the Match – an appointment that was well deserved with a personal total of 16 kills and 6 digs.

The following day, the RMC Women’s volleyball team went up against the Brock University Badgers with a final score of 22-25, 21-25 and 25-27. The Lady Paladins never gave up an easy point in their hard fought matches. The competitive atmosphere was evident and (I) Brianne Baum contributed greatly with a total of 31 set assists, 15 digs, and 1 serve ace. (I) Norah Collins also helped lead the team with 14 kills and 13 digs. The Lady Paladins forced the Brock Badgers to rethink their strategy during the 3 set match, while continually progressing through their own. (I) Kelsey Chang helped the team effort with 17 digs and (IV) Kim Hymers also contributed with 2 stuff blocks. The player of the match was once again (II) Melissa McCoy with 13 kills, 5 serve aces, 4 stuff blocks and 5 digs. Two-time MVP (II) Melissa McCoy was enthusiastic about the games that RMC played that weekend, saying that she was “really happy to see the team come together this weekend, everyone played well. We are looking forward to the challenges ahead of us this season”.