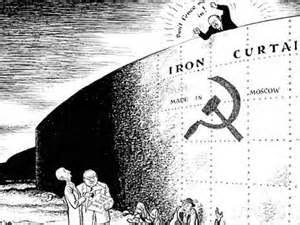 The Sinews of Peace: The Original Cold War Perspective

Winston Churchill, born in 1874, had been involved in British politics from his first election to the House of Commons as a member of parliament in 1900. Until his retirement in 1955, Churchill was a preeminent statesman both at home, in Britain, and on the world stage. Churchill served both in the Commons and on the front lines during the First World War but most significantly he had led Britain through the Second World War as Prime Minister. In 1932, prior to the outbreak of the Second World War, Churchill had tried to warn the world of the threat that Hitler and his brand of fascism posed to democracy. He was, at the time, largely ignored, but history would ultimately prove him right. Similarly, less than a year after the war had ended, Churchill again attempted to warn the free world of the imminent threat posed by yet another totalitarian regime: the Soviet Union and its doctrine of universal communism. On the fifth of March 1946, Churchill delivered a speech at Westminster College in Fulton, Missouri to members of the academic staff, students, and most notably, President Harry S. Truman. The speech, entitled “The Sinews of Peace”, is an excellent primary source for anyone analysing the growing mutual distrust between the Soviet Union and Western Democracies and the genesis of the Cold War.

“Through their meetings in Yalta, Tehran, and Potsdam, Churchill acquired a firsthand appreciation of Stalin and his greater (communist) motivations. With the death of Roosevelt in 1945, Churchill essentially became the best, and perhaps only, Western leader to have had such a close interaction with Stalin.” 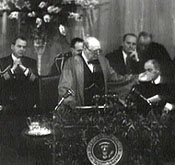 Churchill delivered his speech, “The Sinews of Peace”, at Westminster College, Missouri on the fifth of March 1946, less than one year after V.E. day heralded the end of the Second World War in Europe. Although the end of the war saw an end to Nazi aggression and expansion, it also saw the expansion of communism across the globe. The time and location in which this speech was delivered is relevant to an analysis of the Cold War in that Churchill unequivocally marks the genesis of the understanding, or conceptualization, of a new world order. This new world order is highlighted by the emerging rift between the capitalist, democratic West, and the totalitarian, communist East. Churchill does not deliver his speech in obscurity, but rather to an audience that not only hails from the leading Western power, but also has the ability to act upon his words in order to set change in motion. Thus, the timing and setting served to not only accentuate the message of the speech, but to ensure its relevance to the analysis of what would become the Cold War.

As author of this speech, Winston Churchill is the definition of credibility. An elder statesman by this time, Churchill had spent the better part of the century at the centre of world politics. In 1932 he had predicted the Nazi threat before many, including his own government, had really taken any notice of it. Shortly thereafter, as First Lord of the Admiralty and then Prime Minister of Great Britain, he led the allied war effort against the Nazis. At one point during the Second World War he led the only significantly strong Allied nation against the tyranny of fascism. As the Soviet Union and the United States joined the war effort, Churchill worked with both Stalin and Roosevelt as a member of the ‘Big Three’ to orchestrate the allied victory. Through their meetings in Yalta, Tehran, and Potsdam, Churchill acquired a firsthand appreciation of Stalin and his greater (communist) motivations. With the death of Roosevelt in 1945, Churchill essentially became the best, and perhaps only, Western leader to have had such a close interaction with Stalin. At the time Churchill delivered his speech “The Sinews of Peace”, he was an elder statesman who had just recently been voted out of political office by the people of Great Britain. His long career in politics essentially at an end, he had little to gain politically or otherwise by misrepresenting the truth and therefore could be counted on to offer a sober, balanced, and credible perspective based on a lifetime of experience and observation. For this reason, Churchill, as author, serves to legitimise this speech as an excellent primary resource in the study of the Cold War.

The audience of Churchill’s speech is relevant too to the study of the Cold War. The fact that Churchill was addressing not only a gathering of academics and intelligentsia—essentially those who could consider and debate the content of his speech—but also the one man who could act upon Churchill’s concerns—the President of the United States and leader of the free world, Harry S. Truman, makes this speech especially relevant. This was no insignificant audience, but one that could sympathize with his outlook, be drawn to it in a spirit of comradeship, and be motivated to act upon his concerns and projections. If any audience was apropos to a message of establishing and strengthening the United Nations, and could understand and appreciate the concept of military superiority as opposed to simply a ‘balance of power’, this was it. Consequently, the audience very much serves to underline the speech’s relevance to the scholarly analysis of the Cold War and again makes “The Sinews of Peace” an excellent primary source.

Winston Churchill delivered his message in the form of a speech: a format that eschews detail for brevity, conciseness, and maximum impact or effect on the target audience. In order to gain the audience’s support, he appeals to them by noting the American contributions to both World Wars and speaks highly and respectfully of these contributions. As this is a speech, and he is somewhat limited by time, it is crucial that the greatest impact be made in the fewest possible words. Churchill therefore employs imagery, specifically, metaphor like “Iron Curtain”, in order to appeal to the emotions of the audience. The purpose of Churchill’s speech is to caution and to persuade. Based upon his observations, the free world was at a critical point where action was required to ensure global security. His belief was that global communism and Soviet hegemony would be the next crises to face the democratised world and that the moment must be seized immediately by the Western democratic nations to counter this. Measures he suggested included the development of a strong and effective United Nations and the necessary build-up of Western military might not merely to balance that of the Soviets (as this would simply be an invitation to ‘test’ the West) but to exceed it considerably to effect total deterrence. The material Churchill selects for his speech works synergistically towards the dual purpose of cautioning and persuading. As noted, his use of imagery, such as “the iron curtain has descended across Europe”, appeals to the emotions. In order to further appeal to the emotions and perhaps, fears, of the audience, he describes how Soviets hold a disdain for military weakness and pointedly notes the current events in Europe where communism is spreading. Furthermore, he instills concern and perhaps apprehension by acknowledging the past sacrifices of the U.S. in wars that it never wanted to be involved with. This serves to establish a sense of kinship between the speaker and the audience. The speech’s purpose, as determined from form and content, was to caution and to persuade. For a student analysing the genesis of the Cold War, this primary source is relevant in that Churchill’s cautioning and persuading actually did have an effect on the US and its foreign policy. One needs to look no further than U.S. Secretary of State John Foster Dulles’ 1954 proclamation that the US must meet communist aggression with ‘massive retaliation’, and Eisenhower’s belief that small, unstable countries—such as those in southeast Asia could fall to communism like ‘falling dominoes’. ,

So, taken together —- the credibility and respect commanded by the speaker, the audience of those that could act upon the speaker’s words to effect change, together with the form, content, and delivery of the message all work synergistically serving to caution and to persuade the United States as the new leader of the democratic world. The fact that future Cold War events played out as Churchill projected and advised, for example, Soviet expansionism, the U.S. policy of “massive retaliation” and the fear of ‘falling dominoes’ in South East Asia, serves to solidify the relevance of this speech and thus its quality as a primary source for a study of the Cold War.

Liam Norris is a Political Science student at Carleton University

What Are You Reading During the Dog Days of Summer?