24125 David Kay graduated as part of the class of 2009 with a Degree in Economics. He is spending two months on OJT with the Brazilian navy before his MARS IV starts this fall. He sent this to us a couple of days ago after arriving safely in Chile following eleven days at sea, halfway through his trip around South America. 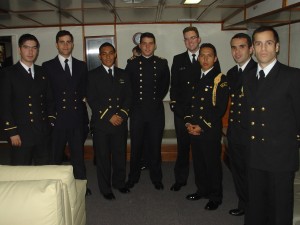 Like the recruiting posters claim, and as every current and ex cadet fully understands, RMC is a university with a difference. There is no other university in Canada that I know of where within three weeks of earning a degree, a graduate will find them self sailing on a foreign Naval ship in the South Atlantic (and I mean SOUTH Atlantic. It’s bloody cold 300 miles North of Antarctica) on a two month trip around South America. Yes you read that correctly. Because MARS IV does not start until November 30, the Navy decided a good OJT posting for me would be onboard the Brazilian Navy’s training ship U27 Brasil (no that’s not a typo, there is supposed to be an s in there).

The ship is making a six month tour as a final exercise for the recent graduates of the Brazilian Naval School (equivalent to RMC) with stops in almost every country along the South American Coast, Central and North America, many European countries, and Africa. I am attached posted to the ship for two months. I began the journey in Rio de Janeiro, and will depart in Miami on August 22. Two other junior MARS Officers will replace me for two-month legs beginning in Miami then Lisbon. Other foreign Officers are aboard from Venezuela, Mexico, Argentina, Uruguay, Chile, Honduras, Paraguay (a land locked country so why they have a Navy is beyond me, but whatever), India, Guyana (which I rather embarrassingly discovered is not in Africa, but Northern South America), Spain, Angola, Portugal and the Brazilian Army, Air Force and Merchant Marine.

I arrived in Rio a week prior to the June 20th departure, and spent a few days at the Naval School before moving to the ship. I 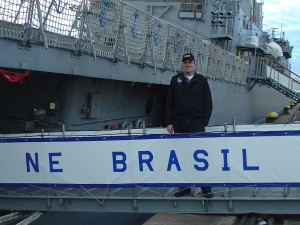 must say, the training systems between our two countries are very different, and RMC is very liberal compared to the Naval School, and most other military academies. For instance, single rooms are very uncommon, and no other Officer aboard ever heard of having a single room before their final year. The privilege of owning a car (or multiple cars as the case may be) and using it (them) while at the academy is also mostly unheard of. Even basic comforts that we take for granted (hot showers for instance) are luxuries not provided in many foreign academies (and ships for that matter). While staying at the Naval School the foreign Officers were housed in second year accommodations, and since hot water showers are not granted until the third year, we woke up with ice-cold water each morning. Also, the ship seems to be at constantly changing degrees of water restrictions (usually increasing restrictions), so hot showers on board are a rarity (actually showers in general are hit and miss). One final note on this theme. As much as everyone gripes about the RMC mess (and I was as much a part of this popular RMC pass time as anyone), enjoy the quality and variety. Bread and STRONG coffee is about it for breakfast, and other meals aren’t much better in the Brazilian Navy. However, on the flip side, phrases like “driving the body, moving with a sense of urgency, maximum speed and aggression etc.” are not part of some training doctrines, and timings seem to be a recommendation (as opposed to the “word of God” as we’re accustomed to) around here. 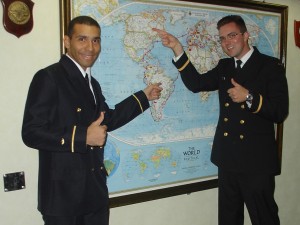 But enough complaining about food and water. One thing (among many) that RMC and CF training in general taught me was the value of teamwork and (especially important on this trip) tolerance towards others. Since I can’t (couldn’t) speak a word of Portuguese or Spanish (I’m still limited to basic greetings, but have a good grasp of cursing and swearing in those languages), there is obviously a huge language barrier. My two cabin mates are Mexican and Venezuelan (both Spanish speaking) and there are only three of us (out of roughly 400) onboard relatively fluent in English. So, 95% of the time I have no idea what is going on, which can be extremely frustrating to say the least. As a result, the three of us have to work together, share information and tolerate each other’s extremely different personalities and backgrounds in order to get through the day with some semblance of competence. I am also becoming quite adept at giving and receiving hand signals (sort of invented my own sign language) and reading vocal tones and facial expressions to transmit and receive directions.

There are some very interesting port visits on my leg of the trip. So far we have stopped in Rio Grande Brazil, Buenos Aires Argentina and Montevideo Uruguay. We are currently sailing past the Falkland Islands, will be entering the Pacific Ocean, then steaming north, stopping in Valparaiso Chile, Lima Peru, and Guayaquil Ecuador. We will transit the Panama Canal, then stop in Cartagena Columbia. A port visit was scheduled for Honduras, but with the recent political coup, resulting chaos, martial law and current state of chaos, it’s unlikely we will be stopping there for obvious reasons. Therefore we may stay a few more days in Columbia, stop in Puerto Rico (my personal favourite option, but no body asked for my opinion), or sail to Miami ahead of schedule and stay a few more days than anticipated. 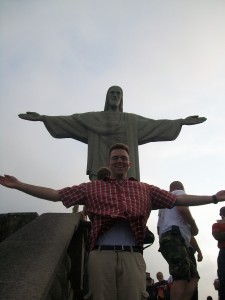 Although each port is very different, and some are better than others, the one common theme that runs among them is they all increase my appreciation for Canada, and our extremely high standard of living. Since arriving in Rio three weeks ago I have hardly seen a neighbourhood, street or even many houses that compare to even the poorer areas in Canada. The widespread (and extremely obvious) prostitution, stray dogs and random animals roaming the streets, dilapidated buildings, destitute slums, high levels of crime (three Brazilians have already been robbed during port visits), general dirtiness and overall beat to crap state of everything make the green rolling hills of Southern Ontario, the Rocky Mountains of BC and the Kingston waterfront look pretty inviting indeed. This trip (deployment?) is one heck of an eye opening experience, and a fabulous learning opportunity. I strongly encourage all cadets to take advantage of any and all opportunities both while at the college and after graduation to experience foreign countries, militaries and cultures. It will change your view of RMC, the CF and Canada in general, and make you appreciate how good we Canadians have it. 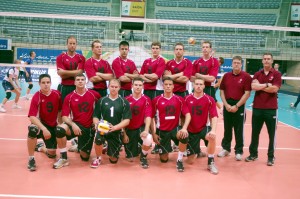