On January 23rd, 100 Cadets left RMC and travelled down to West Point Military Academy to participate in the annual RMC/West Point exchange weekend – a tradition that is nearing its 100th consecutive year of existence. Representing a cross section of all 12 Squadrons, years, academic programs and military trades, the RMC Cadets were matched with a West Point host of the same year. During their time at the Academy they had the opportunity to experience life as a West Point cadet, including attending academic classes, being subject to their respective “year privileges”, and attempting to eat a meal at the amazingly efficient mess hall, which serves over 4000 people in under 10 minutes.

In addition to experiencing daily life, the RMC cadets had a chance to run the IOCT (obstacle course), ski on the local slopes, and travel into the nearby town. Most importantly, the exchange gave the cadets a chance to develop inter-service relationships, and experience first-hand the way that other military colleges are run. I know I personally found it extremely interesting how similar the two institutions are – although West Point is larger both in scale and funding they face many of the same challenges and idiosyncrasies that we experience here in Kingston. It was eye opening to see that we belong to a brotherhood much larger than just the RMCC community, a fact that was driven home not only by the generosity of our West Point counterparts but also the local populace: more than once an RMC student walking to or from the Exchange (Canex Equivalent) was offered a ride and thanked for their service by ordinary citizens and military spouses driving by.

To finish off the exchange the RMC cadets and their West Point hosts attended a basketball game between West Point and American University. The game was close up until the final few minutes, where American University pulled ahead, leading to a disappointing loss. I’m sure that, with his gregarious cheer and incessant bugle-playing few West Point cadets will forget 26720 OCdt. Kyle Ryan, who led the Canadian contingent in a show of support for the Army athletes.

In hindsight the exchange was a success, and as well as broadening our perspective on our time here at RMC, I am confident that the friendships developed south of the boarder will prove valuable relationships throughout our future careers. 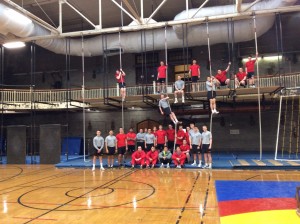 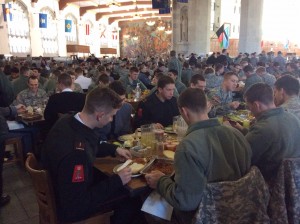 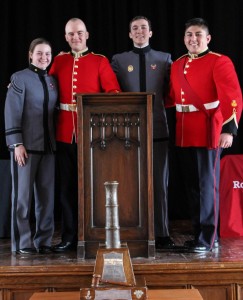 On the afternoon of January 25th 2014, Officer Cadets from the Royal Military College of Canada and Cadets from the United States Military Academy debated the resolution “Show me the leaders: Be it resolved that the United States, the United Kingdom, and Canada should take combined military action to stop the civil war in Syria.” The judges for the debate consisted of the Dean of West Point Brigadier General Trainor, PhD., Vice-Principal of Academics and Dean of the Division of Continuing Studies for the Royal Military College of Canada Dr.Pierre.R.Roberge, and the Principal and Vice-Chancellor for Queen’s Dr.Daniel Robert Woolf. The Debaters from RMCC were Officer Cadet Nicholas Samson Huxter, and Naval Cadet Albert Edward Woolley, from West Point it was Cadet Meghan Wentz, and Cadet Meyer Ungerman. This year it was RMCC that was hosting the weekend and the debate took place in Currie Hall.

The judges found in favour of RMCC allowing them to reclaim the Exchange Weekend Debate Trophy which they had lost the previous year.

The video was filmed by OCdt Mathieu Drolet and OCdt Robert Sharp, and editing was done by OCdt Sharp.