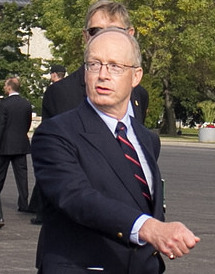 I read with great interest the article on Ken Taylor. My mother, Nancy Chance, had a small part in the Iran Caper. That summer she was going to travel to Greece to visit my godparents, Jim and Barbara Barker, as he was the Canadian Ambassador to Greece. While the Barkers were posted outside Canada, they had rented their Ottawa home to a senior US Embassy staffer and his wife, who like the Barkers, were posted outside their country.

This individual (probably best to leave his name and role out of this email) knew that my Mum was going to see the Barkers, and asked if my mother would be willing to go to the Iranian Embassy in Ottawa on the pretext that she was going to continue her trip on to Tehran after Athens, and could she get an Iranian entry visa. She was asked to keep this confidential, which she did and she did indeed obtain the Iranian Visa imprinted/attached to her Canadian passport which she then gave to the US Embassy officer. The passport was returned to her and my Mum went on her trip to Greece but did not go to Tehran.

It was later that the world heard of the six Americans who came out with the Canadians. After this had taken place, it so happened that Cyrus Vance, then US Secretary of State, came to Ottawa on business and it was arranged that my mother speak very briefly with him. His words to my mother were very brief, “I can not thank you enough for you did for our country”. One can only assume that Canadian passports were made for the six Americans based upon the Visa that was part of my mother’s passport.

I had occasion to recount this story about five years ago at a business training session that I was attending in Scottsdale, Arizona. We were about thirty in attendance, mainly Americans, and after telling this story, one of the group came up to me and said that he was one of the six Americans who came out. His name is Frank Weingartner, and I put him in touch with my mother. Frank subsequently wrote her a lovely letter to thank her for her role in securing his escape from Iran. At the time, he had just graduated from university and before looking for a job, had decided to travel around the world. He was in Iran when “the balloon went up”, and went first to the US Embassy, saw that it was surrounded, and then went to the Canadian Embassy where he was taken in.

The rest is history.