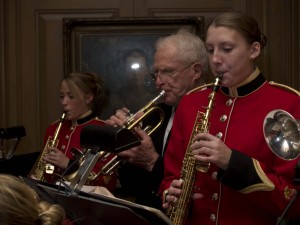 Don Currie is a living legacy of the lifelong commitment and culture surrounding Canadian Military Colleges. Many of you may have seen him parading with the RMC band at virtually every parade over the past 10 years and wondered who he was, well I am here to tell you that he is the type of person whom we should all aspire to be.

At eighty years old, Don has no intentions of slowing down. He swims at the fieldhouse at lunch everyday, sails twice a week, volunteers in four bands, bikes when he can, and wakes up to push ups every morning. He began life on the waters of Georgian Bay.  His four years in Cadets led to a scholarship for Royal Roads, from which he graduated in 1948. Many of his class went on to the Regular Force, or even to the Royal Navy, Don, however, went to the University of Toronto to complete a degree in chemical engineering, all the while serving in the reserves throughout the 1950s. 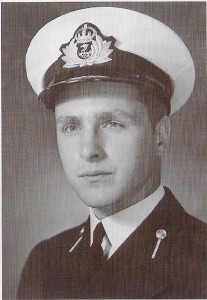 He even tried his hand at civil engineering at Queen’s, but decided that the civil side was not for him. Following that he let his two week summer training turn into a couple of years with the Naval Reserves, before taking up work as a plant engineer at an Algoma Steel coke plant. He then opted to pursue a Master’s Degree in Oklahoma in petroleum refining, which is where he also got married to his wife of almost fifty years. He then worked in the oil industry for Sun Oil before taking up a position as a process engineer for what became the Union Carbide Corporation.

However, always on the move, and because he “had to be on the water,” Don moved to Kingston in 1969 and took up a position with the Air Pollution Control Service, which later became a part of the Provincial Ministry of the Environment, where he stayed until his retirement in 1991. He has had the same sailboat since 1971, and has not only been a regular participant at the Kingston Yacht Club, but has also done numerous trips along Atlantic Canada as well, often with ex cadets aboard as crew. More recently, in February of this year he and his wife completed a trekking trip around the volcanoes and mountains of the Chilean Patagonia. 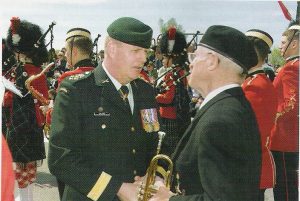 Shortly after he took up permanent residence in Kingston, Don decided that he wanted to learn how to play the saxophone, as his daughter was getting into music as well. He found out that if one learns the clarinet first, then the sax is far easier to learn, and with the loan of a clarinet from a friend, he began playing and has since mastered those two instruments as well as the trumpet. Currently Don is a member of three different bands; he assists with the Lasalle Secondary School band, the CFSC base band (the descendant of the Vimy band), and the RMC Brass & Reed and Stage bands. There are other volunteers for the RMC bands as well, but as the only one who knows how to march, Don can be seen at virtually every parade, not just the concerts.

Mr. Currie also served as the President of the Kingston ex Cadet Club from ’03 – ‘05, where he invited MGen Walter Natynczyk to be the speaker at one of the luncheons, where the topic soon became monopolized with sailing. At the most recent Sunset Ceremony, while the band was forming up for pictures, this gave  new CDS, now Gen Natynczyk, the opportunity to again inquire “How is the sailing?” much to the confusion of the other band members. One year previously, when CDS Gen Hillier was inspecting the band as part of the commissioning parade, instead of simply inspecting the first rank as is typically the case, he continued down the line to speak to Don and personally present him with a CDS coin.

Don is as active today as most cadets a quarter of his age are, along with his wit and adventurous spirit, this has kept him looking decades younger than his eighty years. Don has been a regular fixture at parades and sailing events in Kingston for the last 40 years, and at the rate that he is going, he will be around for forty more.