This week, we begin a new feature in e-Veritas, Whatever Became of … In each issue an ex-cadet and / or a former staff member will reflect on his or her time at military college(s), and talk about what they’ve been up to in recent years. We hope you enjoy.

Claude Scilley has been reporting on athletics at RMC since 1972. You can follow his coverage of university sport on his blog: 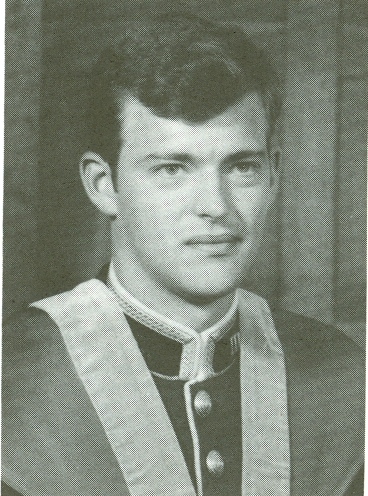 A year after Boston Marathon bombings, 14632 Simon and 15519 Sandra Sukstorf reflect on tragedy

After he finished running the Boston Marathon a year ago, Simon Sukstorf went for a walk.

All the while, his wife, Sandra, was nipping at his heels.

“I’m giving him hell because he’s not moving fast enough,” she says.

Don’t get her wrong. Sandra Sukstorf is not a cold-hearted person.

The Sukstorfs were in the middle of the explosions that rocked the finish-line area at last year’s Boston Marathon. Their odyssey after those blasts in some respects made the challenge of running the race pale in comparison.

“Knowing that there’s no way you can defend against (another bomb), and when they tell us, ‘There’s a threat in this area,’ it’s, like, ‘OK, let’s go!’” Sandra said, “and he’s trying to stumble along.

“At that point,” Simon explained, “I was beyond caring.”

The Sukstorfs — Simon, 52, is a 1984 engineering graduate of Royal Military College while Sandra, 49, is an economics major from RMC’s Class of ’86 — are both back in Boston today, where Simon will run again and Sandra will make her debut in the venerable race.

They’ll both be quite happy if, at the end of the day, the only source of exhilaration is the race itself. Once was enough to endure tragic events such as those of 2013, when two bombs killed three people and injured more than 250 others.

At the time of the explosions, Simon Sukstorf had just finished the race and he was making his way back to the Lennox Hotel, where he and his wife were staying with another couple. When the blasts occurred, he was perhaps 50 metres away. “I was literally just around the corner,” he said. “I could see the smoke. I could hear the screaming.”

An Air Force colonel, an aerospace engineer with special training in explosives, Sukstorf recognized the sound immediately. At first, he thought perhaps it was some sort of ceremonial salute from an artillery piece, as is done at the annual military road race in Ottawa. “Then I thought, ‘Wait a minute, I don’t remember seeing any cannon, that probably was a bomb,’ and then the second blast went off and that confirmed it.

“I remember thinking, ‘OK, this is going to be a bad day.’ Then there was this surreal silence, for a split second, and then I heard all the screaming.”

His foremost concern was for his wife, sitting in a hotel room that overlooked the site of the first explosion. “She wasn’t very high up,” he said. “I knew she was watching out the window, watching for me to finish the race.”

He ran against the flow of people fleeing the blast. “My concern was the glass had been blown in on her in the hotel room.”

The Lennox was ground zero for the blasts, and Sandra was in a corner room, watching it all happen. “It was pretty scary,” she said.

Sandra was one of the lucky ones that day. She and a friend had been offered seats right beside the racecourse by organizers, but they’d declined, preferring instead to monitor the race on television in their room. “I’d just started running,” Sandra explained, “and a lot of the marathoners were women that I liked and was I quite interested (in following them).”

“I watched the bombs go off and you’re feeling helpless, then all of a sudden the windows blew out of the building across the street so I left the window area and ran to the stairwell. That’s when they chased us back into our rooms and tried to calm everybody down.”

Soon, the Sukstorfs were reunited but they quickly were ordered to leave the hotel. They left essentially with their wallets and the clothes they were wearing, which in Simon’s case was his race attire. “We were basically refugees on the street,” Simon said.

With communications paralysed, the people closest to the scene were perhaps the poorest informed. The uncertainly, he recalled, compounded the horror of the situation. “When everybody evacuated the scene they dropped all their backpacks, so (police) had no way of knowing if there were more explosive devices in the area.”

As the day progressed, the “concern zone” kept expanding. The Sukstorfs made their way to another hotel and since it was cool, took refuge in the lobby. Before long, everyone who wasn’t a guest was asked to leave, so it was back to the sidewalk. Thinking they’d found a safe place to stop some time later, they ordered dinner in a restaurant. It was on the ground floor of a federal government building, however, and as they were eating, the waiter came by and told patrons they’d have to leave there, too.

“We were evacuated three times that day,” Simon said.

The couple with whom the Sukstorfs were staying got evacuated by a different door at the Lennox, and they’d gone in an opposite direction. They had secured lodging at a different hotel and, finally, there was a new place to crash for the night.

“It was on the other side of the city,” Simon said. “We walked through all kinds of checkpoints (to get there).”

A veteran runner — “I’ve had people call me Forrest Gump, because I’ve been running ever since I was a kid and I’ve never stopped” — Simon said his result that day was secondary, but finishing in the top third of a field of more than 20,000 is something of which he is nonetheless proud.

“You have to remember Boston gets the best runners,” he said. “The elite runners are world class, but you also get the top-end recreational runners from around the globe coming to this event. I’m in my fifties, so for me to place in the top third of a field like that, I was quite delighted.”

Sukstorf, from Paisley, Ont., began his military career at Royal Roads and came to RMC in 1982 to complete his engineering degree. A varsity soccer player at Roads, he suffered a career-ending knee injury there and at RMC cross-country skiing became the object of his athletic pursuits.

The colleges, he said, set him up well for his career. “I attribute a lot of my success to the foundation I got at both Royal Roads and RMC, in terms of leadership skills, interpersonal skills, generally the attributes required to be an effective officer in the military.”

Sukstorf, who has an MBA from the University of Ottawa, is presently assigned to the Canadian Forces College in Toronto, where he is deputy commandant and director of curriculum.

Sandra Hawes came to Kingston from Coniston, Ont., a small mining town outside Sudbury. Part of the third class of women admitted to RMC, she remembers her time at the college a little less fondly. “Those were the years when guys didn’t want us there,” she says. “Those were not fun years for women. We were not welcome there.”

Sandra sought her refuge in sports, and the friends and camaraderie that existed on the badminton court and on the tennis and curling teams. “So many of those friendships have endured through the years.”

She ended her intercollegiate career as the captain of the tennis team and skip of the curling team. “I avoided a lot of the stupidity that was directed against us by playing a lot of sports.”

Sukstorf earned a law degree from Dalhousie and her Masters in law at Queen’s. A navy commander and assistant judge advocate general based in Toronto, Sandra is the senior lawyer overseeing legal support to all Canadian Forces bases in Ontario. Like her husband, she was a successful competitive runner in elementary and high school, but soured on the activity while at RMC.

“There were very few women and we had to run with the gazelle men who were super fit,” she recalled. “I always felt like such a horrible runner and I struggled to keep up. I basically didn’t run because I wasn’t very good at it, didn’t like it, and really had an aversion to running ever since.

“It was about two and a half years ago and the kids were all going to university and I started running a little more seriously.”

Today’s race will be her sixth marathon, fulfilling a personal pledge to run Boston in the year she turns 50.

Simon and Sandra met at RMC, during a boardsailing course. “She looked great in a wet suit,” he said. They went their separate ways, started families with different partners, and later got together. Their “re-assembled” family, three sons and a daugher, are aged 22, 23, 24 and 25.

One son, an electronics technician aboard HMCS Calgary, has followed them into the military. The daughter is with the Canadian Border Service Agency, while the other two sons graduate this spring from business programs at Wilfrid Laurier and Ottawa.

“And they all have jobs,” Simon said, “so we’re delighted.” One day before the start of the 2014 Boston marathon; we have been advised that Simon will be wearing bib# 9944 and Sandra23944.

For those not familiar with Boston, the bib number is affiliated with the ranking out of approx 40,000 runners. Simon will be starting at the front of the second wave and Sandra will be placed mid way back in the 3rd wave.

We wish them and any other Ex cadets / former military colleges staff members the very best in the 2014 Boston marathon.

Next Issue, Claude will be catching up with Steve Molaski – former Redmen hockey star.