This past weekend, the staff of RMC’s Sandhurst Team made their final selections for the 2012 team. These selections were made following a grueling 3 1/2 hour training session on the afternoon of Saturday 21 Jan 2012, and then announced at an informal ceremony held in the RMC Cadet Mess the following day. This was the conclusion to a week long selection process that involved two training sessions per day over the course of five days. According to Captain Schamuhn, Head Coach of the team, no two days were alike, as each was designed to “reveal one or two character traits in the cadets who aspired to make the team.”

According to OCdt (III) Neppel, 25573, a former member of the team who is returning as a member of the coaching staff this year due to an injury, while there were a number of different factors that the coaching staff looked for over the course of the selection process, commitment was key. “We were looking for the commitment we needed,” said Neppel. OCdt (III) Ragetli, 25360, another former Sandhurst member who is returning for another year on the team, underscored those sentiments when he said, “While it is hard to tell at the last cut, because everyone is so good, above all Sandhurst is looking for people who don’t quit.”

With the selection process behind them, the team can now focus on the long road to the Sandhurst competition in April. OCdt Neppel explained to eVeritas that the next few months will be nonstop training for the team. “They will train twice a day, five days a week, with morning sessions focusing on physical fitness and the afternoon sessions focusing more on military skill sets.” Their training will cover a broad range of military skills, with a heavy emphasis on weapons training, and will involve two weekend trips to CFB Petawawa, one in February and one in March.

Once the team had been announced, Capt Schamuhn then gave each member of the team their Sandhurst pin. Out of the 35 cadets who began the selection process, only 15 made the team. However, according to OCdt (III) Kilpatrick, 25593, who ran last semester’s Sandhurst Intramurals and who helped run the selection process, “All of the cadets, whether they made the team or not, can be rightfully proud of what they have done.” The members of the 2012 RMC Sandhurst Team are:

Support staff for the 2012 Sandhurst Team are: 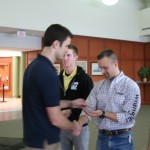 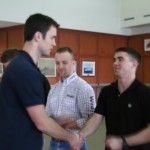 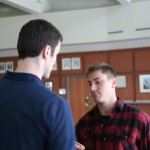 Captain Schamuhn presents Sandhurst pins to the members of the 2012 RMC Sandhurst Team.