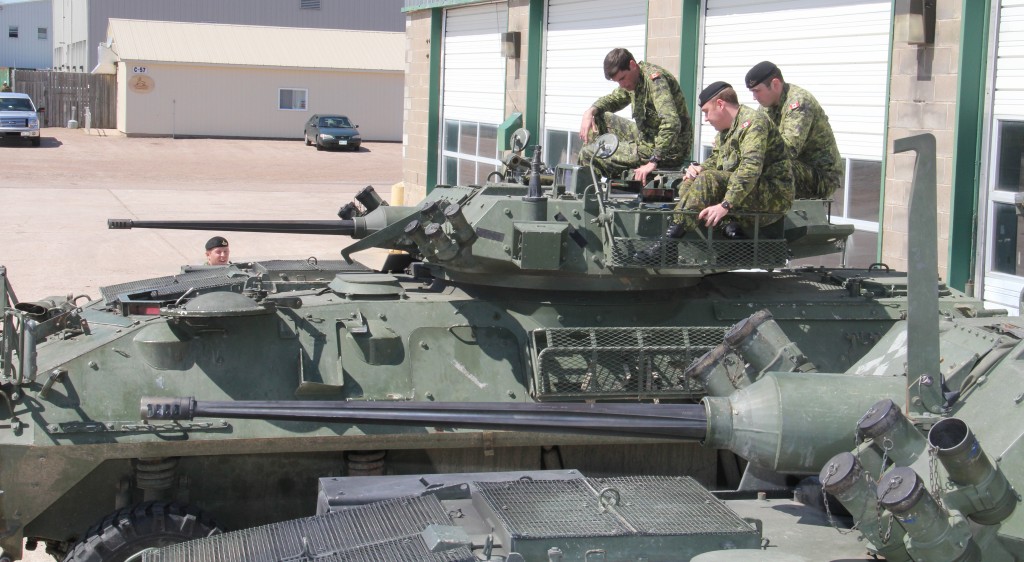 On Sunday the 27th of April 2014, 25 Armoured Officer Cadets (OCdts) from the Royal Military College of Canada travelled from Kingston to Garrison Petawawa to spend the week with A Squadron (Sqn), of the Royal Canadian Dragoons (RCD). The intent of the week was to provide a venue for the students to refresh their Armoured skills, in preparation of their summer training period. The RMC students conduct the vast majority of their military training in the summer months, which consequently means that they experience a substantial skill fade from year to year. The training plan implemented was focused on re-establishing their gunnery skills, operating the communication systems, battle procedure, administrative procedures, field craft, and exposure to Regimental life as a subaltern. 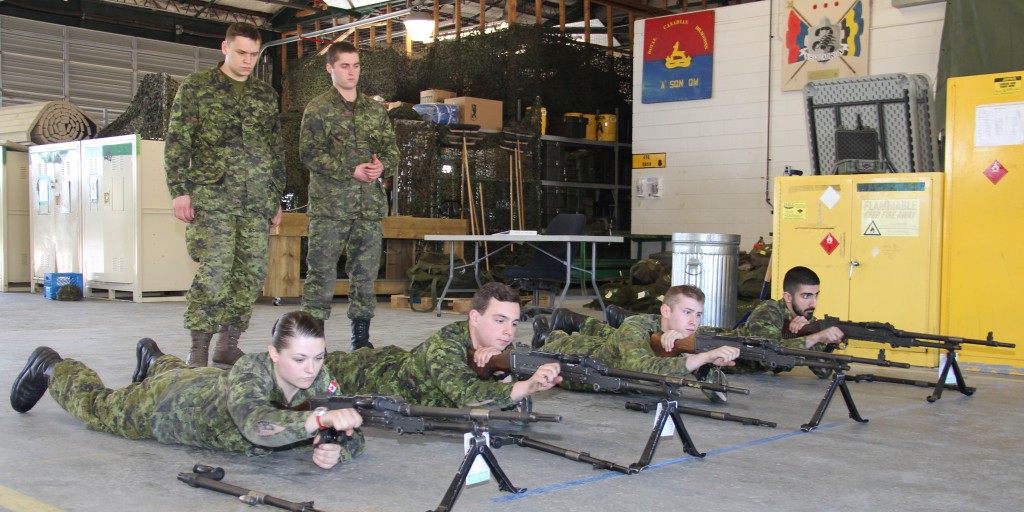 Early Monday morning, the RMC students were integrated into A Sqn to participate in Sqn PT, run by Cpl Tham and Cpl Shubert. The Cadets were pushed through an intense circuit training course and a 4km run. This exposed them to the expectations of morning PT at the Squadron level. Afterwards, the Cadets had a quick shower and were off to the Centurion Room at The RCD Regimental Headquarters for coffee, with the Officers of the Regiment. It was a great opportunity for the future Officers to socially interact with their superiors, and get an idea of what life is like outside of the College. LCol Atherton and CWO Mercer passed on their words of wisdom, and emphasized the principles, obligations, and expectations of subalterns of any Armoured Regiment in the Canadian Forces. Afterwards, Maj Kerckhoff (OC A) and MWO Nykorak (SSM A) took the students on a tour of the Regimental lines, to show students the operational side of the Regiment. The remainder of the day was spent training on the 25mm turret and small arms, under the watch of A Sqn NCOs.

Tuesday saw the Cadets once again incorporated into Regimental PT, only this time it was the Officers, and Ops WOs of the Regiment participating. The CO led the session, which was an 8km run around base with periodic stops to do some push ups, sit ups, and abs workouts. A gut check for some Cadets, as it’s the baseline fitness level the CO expects from his Officers. The rest of the day was spent at the LAV Barn, conducting practical classes on the comms systems, understanding the vehicle maintenance procedures, and the highpoint of the day, the 25mm Turret simulators. The system links a real LAV III or Coyote vehicle to a system of computers, and sensors to give students a safe simulation of firing on the Turret. For many of the Cadets, this was the first time they had interacted with NCMs in an environment that encouraged learning through open discussion. The calm atmosphere allowed the students to extract years of experience, and knowledge from their instructors. After the practical skill classes were complete, Maj Kerckhoff gave a lecture on the Armoured Corps history. The OC provided the students with a fundamental understanding of how the Corps was formed, where they deployed throughout our history, the current disposition of the Regular Force, and the future of the Corps. To add to their baseline of knowledge Cpl Griffis guided them on a tour of the RCD museum and archives, highlighting the Dragoons distinctive history.

Wednesday didn’t let up on the PT side as the Cadets joined A Sqn on an early morning ruck march through the base. After another quick coffee, the Cadets had a theory review on battle procedure, taught by Lt Smith, and Sgt Erickson. An essential component of their profession is to pass on quick, clear, concise orders to their subordinates, which was covered in this class. After lunch, the Cadets used the Small Arms Trainers (SATs), practicing the PWT 1 and 2 on the C7 rifle. LCol Andrews (Commmadant of the Armour School) visited with the Cadets after the training. He discussed in length the Armour School upcoming training schedule, and the new vehicles coming into the Corps. After another long day of activities the Cadets were invited back to the Centurion Room for “Beer Call”: another social event that remains a staple of Regimental life. 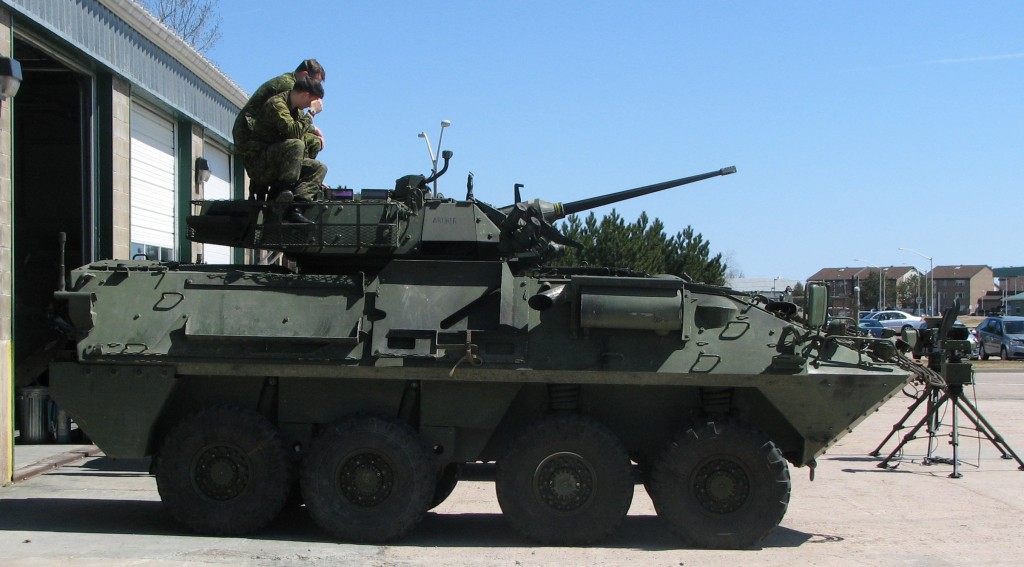 Thursday was the final day of training, and was by far the highlight of the week for the Cadets, as they deployed with the Sqn into the Training area. Sgt Landry, Sgt Poppe, and MCpl Monaghan provided an Observation Post (OP) demo for the Cadets, providing a detailed explanation on the purpose and functions of an OP. Such a thoroughly planned example should give the Cadets a solid basis for them to use in Gagetown during their training. The rest of the day was used to practice dismounted patrolling and mounted patrol movement throughout the Petawawa training area. In the late afternoon, the Sqn moved back to the hangar for a Service Support brief with MWO Nykorak, with some burgers from the Sqn canteen. The SSM gave a detailed lecture on the importance of the Echelon system to the fighting Troops, the methods of resupply, and real-life examples of how the Echelon affected the battle.

On Friday morning, the Cadets handed in their kit and were back on the bus to Kingston. The week was successful, as the Regiment provided a great venue for the Cadets to refresh their skills ahead of their summer training period. It was excellent opportunity for the Regiment to meet the future of the Corps, and help develop them into sound leaders. The Cadets learned valuable lessons from the training, and will be better prepared for their future employment within the Armour Corps.