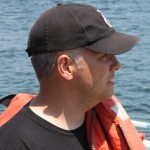 The RMC Yacht Club recently hosted a presentation for a variety of Kingston area sailing enthusiasts that was organized by our Vice-Commodore, Todd Ward. It was a well delivered explanation by a representative of Environment Canada regarding weather on Lake Ontario, and the effect of certain meteorological phenomena on wind conditions. I was able to introduce myself to many notable members of the Kingston sailing community as the RMCCYC’s Commodore, and during an intermission I spoke with one gentleman at length with respect to several items of historical interest at RMC. We discussed the decorations and regiment listings in Currie Hall and the plaque on the outside of the building denoting the place where the design for the Canadian flag was first suggested. Presently I was also able to boast that I am the Commodore of the yacht club that occupies the bay which the American Navy once feared to approach. The “Sacking of York” during the War of 1812 happened not in part because the American forces feared to approach the mighty fleet at Navy Bay; Toronto was the soft target as compared to the Kingston defenses which were supported by the Kingston Royal Navy Dockyard. Today our Martin 242 and 420’s continue the tradition of Canadian naval power in Navy Bay started those many years ago. By the time Canada became a country Navy Bay had been relegated to the status of a historical landmark rather than a seat of naval power.

In my last article I included the oldest surviving proof of sailing at RMC, being the image of the sailboats behind the Stone Frigate in 1885. Though the 1920 edition of the RMC Review discusses the presence of sailing as an activity for Cadets, racing as an inter-Company competition began in 1935. Ex-Cadet associations had donated seven dinghies, and racing began amongst Cadets in six of these, with one being left a spare. E Company took the championship that year, and individuals were further permitted to compete in two classes selected from amongst the best that had competed for the Cadet Companies. Spurred on by this first year of dinghy sailing, RMC pressed to bring sailing to the wider Canadian collegiate community. On October 2nd of 1937 the first ever intercollegiate regatta was created and run at the Royal Military College, and featured teams from RMC, the University of Toronto, Queen’s, and McGill, and under the guidance of Lt.-Col. L.F. Grant, the RMC team was victorious. The Captain of the “Dinghy Team,” a Cadet named G.H. Spencer, led his fellow sailors to win the first C.I.D.R.A. championship – an organization that in later years would become known as C.I.C.S.A., which is the modern intercollegiate competitive sailing association that Canadian universities currently compete through. Lt.-Col. Grant donated a trophy for the occasion featuring a ship’s bell, and RMC had the distinction of being the first Canadian university whose name was inscribed on it.

Captions: The winning 1937 RMC Dinghy Team, seated in the front row left side is Cadet G.H. Spencer, front row second from the right is Lt.-Col. L.F. Grant – Image from the RMC Review; the Grant Trophy

Spurred on by both the success of the 1937 win and no doubt the urging of the teams benefactor, Lt.-Col Grant, 1938 saw two significant sailing regattas take place at RMC. The first took place on September 14th, and was the first International Intercollegiate Dinghy Regatta, featuring teams from RMC, M.I.T., Princeton, Brown, Queen’s, Williams, and the U.S. Naval Academy. RMC provided the venue and the boats, but was unable to furnish a victory. M.I.T. beat out the Princeton team in the final race, with RMC taking third. When the next C.I.D.R.A. championship was held on October 8th, the RMC team was also defeated by McGill. By this point the prior skipper who had taken the title in 1937, G.H. Spencer, was gone, and it would seem that without his expertise the team could no longer keep up with other increasingly competitive collegiate teams. In spite of the losses, Lt.-Col Grant was sighted several times for his extraordinary effort in bringing these competitions together. Though 1937 was the only year of that era in which RMC took the title, it should not go without notice that Lt.-Col Grant had created two important firsts in competitive sailing, both domestic and international intercollegiate competitive regattas.

Anyone familiar with critical thinking has heard the expression “correlation does not necessarily indicate causation.” This may be true, but RMC sailing history shows at least one instance when one would imagine that there was some sort of connection beyond the limits of logic. In January of 1962, G.H. Spencer, the sailing team captain that led his team to the victory in the first C.I.D.R.A. Championships in 1937, would return to RMC as a Brigadier and Commandant of College. Under the leadership of the team’s coach, Mr W. Rigney, a Cadet named Rod Wreford was able to bring the Lt.-Col. L.F. Grant Trophy back to RMC for the first time since Brigadier Spencer’s departure prior to the 1938 season. Comparing the picture of Brigadier Spencer with that of gentleman Cadet Spencer 23 years previous, it is apparent that sailors are able to avoid any visible signs of aging (or at least I sincerely hope that is the case).

One cannot underestimate the effect of personality in driving the success of sailing at RMC. The wind drives our boats, will drives our sailors, and behind them the patrons of the College drive the facilitation of Cadets’ sailing successes. Reading the RMC Review with respect to the sailing activities of the 30’s and 40’s, there is an odd nom de plume, Four Winds, that often pops up in sailing related stories or yearbook entries. Though it can’t be confirmed conclusively, Four Winds was the name of the boat sailed by Lt.-Col. L.F. Grant, and given his involvement with sailing at the College, it is likely that he had decided to substitute his boat’s moniker for his own. Known as “Leary” to many of his students, Lt.-Col. L.F. Grant was himself an alumnus of the Royal Military College (College number 599) who attended RMC from 1904 to 1908. “Leary” had learned to sail in 1897, and by his enrollment in the College in 1904 he had already competed in a L.Y.R.A. sailing regatta in Toronto. Though he eventually left the military to pursue education as an engineer, he returned to Kingston in 1920, and by 1931 was serving as the commodore of the Kingston Yacht Club. Through his long sailing career he managed to win the Freeman, Baldwin, and Sodus Cups and finally the Lake Ontario Trophy in 1954. It was Grant that was responsible for bringing the Admiralty and 14’ International dinghies, the “C” boats, and the Bluenose fleets to RMC. His effect on sport sailing on Lake Ontario and his effect on the Kingston community was not, however, limited to the College or his own competitive record. Amongst other projects, he worked with George Cuthbertson, one of the founders of C&C Yachts, to develop a handicapping system in which different boat types could compete against each other in what was an early version of the modern PHRF ratings. He also wrote the history of Lake Yachting Racing Association (LYRA) between the years 1884-1962, a publication still available on the LYRA website.

At the risk of hubris, it is gratifying to reimagine my presentation-night conversation in light of the many important things that have taken place in relation to sailing at RMC. We are a small yacht club with few resources, but our history is great, and perhaps deserving of deeper respect than many not acquainted with our history might assume. RMC is the place where both Canadian and North-American intercollegiate competitive sailing started. We can document our Cadets competing at the provincial level going back as far as 1904, and some of those same Cadets had an influence on the success of RMC and Lake Ontario sailing that would reverberate through much of the twentieth century. Our effect on history has been disproportionate to our size. This history also shows that when sailing has the support of the College establishment, we are able to train our Cadets to the point where they can even succeed against other scholastic institutions who have invested heavily in the success of their teams over the years. The dignity afforded to our club by this history is significant, and the alumni of Canadian military collegiate sailing should wear it with pride.

Stories, anecdotes, corrections, or digitized media can be emailed to the Club at RMCCYC@rmc.ca