This is the fourth installment of our seven part series on The History of the Royal Military College of Canada, by #47 LCol Ernest F. Wurtele, VD. LCol Wurtele graduated RMC in 1882, served as honourary secretary-treasurer of the RMC Club from 1892 to 1913, was the associate editor of the RMC Review, for ex-cadet news, from 1926 to 1936, and was the first honourary member of the RMC Club. The History of the Royal Military College of Canada, by LCol E.F. Wurtele

The needs of the college soon outgrew the buildings that answered the purposes of its opening years. Since the ”Stone Frigate” was fitted up for educational purposes, there have been erected on the college grounds an educational building, a hospital, a gymnasium (a building formerly used as a blacksmith shop by the Imperial Government at first served this purpose), Staff Adjutant’s quarters, a new dormitory building, gun shed, model shed, stables, etc. All this cost money, and the average Canadian who gave any thought to the matter considered the expenditure entirely out of proportion to the results. In the decade or so preceding 1896 the institution had been the subject of violent attack in Parliament and by a section of the Press. It was, indeed, a political football. But it was well worth the cost.

The majority of the graduates of the college do not take up soldiering as a profession. Seven commissions in the Imperial service are offered annually; viz., one each in the Engineers, Royal Artillery, Cavalry, Infantry, and Indian Army, and two in the Army Service Corps. Of these the commissions in the Royal Engineers, Royal Artillery, and Indian Army are as a rule taken, but those in the other branches are not always accepted. The commissions in the Canadian Permanent Force are of course open to the graduates of the college, and the Canadian Artillery and Engineers are officered almost entirely by ex-cadets.

When there has been any call for their services, as in the case of the North-West Rebellion, the South African War, and the Great World War, the men of the Royal Military College have promptly reported for duty. In the early days of the college the only military obligation on any ex-cadet was to join the Reserve of Officers, but “within recent years it has been laid down that ex-cadets not entering the Regular Forces, Imperial or Permanent, shall be gazetted to the Active Militia for three years. In addition to 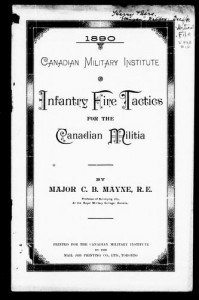 military employment the Canadian Government offers annually to graduates a certain number of appointments in the public service of the Dominion. But the graduates of theR.M.C. are employed in a variety of ways. They are to be found in the Imperial Army, the Canadian Permanent Force, and the North-West Mounted Police, in civil engineering, business, law, medicine, farming, and land surveying. In their ranks are several chartered accountants and architects, and some have entered the Church.

In 1895, when the attacks on the college were particularly virulent, Major C. B. Mayne, who had spent seven of the best years of his life as a professor within its walls, wrote a strong defence of it. By its means, he pointed out, ” there was established a latent force, the necessity of the Canadian military system,” a standing army being out of the question. According to Major Mayne the physical training could not be equalled anywhere else in Canada, and no institution could point to a higher moral standard. *’ Honour and its subdivisions of truth, duty, and valour are ever upheld to the cadets.” In reckoning up its value it must, he added, be recognized that its graduates in civil life are necessarily highly important elements in Canada’s defensive power.While the college has been of great benefit to the country, it has been hampered by being under political control, and the fullest use has not been made of its graduates for national service. It is true that the Militia Regulations provide that permanent militia commissions will be given solely to the graduates of the Royal Military College, but for the first twenty years of the life of the college the Militia Department persistently ignored its own order and appointed officers to the Permanent Force without qualification or fitness. Political interference and favouritism have forced into private life many of its ablest graduates. But the Royal Military College of Canada is one of the greatest assets the Dominion possesses.