Lillian Rose Price (born April 27th 2011) was baptized by Padre Heather Smith at the RMC Protestant Chapel on January 15th 2012. Parents, 22558 Sandra Price (nee Reibin) and 22702 Nathan Price, have both worked at RMC since 2008. The service was very special in that the Christening Bell currently at the chapel is the same one that was at Royal Roads Military College before it closed. It is a naval tradition to Baptize children with naval bells and to engrave their names on the bell afterwards. Sandra Price’s father, CWO (Ret’d) Donald Reibin, was a Drill Instructor at Royal Roads from 1977 to 1980. Both Sandra and her sister Captain Heather Reibin (23234 class of 2005) were christened in the same bell in 1979 and 1982. Sandra and Nathan’s first daughter, Isla, was baptised in the bell in December 2009 and her name has been added. They hope to get Lillian’s name engraved on the bell this spring. A special thank you to PO1 James Levesque, C Div WO, who volunteered his time to attend the service in full uniform and piped while the baptismal water was poured off the pier back into the lake.

More photos from the big day: 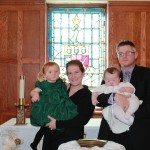 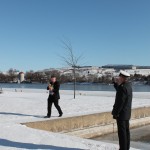 A Veteran, Regardless of Age

From Peacekeeping to Partisan Policing?

“I have no doubt in my mind that there are Libyans alive today who would not be if this ship and crew had not been here,”

“Like all members of the Canadian Forces, the men and women of HMCS Charlottetown are committed to protecting Canadians’ safety and security, at home and abroad,”