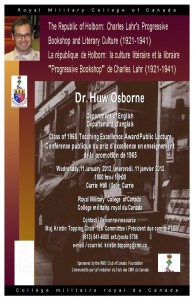 The subject of Dr. Osborne’s lecture will be: The Republic of Holborn: The Progressive Bookshop and Literary Culture (1921-1941).

Sponsored by the RMC Club / Foundation

Hello Bill, people have accused me of being stuck in the past but the article on the PPT disturbed me a bit in that looking at the stats presented indicates a Male 500 is not the same as a Female 500.

I thought the college had weeded out that sexism. The academics are more straight forward. And then the reporter asked the lady cadet how she felt about being beaten by only two cadets who happened to be IVyr? I think the reporter was trying to emphasize the first yr vs fourth year accomplishment but it only emphasized the male/female performance standards difference, for me anyway.

It seems to me like running a co-ed race like the Wing Harriers and after crossing the finish line first, to be told that you didn’t win because someone a few 100m behind you actually won!

In theory, after commissioning, all new officers will be ‘running’ on a level playing field so why not start during college life. Not being female I do not appreciate the concern they may have being assessed by a lower standard.

‘Glad we didn’t have to deal with that back in the early ’70s.