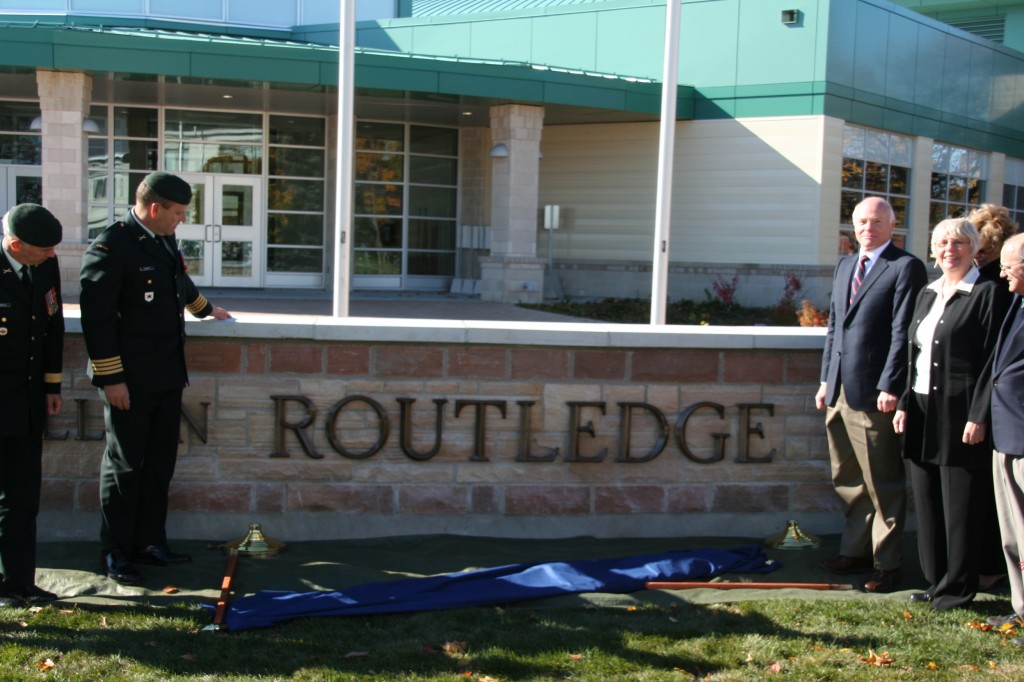 Over 300 family and friends; current members and retired members of the The Communications and Electronics Branch, attended the unveiling of the Routedlege Hall (RH)  last Friday (22 Oct) at CFB Kingston.

The ceremony was an impressive one.

Ron Jr. speaking on behalf of the family. “The thoughts of my family, amount to this. It is not only a great honour for my father but it seems uniquely appropriate that this facility has been built for the use and enjoyment of all ranks. In addition, the inscription “Quiet Courage” is so apt in describing you men and women in uniform and, I might add, your families, who are called upon to make great sacrifices in the service of our country and humanity in general.And a final thought, a lesson for all of us, is that my father proved many times over that ordinary people, when called upon, can be capable of extraordinary acts.”

The remembrance of Ronald Routledge, through the dedication of a building in his honour at the Home Station of Signals and School of Communications and Electronics, would be a true statement to the legacy of this exceptional Canadian, his courage and devotion to communications in the face of danger. – the very value at the core of military signalling. His distinguished service to Canada was not only exceptionally high level but also has become a source of inspiration for soldiers and communicators today and for generations to come. Though not a renowned battle commander from a well known campaign, the heroism of Ron Routledge and the Routledge name represent the “quiet courage” needed by every soldier regardless of the time, circumstances or conflict in which Canadians may be asked to serve.

Ronald Routledge, from Regina, enrolled with the Regina Rifles in 1934, transferred to 18th Field Battery RCA and then the Royal Canadian Corps of Signals in 1940. In October 1941, as Second-in-Command Radio Troop, Corporal Routledge was dispatched to Hong Kong to provide brigade headquarters communications as part of the 2000-strong Canadian contingent. He was promoted Sergeant in November and then, following the surprise Japanese offensive in December, was taken prisoner along with many other Canadians on Christmas day. He and his fellow prisoners were deprived of the basic necessities of food and medical treatment and experienced deplorable living conditions and harsh treatment. Many Canadians died during the three and a half year of captivity.

(Photo caption:  Sgt Ron Routledge aboard a ship on his way from Hong Kong to a hospital in Manila in 1945.)

His DCM citation reads: “Sgt Routledge displayed unusual devotion to duty and conspicuous bravery while in special service during his period of captivity in the hands of the Japanese.” In the truest spirit of Signals, a communication network was established between the Sham sShui pPo POW Camp and British intelligence at Waichow through the medium of Chinese ration truck drivers. Without hesitation and fully aware of the dangers involved, Sgt Routledge joined the ration party as the contact for the passage of messages to Chungking agents under the eyes of the Japanese guards. The risk was enormous, but this channel of communication resulted in many lives being saved through the supply of much needed medicine and exchange of valuable information. When the message system was discovered, Sgt Routledge was brutally beaten, starved and tortured, yet showed remarkable courage and fortitude in refusing to divulge any information that would jeopardize his comrades. This kind of courage have been describes as “quiet courage” in which one can permit one’s own destruction and hold on to a decision that will result in certain suffering or death. He was sentenced to court martial for espionage by the Japanese and confined to Stanley Prison until his return to Hong Kong in 1945. Awarderd the DCM for his actions, it again cites “The resolute courage of this NCO in spite of indescribable suffering and his devotion to duty provide an example of the highest tradition in the service.” Indeed, Ron Routledge’s heroism left a legacy of what military communicating is all about, sacrificing his own well being to maintain communications and protect his fellow soldiers.

He recovered his health and continued service the Canadian Army, at the School of Signals and elsewhere, until his retirement in 1965 at the rank of Captain. He was later called out as a Major at the Vernon Cadet Camp, completing 33 years in Canada’s service. Ron Routledge was a soldier, who, like many others, has left a remarkable legacy within Signals and for his nation. However, his story has particular relevance as it exemplifies the strength of character and devotion to duty needed today by soldiers in the face of different types of enemies. The conflict may differ, but the principles of perseverance and dedication remain the same. Ron Routledge was a quiet hero in a somewhat forgotten chapter of our military heritage. The award of his DCM is the one and only DCM awarded to a member of the RCCS during WW2.