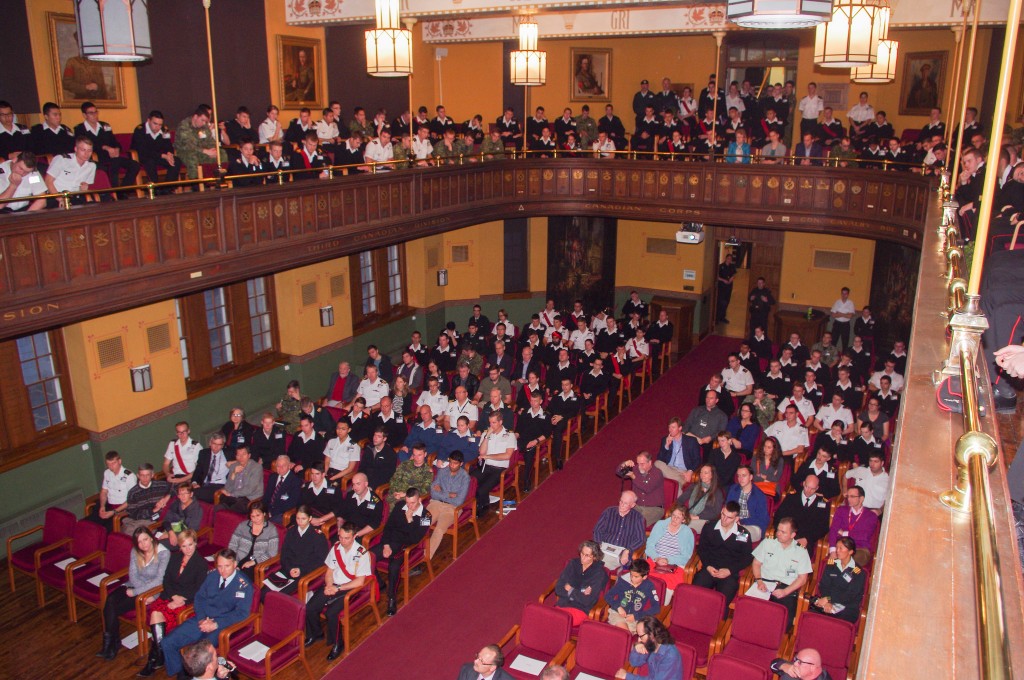 “Having Chris Hadfield speak at the Young Memorial Lecture on Leadership in Currie Hall packed with Cadets, Faculty and Staff was truly a wonderful and inspirational engagement opportunity.”

The John Douglas Young Memorial Lecture was first established in 1985 through the generosity of the Young Family, in particular College No. 2552 William H. Young and his brother College No. 2581 A.B. (Ben) Young, in association with the Royal Military Colleges Club of Canada Foundation.

The lecture and the corresponding visit are held in honor of No. 2360 Major J.D. Young who graduated from the College with distinction in 1937. 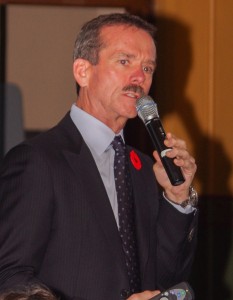 Currie Hall was full of cadets, officers, and other guests awaiting the arrival of 13738 Chris Hadfield (Class of 1982) to give his presentation. Mr. Hadfield was introduced by RMCC Principal Dr. Kowal, the Commandant was also present along with most of the college leadership. Mr. Hadfield was greeted by a room full of applause when he arrived. He then proceeded with his presentation.

He was born in Sarnia, and raised in Milton, Ontaro began by telling the room the story of how he wanted to be an astronaut since he was a child. This was accompanied by a picture on the projector of his childhood self in a cardboard space ship. The main point of his presentation was that if you have a dream you should set that as your goal, but you should celebrate small accomplishments on the way to that goal. As an example of smaller accomplishments Mr. Hadfield told the audience about how he learned twelve words of Russian in a weekend and how that put him closer to living his dream. Mr. Hadfield warned against setting your goals as a measure of success, saying that if you don’t achieve those goals that you should not consider yourself a failure.

Before speaking about space travel the former RCAF CF-18 pilot explained how throughout history humans would send probes before exploring a new area. He gave the example of Franklin’s lost expedition in the nineteenth century. They were trying to discover a shorter route to the orient and became stuck in the Northwest Passage where all the crew eventually perished. Mr. Hadfield related this to space exploration by saying that Franklin navigated to the best of his ability with the technology available and how with modern technology humanity was able to explore the entire surface of the planet and finally outside of the planet.

The RMCC Mechanical Engineer graduate then explained the experience of space travel. He described the crushing weight of lift off, the physical toll on the body of wearing a spacesuit and he showed the audience pictures from space. The audience was told the story of how he and his crew were able to respond to a coolant leak on the Mir space station. When the leak was discovered Mr. Hadfield had to send one of his crew on a spacewalk in order to fix it. They were able to fix the leak and there was minimal damage done. Mr. Hadfield explained to the audience the process of re-entering atmosphere in a Soyuz capsule. The audience responded with laughter as he explained the “soft landing” boosters which sent the capsule on a tumbling crash to the earth. 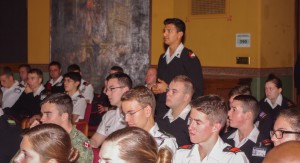 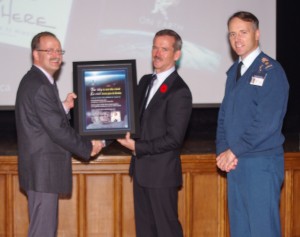 The presentation ended with a short Q&A session in which Mr. Hadfield explained more about his life at both RRMC & RMC and his military career. He explained that when he arrived at RMCC from RRMC he chose to pursue an Engineering degree as he found math difficult and wanted to push himself further. At the close of the presentation the Officer of the Order of Canada (2014) was presented a plaque by the Principal and left the building with the Commandant.