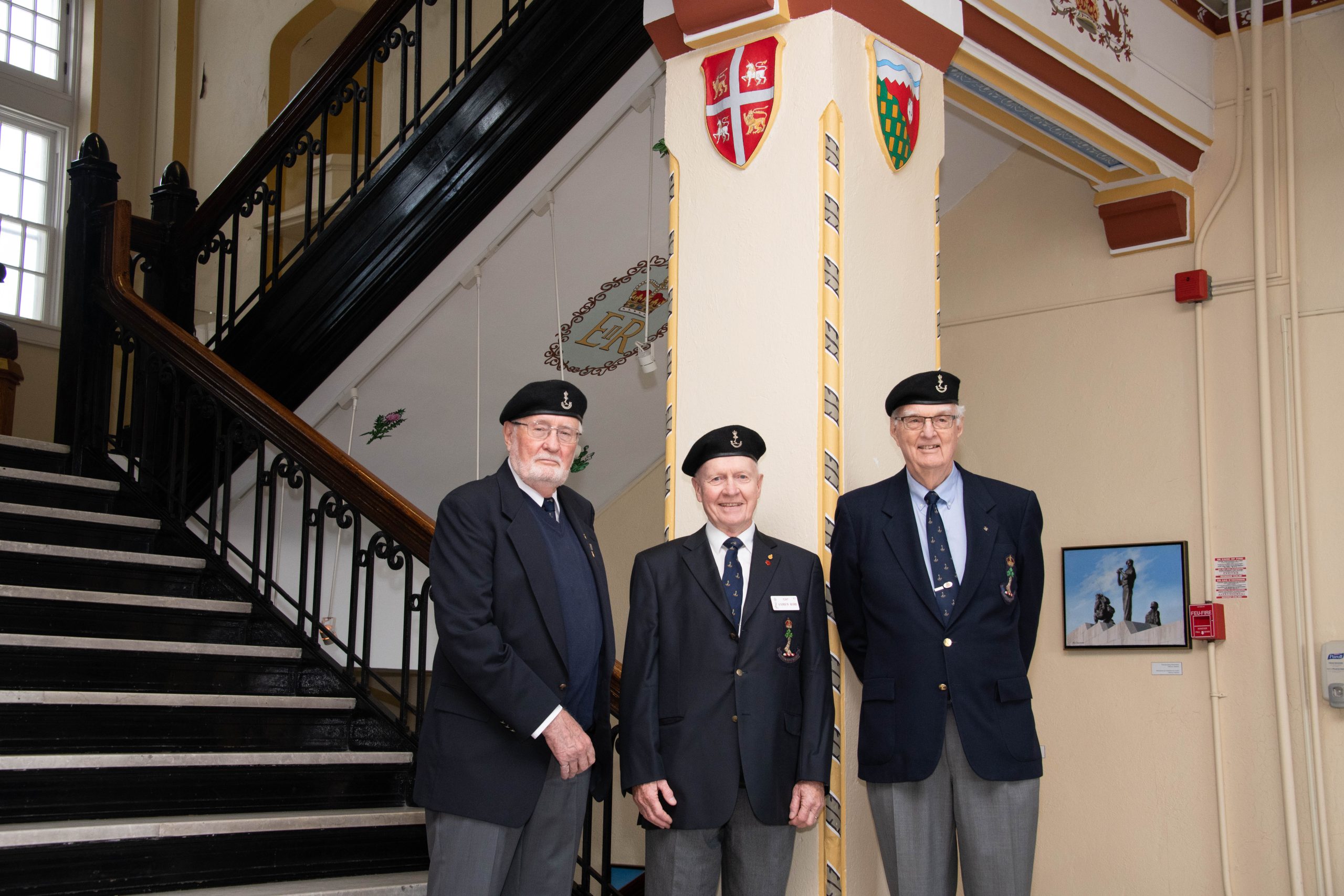 On Friday, 7 October a small group gathered in Currie Building to recognize the architectural painting added to the walls, ceilings and columns in the foyer, stairways and Baronial Hall of Currie Building. The painting was intended, by the architect, to be included in the building when it was built in 1922 but the surfaces remained bare from then until recently. The painting was completed in 2017 by art conservator, Alex Gabov and his assistants.

The Commandant, Commodore José Kurtz, spoke to the group representing the Class of 1961, the RMC Alumni Association and the College. She thanked the class for undertaking the project and the lasting visual effect it will have on this important building. Members of the Class of 1961 underwrote the cost of the painting over a period of about five years. 5207 Andrew Robb responded on behalf of the class. The work was done under the supervision of the Curator of the RMC Museum at the time, the late 8057 Ross McKenzie (Class of 1970), and the Alumni Association.

During the ceremony, the Class of 1961 also presented an original painting to the College. The art work, “Just Passing By”, depicts Colonel H13738 Chris Hadfield (Class of 1982) flying over RMC, Fort Henry and the city of Kingston. The work was painted by 5573 Layne Larsen of the Class of 1962. The Commandant accepted the painting with thanks on behalf of the College. The painting was acquired from the Montreal Aviation Museum by 5188 John Lawson for the class. 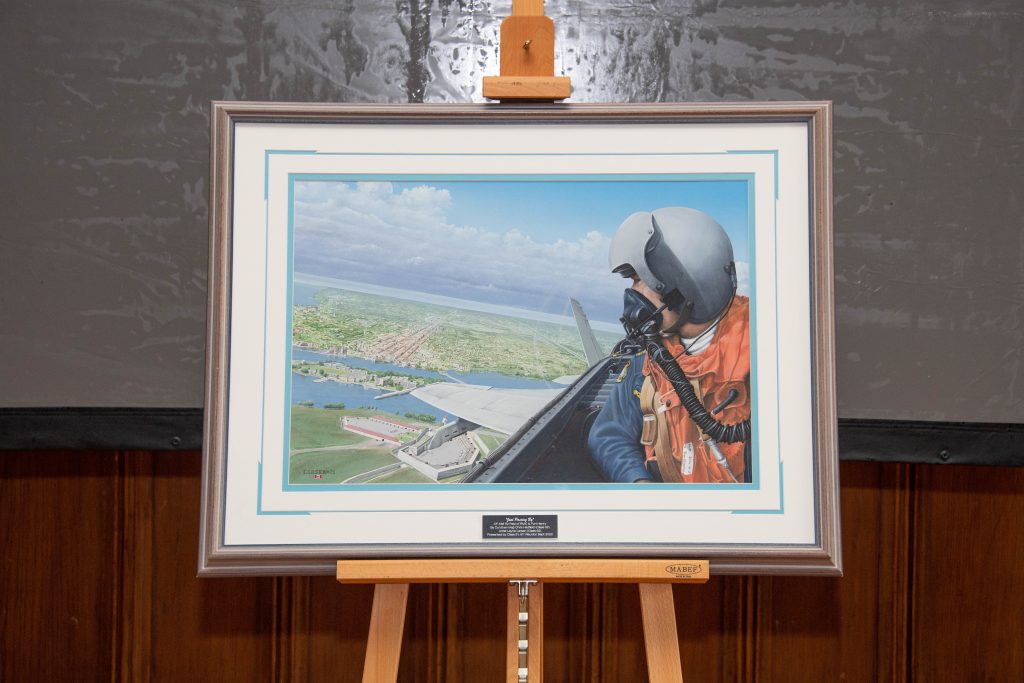 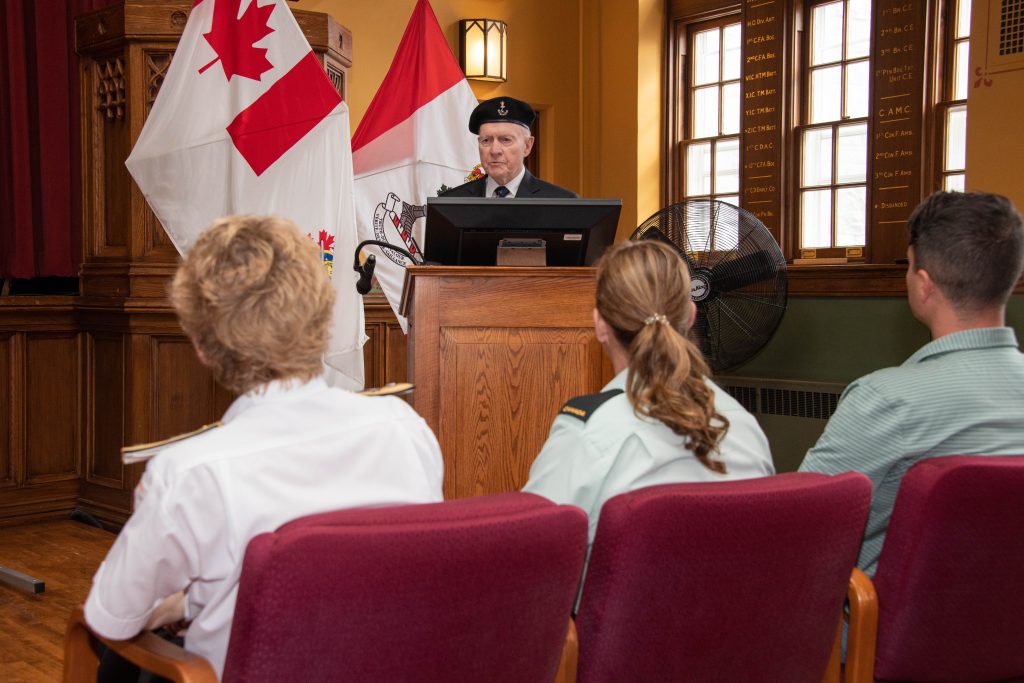 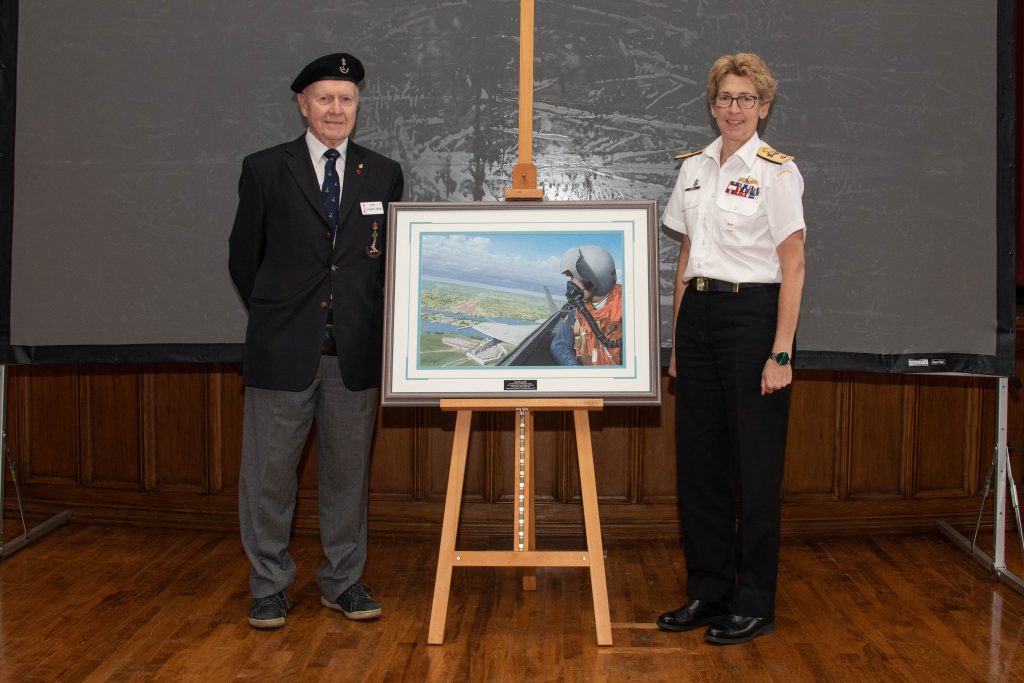 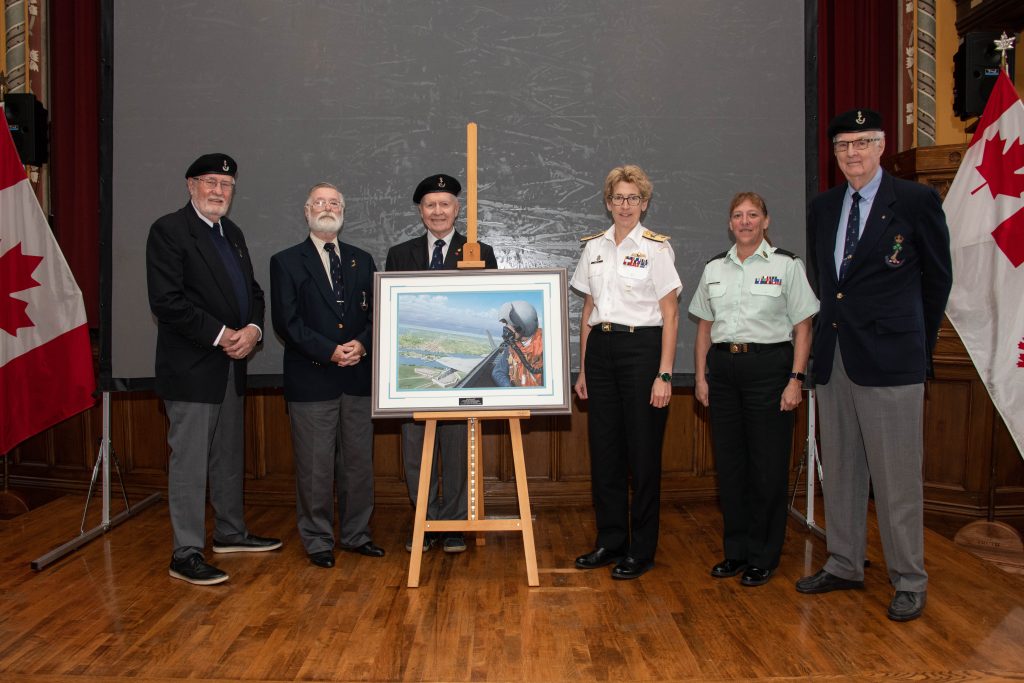 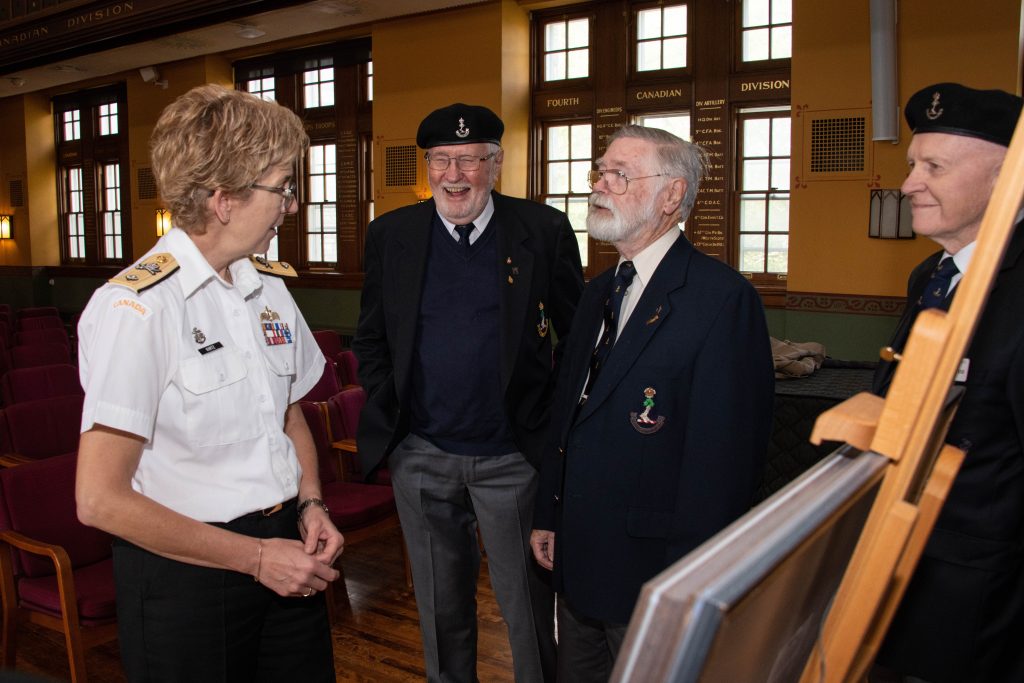 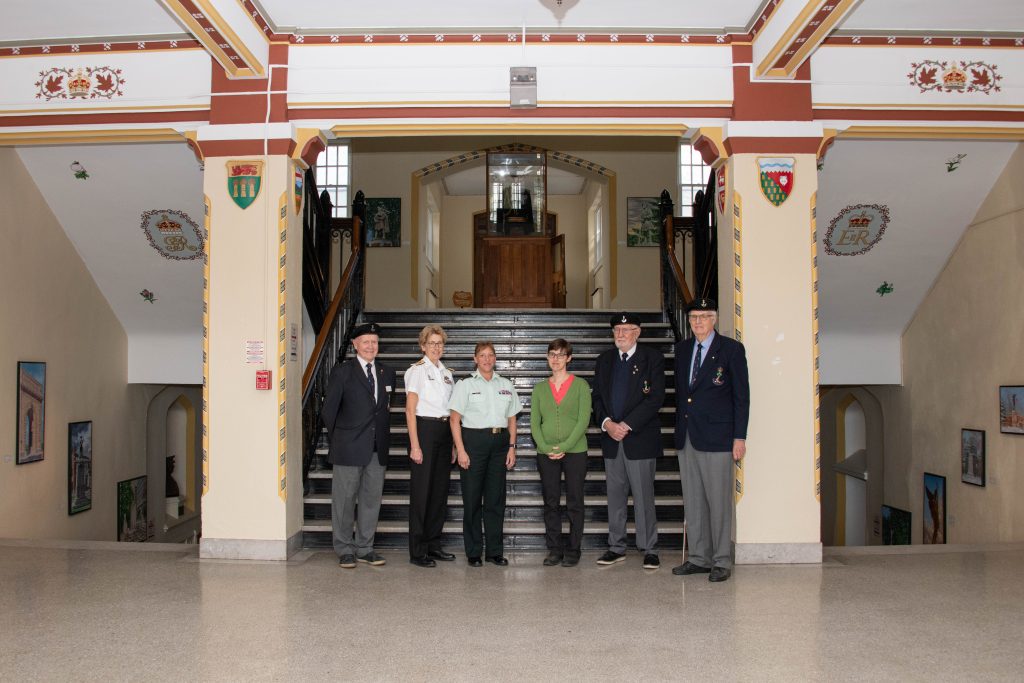 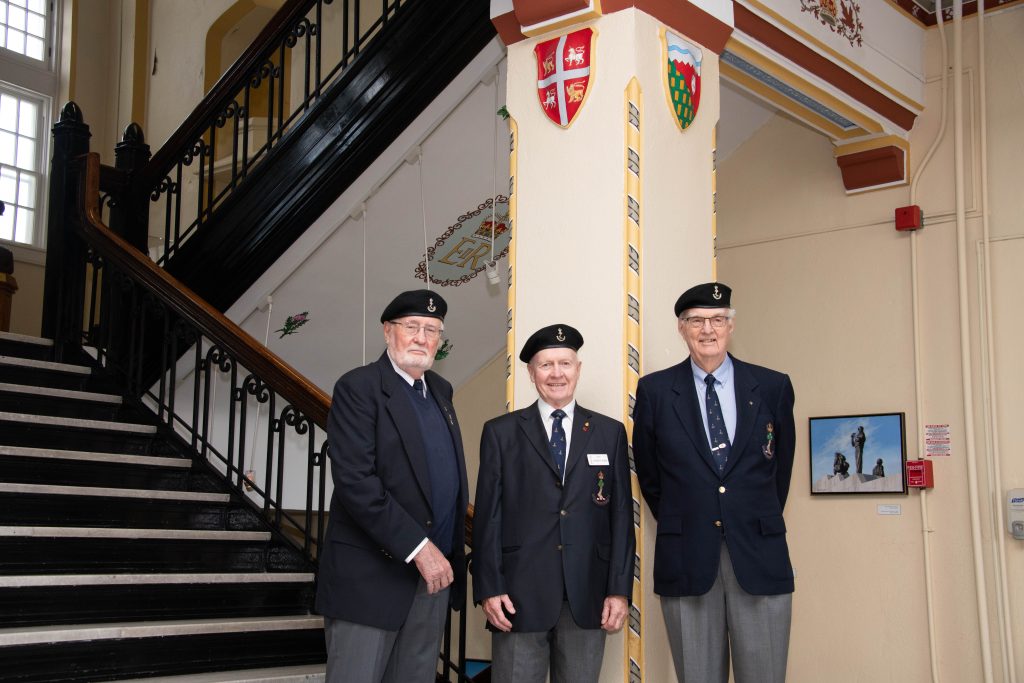 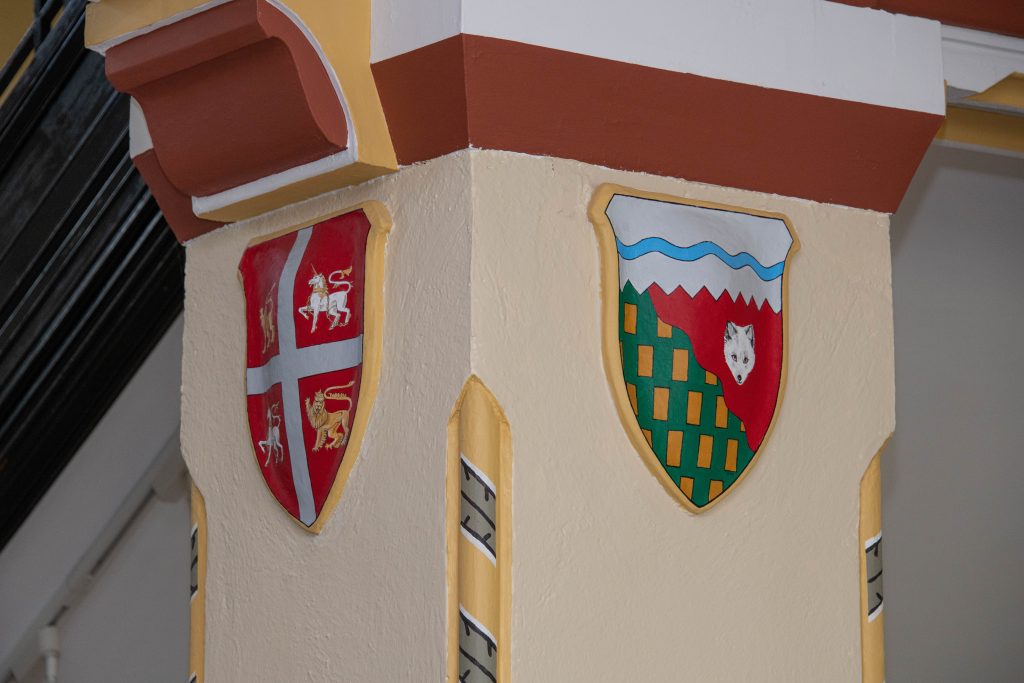 Below is a copy of the Commandant’s speech:

I begin by acknowledging that we are gathered on the traditional territory of the Anishinaabeg, Haudenosaunee, and Huron-Wendat Peoples,

… and that we are here, in this historical hall, beautifully decorated with the purpose and atmosphere to inspire RMC cadets and visitors with pride in Canada and its military traditions, including those who made up the Canadian Corps.

I would be remiss if I didn’t mention that the Class of 1961, of which some members are here with us today, funded nearly $180,000 dollars to finance the architectural painting in the various levels of the Currie Building, which members’ can truly be proud of their contribution.

The original painting of Colonel Chris Hatfield, flying over RMC as then Commander of the International Space Station and first Canadian astronaut to walk in space, is donated to RMC today.

We are so grateful for that and on behalf of the staff, students and faculty of RMC, I thank ex-cadet John Lawson for this original painting.

Unfortunately, John couldn’t be here with us today, but we will welcome him in the near future to see the painting affixed to the wall of the Currie Building.

I also thank Andrew Robb, Class Secretary, and all those of you involved in this project.