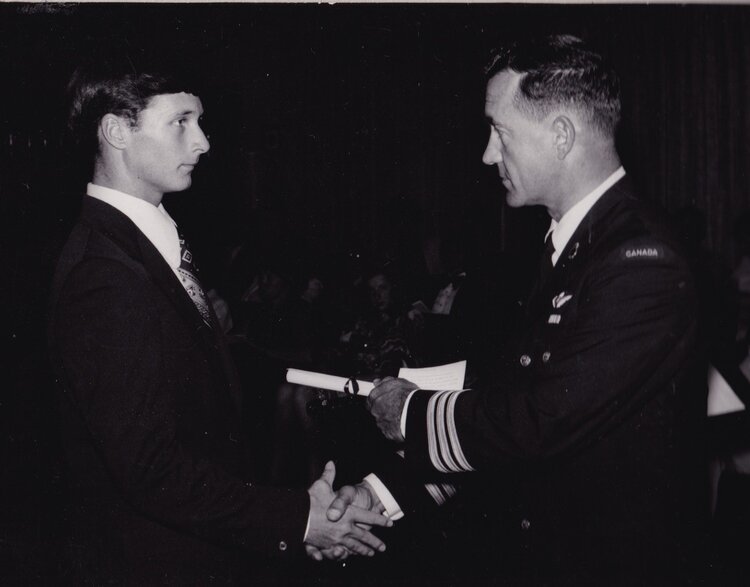 With Thanks to 12287 Richard Greenwood

Editor’s Note: Following the publication of several great stories about RRMC written by 12137 Scotty Mills, 12248 Craig Wood recalled 12287 Richard Greenwood telling him a wonderful story about how he and his identical twin brother Nigel had ended up at Roads, Nigel via a much more circuitous route.

As Richard tells it …

As we are more physically distanced in these circumstances, I am taken to thinking of past memories. Monika and I live at the west end of the lagoon in front of Royal Roads, and I even have a study nook in the Castle (in a fit of madness a few years ago I embarked on a PhD in Mech Eng through UBC) so I often think of the good times there … and they were, mostly, good times (often, great times!).

The generation of recent College dits/memories among the Class of ’79 helped remind classmates of the story about how Nigel had ended up starting RRMC 2 weeks late.

As background, Nigel had had mononucleosis and tonsillitis when we went to the CF Recruiting Centre in Vancouver for the 07 Aug 75 enrolment ceremony so they refused to take him! To say that this was a shocking outcome would be a serious understatement … even after he got over it, the doctors advised that it might take 6 weeks for the bug to be out of Nigel’s bloodstream to get a clean bill of health … we had received our acceptance letters in February and there was no Plan B …

Two weeks after the start of Rook Term at RRMC, the Commandant Capt(N) R.C.K Peers phoned our home in Powell River, B.C. and said “Mrs Greenwood, please send your other twin down here to Royal Roads … don’t send him anywhere near the Recruiting Office … we’ll sort out the paperwork”. Of course we rooks were 2 weeks up the learning curve and knew the knife & fork drill, but Nigel having parachuted into the midst of it all was quite rattled and during the first two meals in the cadet dining hall had managed to knock two side plates off the table and onto the floor. This inspired his CFL from Fraser Flight, Gene Joelson, to stand up and holler down the length of the dining hall to the CFL of Mackenzie Flight, Don Olechowski – “Hey Oly! I’ll trade you my Greenwood for your Greenwood!”

Nigel, for his part, notes that the funniest thing is “after Richard departed to RMC for his final two years, I was moved up one floor from Fraser Flight to become the rook-term CFL for MacKenzie Flight. It was Christmas before people figured out which one of us left!” He adds “I like to think I might have made something of myself if it were not for those missing two weeks and my traumatic start under the stern ministrations of Messrs Joelson and Huzzey…” Interestingly, many years later, the self-same Cdr (Retd) 11901 Gene Joelson, RRMC Class of ‘78, sent along the letter below commemorating Richard’s retirement, fittingly at the same rank as Nigel – Rear-Admiral – confirming that notwithstanding those few hiccups at the beginning, indeed Nigel had “managed to find some success in his own niche”, as of course did Richard.

Another Roadent classmate who made RAdm, Ty Pile, hosting Richard and Nigel at his official residence in Esquimalt, the Admiral House, during the Naval Boards in 2008. Bookending them are a couple of other ‘79ers, Capt(N) Pete Avis (not surprisingly, given his checkered history as a cadet, ignoring the direction to look at the camera) and Rich Gimblett, intrepid naval historian.

Interestingly both Pete and Rich needed to come up with ways to deal with the “Another One Like the Other One” problem. Rich divined that the key to distinguishing the two was the Engineer’s Iron ring that Richard wore as a MARE. Pete, on the other hand, indicated he “first used the hair to tell the difference: Richard’s hair was more swept back. But that would not do – most of MARS II had us all wearing berets! I then built a contingency plan to discern who was who: Nigel’s eyebrows flipped up (like a British Sea Lord’s) and Richard’s were more smooth. Decades later, the eyebrows were still helpful!”

Note: When this anecdote was first posted in Dec 2020, the story reminded Reg Best of another great Greenwood twins story. By way of background, Reg was in Fraser Flight with Nigel at RRMC and then later was in the same Mech Eng class as Richard during their final two years at RMC. Reg says in their fourth year a group of Roadents visited RMC, including Nigel, so the plan was for everyone to meet downtown at a pub. Reg’s girlfriend (now his wife) Nancy, who had met Richard before, was also going to meet them there. When Reg got to the pub, he found Nancy very upset about his “rude” friends who would not even stop to say hello. As it turns out, Nigel, who had never even met Nancy, had innocently walked right past her without stopping. Needless to say it was quite a shock for her when Reg introduced Nigel with Richard standing right beside him! Reg says Nancy and him still laugh about the story to this very day. Richard’s comment? – I do keep telling Nigel “you’ve got to stop not recognizing people I know …!”