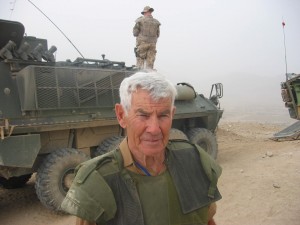 The recent passing of Peter Worthington, the highly-respected journalist and founding editor of the Toronto Sun, led to the publication of his self-edited obituary wherein he reviewed his life of adventure and challenge. Peter served under-age in the RCN in WWII and in Korea in 1952 as Platoon Commander of “Dog” Company and as Battalion Intelligence Officer, PPCLI. Some of our former seniors also served with valour in Korea including Herb Pitts (PPCLI), Dan Loomis (RCR), and Andy King (RCR), all of whom were recipients of the Military Cross (MC) awarded for gallant and distinguished services in action. Others from their RMC Class of ’52 were also sent to Korea immediately after graduation. They also served with distinction in the Korean War.

The extensive and well-deserved media coverage of Peter’s death demanded that we refresh our memories about the untimely passing of one of our own, #3301 LCol GJ (Gerry) Martin, in June, 1969. We learned much more than we expected. Gerry was at that time commanding the Fort Garry Horse Regiment (Regular), RCAC, in Winnipeg. He had taken command of the Regiment when it was being converted to a “Light Armoured Regiment” and in time for the new Lynx command and reconnaissance vehicles to come into service.

A mountain in the Yukon had been named “Mount Worthington” in honour of Peter’s father, MGen FF Worthington,CB,MC,MM, founder of the Royal Canadian Armoured Corps. Gerry was tasked by the then Corps Commander to lead “Exercise Worthy Venture”. The intent of this mission was to climb the mountain on behalf of the Corps, photograph the event, and leave a suitable marker at the summit (1994m, 6541ft ). Gerry’s regimental team included CWO RJ (Bob) Slaney, the Regiment’s RSM. Slaney would later on serve as RSM at RMC (1977-1980).

The team succeeded in climbing to the summit and installing the memorial marker. Tragically, on the way back down the mountain, Gerry fell from a precipice to his death. The team was evacuated from the mountain by helicopter, bringing a sad end to the expedition. On June 13, 1969, the Regiment with comrades and friends from across Canada, bade farewell to LCol Martin with full military honours. (See below for links to view photos of this first expedition and of a second climb made in August, 2001 by a team from the Fort Garry Horse and others, including two of Gerry’s sons, David and James, to re-dedicate the memorial. Many thanks, especially, to our classmate #3214 PC (Phil) Gunyon for discovering the existence of these magnificent and memorable photos.)

Many of us had never seen these pictures taken of Gerry until quite recently. Our classmate, #3334 MGen (Ret’d) DP (Dave) Wightman, reported a quite fascinating recollection: “Very painful to see that series of pictures. Obviously these were the last pictures of Gerry ever taken. When I was Commander Canadian Forces Europe in 1984, the Command Chief Warrant Officer was Bob Slaney. A finer soldier never walked the earth. I did not know of his connection to Gerry Martin, but one day in my office we were talking and because of his regimental background, I asked him if he had ever known Gerry. That’s the first and only time I have ever seen a tough, experienced RSM choke up, but he did. He was the guy who made a last desperate grab for Gerry but couldn’t reach him. What an awful memory to have to live with.

Bob Slaney was RSM at RMC for three years just prior to his tour in CFE and served there with equal distinction, I’m sure. He was the epitome of the senior NCO leader”. (See below a link to a 2009 e-Veritas interview with RSM Slaney.)

Another of our classmates, #3086 Col (Ret’d) ME (Marv) Rich, also recalled how he had connected with Gerry in Europe: “I replaced Gerry at HQ 2 Br Div in Germany in 1968. We were both exchange officers at the Brit Headquarters. The news of Gerry’s death came as a great shock to the Brit HQ community in Lubbecke. Gerry had been a very popular member of the Staff. My wife Anne and I moved into their married quarter after his departure. Gerry and I spent about two weeks together while he oriented me to the job and the people. We had a great time together. Gerry’s wife Lily helped Anne to get acclimatized and we got to know her during that period. A lovely, personable lady and she was a great help to our family. This was the first time I had seen any photos of the expedition, but Gerry’s smile brought back many memories. Upon reflection, it hardly seems true that almost 45 years have passed since Gerry and I last shook hands as he and the family left Lubbecke to head back to Canada where he was to take command of the “Garrys”. He sent me a letter when he got home safely, wishing me good luck in the job. That was our last communication.”

From classmate #3299 KGJ (Keith) McKey: “I shall always remember Gerry as the kind and generous “junior” from Duncan on Vancouver Island who invited a lonely “junior” from Northern Ontario to his home for what otherwise would have been a rather sad first “long weekend” at Royal Roads for me. When I was in the USA (‘60/’63), one of our neighbors was a General Bruce Clarke. On first meeting Gen. Clark he commented to me that he had very fond memories of two Canadians he had met in Germany, one a general, the other his aide, an officer about my age. They were attending some important event and Gen. Clark had not had time to shave. The young aide offered his personal razor to Gen. Clarke who very much appreciated this gesture. The Canadian general was Amy, the aide Gerry Martin. Small world! Gerry never let a bleeding nose interfere with a fight but he will be remembered by me for his kindness and generosity.”

Today a park in Winnipeg bears Gerry’s name. “Martin Park is a small green space on the north side of the McGregor Armoury (Cathedral Avenue and McGregor Street in the St. John’s neighbourhood of Winnipeg). It is named in honour of Lieutenant-Colonel G.J. Martin, CD, killed on a training accident June 9, 1969 and dedicated to all the officers and men of the Royal Canadian Armoured Corps who gave their lives for their country.” (See below a link to view this park and the memorial plaque.)

As Phil Gunyon has so aptly stated: “The ties that bind, forged during our youth, continue to hold us together”. In September, 2014 our Class of RR’52/RMC’54 will return to RMC to celebrate “60 Years Since Graduation”. We will, at that time especially, remember all of our “Fallen Comrades”, not least among them being one of the best, Gerry Martin.

Link to pictorials of “Expeditions Worthy Venture I and II”: